Since the coronavirus made in-person gatherings for live auctions temporarily impossible, auction houses have been overhauling their traditional methods of sale to attract buyers to online marketplaces. Christie’s has scheduled four times as many online sales between early May and June as it had in 2019, and Sotheby’s has kept itself busy with culturally relevant sales featuring coveted Air Jordans and a painting by the re-discovered genius Joan Mitchell. On Friday, Sotheby’s executives announced in a conference call that on June 29, they’ll offer buyers a live auction of contemporary art that will be remotely conducted by an auctioneer over livestream. Auctioneer Oliver Barker will be stationed in New York and will take bids from Sotheby’s specialists in Hong Kong, London and New York.

SEE ALSO: Photos of Brad Pitt and Barack Obama are Being Auctioned Off for COVID-19 Relief

Using the latest advancements in digital technology, all the fireworks of our marquee sales in New York will be streamed to you live this summer, as auctioneer Oliver Barker fields bids from around the world in real-time✨ pic.twitter.com/jwgIMKZnV1

Despite the fact that auction houses have been furloughing staff and cutting costs due to the pandemic, online sales numbers have stayed consistently strong. Earlier in May, Sotheby’s announced that their first-ever Contemporary Art Day online auction resulted in sales of $13.7 million, the highest total ever for a Sotheby’s online sale. Additionally, Sotheby’s also said that their global online sales have already crossed the $100 million mark in 2020, which is 370 percent more than they made in the same period in 2019. Christie’s has been clocking similarly encouraging numbers: a Christie’s Hong Kong online jewelry and watch auction recently fetched highest-ever sale totals, and their Open Online Only sales have also been resulting in impressive returns.

Both Christie’s and Sotheby’s have schedules in place that include streaming auctions and online sales, but Sotheby’s is kicking off its June 29 live-streamed sale with Triptych Inspired by the Oresteia of Aeschylus, a stunning series by Francis Bacon that’s estimated to sell for approximately $60 million. The message being sent by Sotheby’s seems clear: even though the supply chain for auctions and deliveries may have been slowed by the pandemic, they’re still counting on unswerving desire for quality from collectors to carry them through. 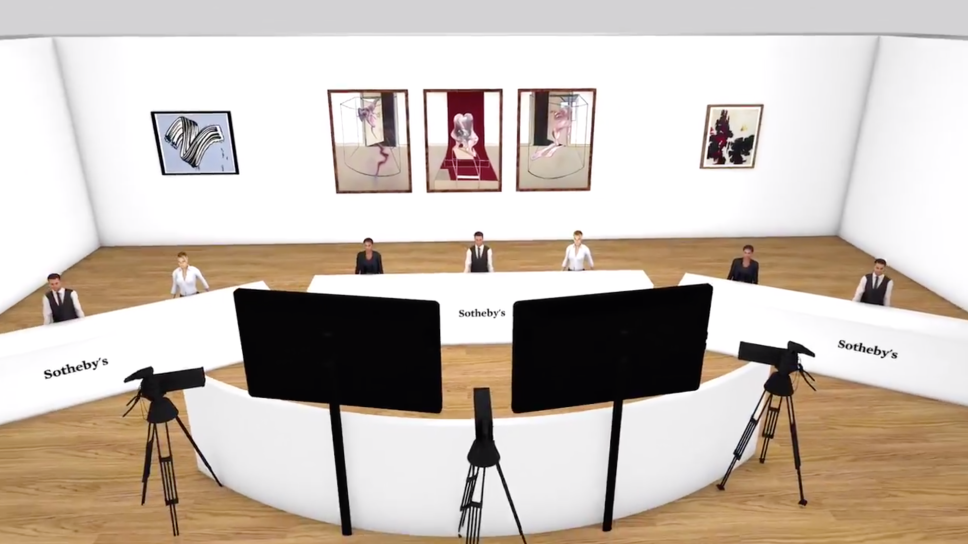