Last summer, Sotheby’s auction house made headlines around the world when it was reported that a single collector had snapped up every item for sale within the “Stadium Goods: the Ultimate Sneaker Collection” auction for an eyebrow-raising $1,287,500. The big sale indicated that rare sneakers were just as lucrative on the luxury goods auction circuit as watches and jewelry, and it also served as a definitive precursor to “The One | MJ’s Air Jordan 1s,” Sotheby’s current online auction featuring a single pair of shoes. The sneakers in question are red, black and white Nike Air Jordans autographed and worn by basketball superstar Michael Jordan in 1985, and it’s a sale that’s particularly relevant for our current cultural moment.

Over the last couple of weekends, sports fans confined to their homes by the coronavirus and denied their usual access to since-cancelled games have been riveted by The Last Dance, a 10-part ESPN documentary about Michael Jordan’s professional journey and the Chicago Bulls’ 1997-1998 championship season. The online Sotheby’s Air Jordan auction, which launched on May 8, will conclude on May 17, a date that coincides with the airing of the finale of the ESPN documentary. It seems that a welcome distraction has been found in the activity of obsessively dissecting Michael Jordan’s legacy, and the Sotheby’s auction caters to that exact need. Already, bidding on the 1985 sneakers has reached $160,000, which is $10,000 more than originally projected.

Accelerating interest in this particular pair of shoes has been sparked by the narrative of the documentary itself, which recently explored the origins of the Air Jordan phenomenon in detail. According to The Last Dance, Jordan initially was only interested in signing a footwear development deal with Adidas, and his mother Deloris Jordan had to force him to take a meeting with Nike. The rest is history: the initial fleet of Air Jordans produced $126 million in sales in their first year alone, and sneaker culture has proven itself to be an irrepressible force decades later. 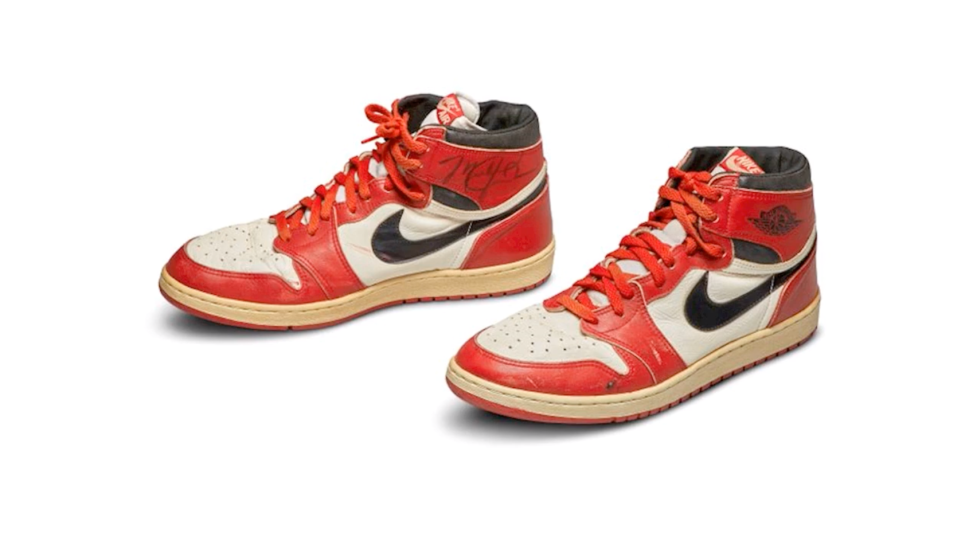