The world of Steve Carell and Greg Daniels’ Netflix series Space Force exists only a small step away from reality. Based on President Trump’s newly minted U.S. Space Force, the show imagines the events at a military base where Carell’s General Mark Naird has been tasked with getting “boots on the moon.” Like The Office or Parks and Recreation, everything is grounded in a sense of truth, particularly the sets and costumes.

Working closely with Daniels, production designer Susie Mancini and costume designer Kathleen Felix Hager created a visual aesthetic for Space Force that feels plausible, probably because so much of their work is grounded in real-world research.

“Initially when I first met with Greg, we had very lengthy discussions about the tone and it was really important for me and for Greg to be respectful of real military uniforms and to be true to the history of them,” Felix Hager explains to Observer. “To not make them a joke. The show has a quirky sensibility, but it’s very much based in reality. We really wanted to create a military look that was elevated and true to the history of uniform.”

“I wanted to be realistic because his comedy is based on realism,” Mancini agrees. “It’s based on a real branch of the military and it’s something, sooner or later, that we are going to see. It needed to work for the present day and be connected to the real world. We didn’t want to do Star Wars. We didn’t want to do Kubrick 2.0. We wanted it to be different than The Office and Parks and Rec. So it was a mix of reality with a more design-y look.”

The initial inspiration for all the departments was the idea of Dr. Strangelove meeting The Right Stuff. They wanted to stay away from futuristic space stories like Star Trek and veer away from parodies like Galaxy Quest, and consider how this branch of the military might play in the coming years. The Space Force base is located in the Colorado desert (although production took place in California) and Daniels and Mancini liked the idea of the military taking over an existing structure for the base due to budget constraints. That allowed Mancini to use Brutalism as her defining architectural style, which was built into interior soundstages and compiled using various exteriors around Southern California, including a university campus in Torrance.

“I embraced that look of cement that goes well in the desert environment,” Mancini says. “We research Brutalism for the actual architecture and then SpaceX for the functionality of the base. We worked with Army people who helped with suggestions of what an Army base really looks like and its functionality, and we collaborated with NASA people who told us what really happens at NASA and how these people work. We applied that to our sets. Everything is studied. So everything is entertaining, yes, but it also reflects some version of reality.”

The base’s launch room is based on the launch room at SpaceX, which uses big glass windows to invite its employees to peek in at launches. The technology in the room—as well as in Space Force’s space shuttle—is also inspired by SpaceX, which is why it looks so much more basic than the traditional space series or film. “It’s a very simple and modern environment that’s different from what we would expect,” Mancini notes. “But it’s what it is like today.”

General Naird’s office also has an unlikely inspiration: James Bond. The office pairs design elements with basic pieces in an attempt to steer away from Mad Men, and everything on the walls and shelves reflects on the general’s career in the Air Force. The room’s modern colors and heavy lines are meant to emphasize his strong presence.

“I see Steve Carell as a comedian, but I also see him as a man,” Mancini says. “As a general of a new branch of the military I wanted to underline his masculinity. I wanted to show the masculine side of his style that maybe his previous shows haven’t shown as much. I used James Bond as an icon for an attractive, masculine man, and used his style in the office. He’s a serious, military man and we wanted his office to portray that.”

Felix Hager also underscored General Naird’s masculinity in his costumes, using a brown leather bomber jacket to evoke Sam Shepard in The Right Stuff in several scenes. His street clothes come in blues and greys, with strong, clean lines, and stand in contrast to those worn by Dr. Mallory (John Malkovich), who wears looser, more textural pieces. General Naird’s uniform is based on research and discussions with military advisors (although no one from the real Space Force spoke with costume or production design). The idea with the military looks was to create a visual aesthetic that felt new, but was also deeply respectful.

“We very much wanted to do something that no one had done before on a military or space show,” Felix Hager says. “Because the show is set in 2020, Greg was very specific about not wanting the military uniforms to go in any sort of futuristic, Star Trek way at all. We really wanted them to look of the time and classic.”

Space Force’s signature blue camouflage uses a print from the moon’s actual surface, which Felix Hager created with a graphic designer. The costume department printed hundreds of yards of the fabric and made around 75 sets of fatigues, which used a real military pattern. “There was some discussion in the beginning of making it grey like the surface of the moon as we see it in our eyes, but we liked the idea of making it a color that popped out against all that concrete that Susie did,” Felix Hager says. “We wanted something that contrasted that.”

On the sleeve of each set of fatigues you can get a glimpse of the fictional Space Force logo, which was designed over two months by Mancini. She researched tons of logos, including the Starfleet Command logo that the real Space Force appears to have replicated, and wanted something that involved a lot of symbolism.

“I didn’t want to go with anything that was already done or was too basic or too futuristic,” she says. “I didn’t want to make it like the Star Trek logo—I wanted something that looked like it came from the government with government colors. It took a very long time, but I really like what we came up with. I like it better than the [real one].”

Both designers worked with consultants from SpaceX and NASA, as well as the U.S. Army. The spacesuits and the moon habitat used in Space Force could theoretically work thanks to all the background work.

“It was really important to get specifics and details correct,” Felix Hager says. “When we were doing all the research on the spacesuits they were really helpful with that, and we were able to make some minor tweaks to our design. We changed backpacks and we changed patches—things like that. We went with the reality of what they could actually come up with in that short amount of time, so we used an existing spacesuit pattern.”

“We had to gather what the research brought us as the honest or probable,” Mancini adds. “Whatever made the most sense for a real moon habitat. We landed on the inflatable version of the moon habitat, which is a prototype that actually exists and many companies are making them. What we created tried to speak to reality as much as possible.”

While the sets and the costumes are largely not meant to be part of the jokes of the show, Felix Hager did get an opportunity to design a few ridiculous Space Force uniforms. In one of the early episodes, FLOTUS asks General Naird if she can take a crack at designing a new uniform for the military branch. Unable to dodge her request, several of the Space Force personnel end up in flashy, unfunctional looks (which include a glitter “Space Force” across one character’s butt).

“Some of it was scripted and some it was ‘Go and do what you want to do and show us what you come up with,’” the costume designer laughs. “I did a lot of goofy things, like capes. I did a lot of research into Eastern European military uniforms that are very ornate.”

Then it came time to show them off. “We did a parade of them through the writers’ office to make sure they were okay and the whole writers’ room burst out in this huge laugh,” she says. “It was a good day for the costume department.”

Space Force is available to stream on Netflix. 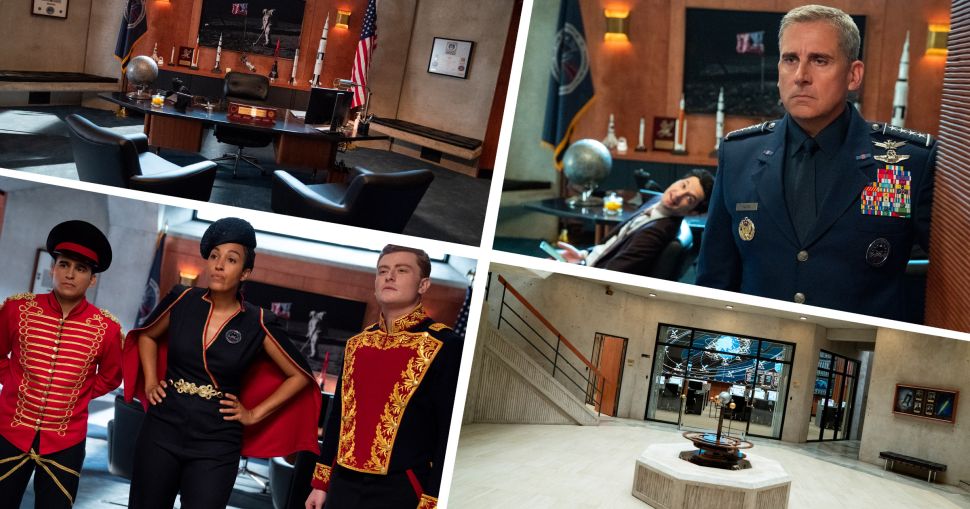