Star Wars has some of the best villains in modern fiction. Ever since the introduction of Darth Vader, the series has featured terrifying figures who also looked so cool they inspired more cosplay than the heroes themselves. But there’s one villain whose role in the franchise was cut short before being given a second chance at life and revenge: Darth Maul. Despite getting lightsabered in half and thrown down a reactor shaft in The Phantom Menace, Maul (originally played by Ray Park) came back to life in The Clone Wars, where he became one of the most tragic characters in the entire franchise.

When we first meet Darth Maul in the series’ first prequel film, he’s a mysterious apprentice to the titular menace that is Darth Sidious. Despite playing a prominent part of the movie’s marketing, Maul only has a total of 31 speaking lines in the entire film, and he was quickly replaced as a villain in the prequel trilogy—first by an old man and later by a cyborg with a severe cough. You could boil his entire role down to looking badass and killing a single Jedi before losing his legs.

Of course, Darth Maul remained popular with fans, and how couldn’t he? He had a double-bladed lightsaber and horns coming out of his head! So when George Lucas tasked Dave Filoni and his writers on The Clone Wars to bring Maul back from the dead, without much explanation as to how, the former Sith returned in animated form, voiced by Sam Witwer, with a new set of arachnid robot legs and a newfound thirst for revenge.

SEE ALSO: The Final Arc of ‘The Clone Wars’ Is the End of an Era for ‘Star Wars’

But with deep anger for Obi-Wan Kenobi, the man who cut him in half, also came a tragic backstory for Maul, in addition to a whole lot of losing. It turns out that Maul was stolen from his home planet as a child and raised to be a murder machine. And when we meet him again in The Clone Wars, Maul is given a sibling, named Savage Opress. The Clone Wars then dedicated several episodes to Maul’s sad attempt at getting back his former master’s favor, going so far as to control a crime syndicate to prove his worth as a player in the grand Sith plans. Of course, by this point, Sidious already had another apprentice, Darth Tyranus, and was eyeing Anakin Skywalker to become his ultimate instrument of destruction. Even when Maul and Opress tried to kill Sidious, they could barely make him sweat before Sidious easily killed Opress and force-lightninged Maul to submission.

Thus Maul became as much a victim of Sidious as Anakin was. Both were manipulated into becoming pawns in a larger scheme, only to be tossed aside as soon as a better candidate (Anakin instead of Maul, Luke instead of Vader) came along. And what of Kenobi? Though Maul challenged him several times to a re-match, he lost each and every one of them. No matter how strong with the dark side of the force Maul was, it was never enough to defeat his greatest enemy.

This tragic side of Maul became most evident in the “Siege of Mandalore” arc of The Clone Wars, which served as the show’s finale. Maul took over the entire planet of Mandalore to bait Kenobi into facing him, even killing a former romantic interest of Obi-Wan to spite him. Of course, it is not Kenobi who comes to liberate Mandalore, but Ahsoka Tano. As we see in episode 10, “The Phantom Apprentice” Maul orchestrated the entire invasion of Mandalore because he knows that Sidious’ plan to take over the galaxy and eradicate the Jedi is about to come to fruition. Having turned from an ambitious avenger to a twisted and scared man trying to ruin his former master’s plan, Maul pleads with Ahsoka to help him destroy Sidious. He’s the only one who knows that the Clone Wars have ended, and the Republic has already fallen, but no one else can see it yet. So after he loses his fight with Ahsoka, Maul makes one last desperate attempt not to win, but to be killed by her. Knowing Sidious is about to win made Maul more afraid of what will happen to him and the rest of the galaxy than of simply dying there and then.

After a brief appearance in Solo, the next time we see Maul is in Star Wars: Rebels, where he’s become a desperate zealot who has abandoned any aspirations to becoming a Sith Lord. When he meets the series lead Ezra Bridger at the end of season 2, Maul opens up to him.

“The Sith took everything from me,” he says. “Ripped me from my mother’s arms, murdered my brother, used me as a weapon, and then cast me aside. Abandoned me. Once I had power. Now I have nothing.” His only hope is discovering the secret to defeating the Sith, which is on Tatooine with Obi-Wan Kenobi. After challenging his Jedi nemesis for one final fight, Maul is finally struck down. Completely defeated and nearing death, yet finally free of suffering, Maul collapses into Kenobi’s forgiving arms and says that Luke “will avenge us.” At that moment, Maul embraced his role as a victim without a destiny.

Maul’s legacy is of failure and resilience. He failed to become a Sith master, failed to kill his sworn enemy, failed to avenge the death of his brother, failed to stop Sidious and even failed to get killed when he wanted to. But all of this began because George Lucas decided to bring the former Sith apprentice back from the dead, a decision that helped turn The Clone Wars from a fun addition to the franchise to an essential part of the story of Star Wars.

Star Wars: The Clone Wars, which ended this week, is available to stream on Disney+. 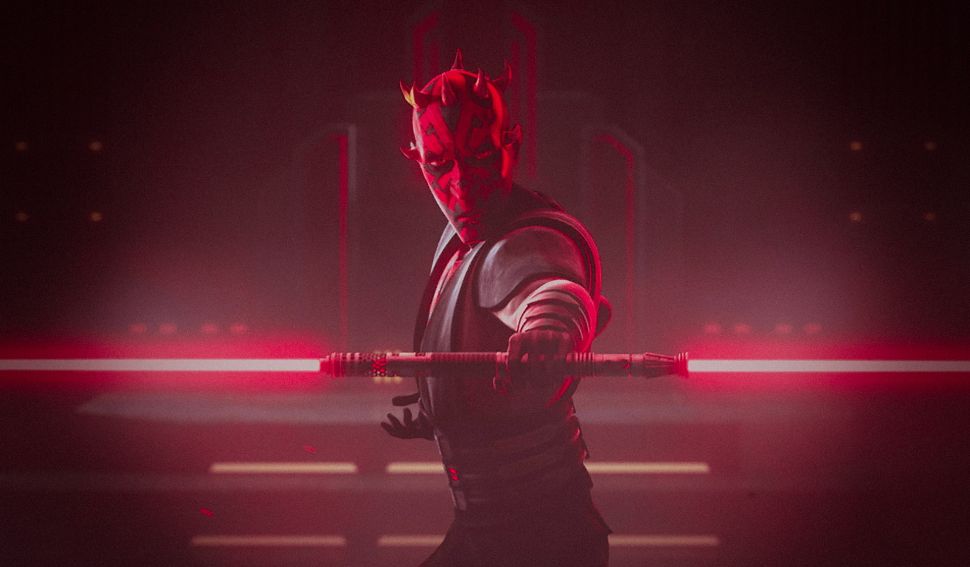