Today, Star Wars and the blockbuster franchise entertainment it inspired has become the monoculture; what was once on the periphery of cool is now mainstream. But 40 years ago, even in the aftermath of the 1977 Star Wars phenomenon, The Empire Strikes Back was still fraught with risk. George Lucas, director Irvin Kershner and co-writers Leigh Brackett and Lawrence Kasdan were pushing the cinematic medium into new ranges of possibility. Star Wars may have been popular right away, but innovation is rarely without setbacks and the public is not often inclined to embrace the new and different. In the end, it took a two-foot tall green puppet with backwards syntax to transform Star Wars from a phenomenon into a legacy.

In ’77’s A New Hope, Obi-Wan Kenobi gently saunters into frame and immediately becomes the conduit for a grand new mythology. Alec Guinness, in all his masterful exposition, provides the background and context for the Jedi.

“The Force is what gives a Jedi his power,” he tells Luke and, by extension, the audience. Obi-Wan explains what a lightsaber is (“an elegant weapon from a more civilized age”), reveals select truths about Luke’s lineage (from a certain point of view), and recounts that the Jedi Knights were the guardians of peace and justice in the Old Republic for a thousand generations. In essence, he is the narrator of an operatic space fantasy overflowing with fantastical possibility. Obi-Wan Kenobi conveyed everything we needed to know about this galaxy far, far away.

And then he died.

Yoda, who audiences first encountered when Empire premiered May 17, 1980, was initially conceived as a reliable stand-in mentor for Luke, someone to continue his training in the ways of the Force. But he soon grew into a legend as our hero’s moral guide and the vehicle for the biggest ideas behind Star Wars.

“I wanted Yoda to be the traditional kind of character you find in fairy tales and mythology,” Lucas said in Laurent Bouzereau’s book Star Wars: The Annotated Screenplays. “And that character is usually a frog or a wizened old man on the side of the road. The hero is going down the road and meets this poor and insignificant person. The goal or lesson is for the hero to learn to respect everybody and to pay attention to the poorest person because that’s where the key to his success will be.”

SEE ALSO: ‘The Clone Wars’ Made Darth Maul a Menace We Could Love

If Obi-Wan supplied the necessary context behind the Jedi, it is Yoda in Empire that provides the philosophy. “Luminous beings are we,” Yoda tells Luke in an attempt to expand his worldview and, in essence, unfold the mysteries of the Force. There’s a poetry to Frank Oz’s backward speech and a rueful wisdom to his lessons. It is Yoda who first warns that the path to the Dark Side begins with anger, fear and aggression. It is Yoda who instructs that Jedi use the Force for knowledge and defense, never for attack. It is Yoda that cements the Jedi as zen warriors meant to act in balance with the universe around them.

The framing Yoda brought to the series—of a bygone era of civility saturated with space samurai that upheld nobility—is what alchemised the shock and awe of early Star Wars fans into devotion.

Luke’s journey grows ever more intricate and compelling the moment destiny brings his X-wing hurtling down to Dagobah. Lucas’ knack for world-building has never been channeled so effortlessly, gently applied through Yoda yet immediately engrossing. Yoda is a huge subversion of our expectations when we first meet him. An 800-year-old master who oversaw centuries of Jedi is… a little green man? The boundless wisdom of the cosmos resides in… a cackling little trickster who makes a mess of Luke’s camp? But through Yoda, we come to understand more of what the Jedi represented to the galaxy: an aspiration, an ideal. As a result, we then come to understand exactly what the galaxy has lost.

Today, Yoda stands as an icon of cinema. Our hindsight, with knowledge of the Jedi fall and Yoda’s failures, only strengthens our perception of him as a multi-layered being exorcising his own demons right alongside Luke.

But in 1980, Lucas and his team were gambling the fate of their phenom on the decidedly non-broad shoulders of a tiny, green, frog-like puppet. Star Wars may have been propelled by exotic space creatures borne out of prosthetics and special effects, but none were required to deliver fate-altering exposition while carrying the emotional burden of a legion of fallen heroes. That’s a lot to put on a non-human co-star and a lot to ask of audiences to accept. Even the effects artists were aware of the lunacy as they explored countless other options—including a monkey with a mask!—before resorting to puppeteering, according to J.W. Rinzler’s book The Making of Star Wars: The Empire Strikes Back.

But as Yoda famously said: “Do or do not. There is no try.” The Empire Strikes Back most certainly… did.

“In his range of wisdom and emotion, Yoda may actually give the best performance in the movie,” Roger Ebert wrote in a Star Wars retrospective in 1997.

The Hollywood Reporter‘s Arthur Knight shared that sentiment, writing in his 1980 review: “I’m still not certain whether he’s a skillfully animated puppet or a real live human being. Whichever, he’s one of Lucas’ strongest assets in this Star Wars incarnation.” The Los Angeles times‘ Charles Champin described Yoda in that same year as an “absolute enchanter” and a “delicious invention.”

Beyond the cutting edge character design, Yoda’s divine humanity is what (partly) connects us to this franchise—as in every film classic, it’s ultimately what touches our hearts.

Entertainment has always seen the conflict between art and commerce just like Lucas’ galaxy has always seen the battle between the Light and the Dark. But in Yoda, Lucas had created the rare character that could astound film critics as a technical and thematic revelation, become a beloved paragon of pop culture, while also serving as the hottest selling toy of the year. He melded creativity and capitalism in a way that pleased everyone—an impossibility in today’s fractured and fragmented ecosystem.

There’s a reason Yoda has been recreated in every conceivable medium since. He stands the test of time. His archetype, the wise old man as a profound philosopher, draws inspiration dating all the way back to Merlin, and Yoda’s influence on the classic trope extends forward to beloved figures such as The Karate Kid‘s Mr. Miyagi and Avatar: The Last Airbender‘s Iroh. The films even sparked a global religious movement of sorts in 2001. He is a guide, not only for our protagonists, but for those of us who watch with bated breath.

There’s an argument to be made that the Jedi and their encompassing mythology are the most enduring and alluring elements in all of Star Wars. So much so, in fact, that Rian Johnson‘s The Last Jedi dismantled the paradigm in order to build a new foundation for the franchise. When we finally understand Yoda’s true identity in Episode V, he personifies this sprawling and magnificent collection in a way that expands the idea much farther than A New Hope. We understand not just the function and responsibility, but also the soul of a Jedi.

If Obi-Wan provided the who and the what in our understanding of the Force, Yoda supplied the why and the how. In that sense, he is the vessel of our curiosity, and the light that showed our way to the Force.

Star Wars: The Empire Strikes Back is streaming on Disney+. 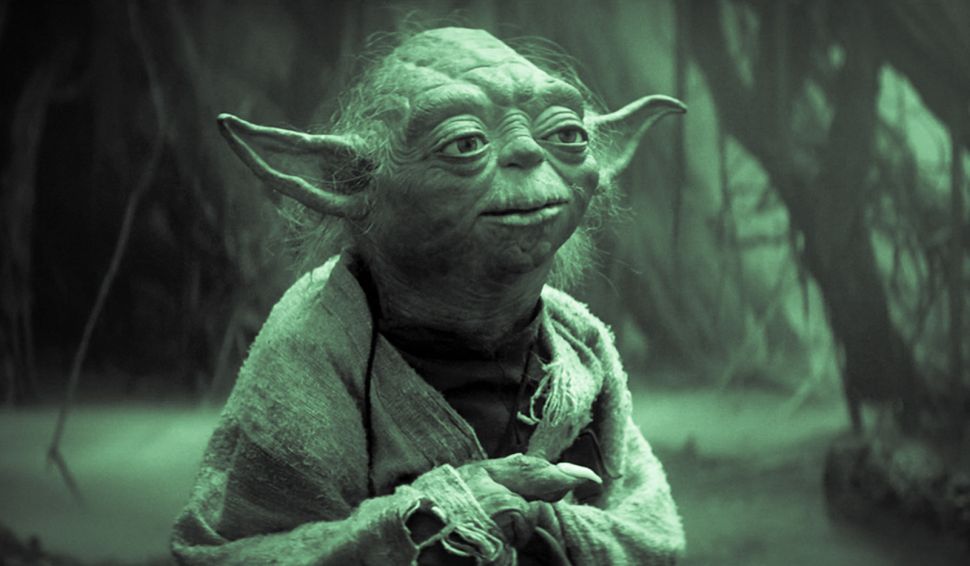