In an era of instant viral fame, Rob Brydon has taken a very long and winding road to renown in the United States.

In 2009, Brydon was a successful comedian and sitcom star with a solid following in the UK. Then he teamed up with Michael Winterbottom, the prolific filmmaker, and Steve Coogan, a fellow British comic actor of slightly more international renown, for a BBC miniseries called The Trip. Initially a one-off project, it became an on-and-off decade of traveling across Europe. The guys visited exotic resorts and hidden monuments while gorging on local cuisine, dueled through impressions of Oscar-winning actors and recited passages of great works of literature, and needled one another about their various shortcomings.

It couldn’t sound more niche, but The Trip series—with installments in Northern England, Italy, Spain and now Greece—struck a chord with audiences around the world in a decade rife with economic upheaval, disaffection and memes. Throughout their journeys, Brydon and Coogan joust and jest while working through their personal and professional frustrations—it’s all lightly scripted mockumentary, featuring exaggerated versions of the two men and their hang-ups.

Coogan, best known for his iconic and idiotic TV presenter character Alan Partridge, is a divorcé who is depicted in the series as perennially frustrated by the elusiveness of true international fame; The Trip’s version of Brydon is a happy father of a newborn who is content with his level of fame, which has come largely from playing sweet (if sometimes thick) workingmen characters and dishing out a variety of voices on the TV and radio panel shows. Still, he has his own troubles, which become apparent over time. They are two privileged men wrestling with upper-class problems, but their vulnerability and mistakes are universally relatable, especially as audiences sit at home, isolated and in many cases, completely out of work.

All four TV miniseries were cut down into movies that were subsequently released in the United States, and the fourth (and supposedly final) installment in the series, The Trip to Greece, becomes available on-demand on Friday. Observer spoke with Brydon about the trips through The Trip, what he learned throughout the process, the insults that went too far and how his real self differs from the Rob Brydon he portrayed on screen.

Observer: The dialogue is largely improvised, but as the series has gone on, has it gotten more collaborative in terms of writing the character arcs and the journeys you want these fictional versions of yourself to go on?

Rob Brydon: They’re authored by Michael, it’s very much him. We color it in—he draws it in and we color it in. We don’t really talk much about where the characters go, he gives us a document at the beginning. So for Greece, he said you’re following Odysseus’s route. These are the places you’re going to, there are a few plot-related things that happen in this one, it builds to something happening at the end, which affects what happens near the end. And then with things we have to say for the plot, those are Michael’s words. But then when it gets to the funny stuff, the stuff that people quote, that is almost all improvised.

The movie’s Steve is upset that he’s not more famous and he rips on “you” for being even less known. Has that been difficult at all? How have you felt about your career as these movies have developed?

In real life, I’d say I’m good, I’m pretty content. I’m not someone who has to be number one, has to be the biggest. I’m not someone who subscribes to this idea of more, better, best, of there being something bigger and better around the corner. The thing I always say is I’m very happy where I am, but I wouldn’t like to go backward. I’d change things if I started to slide.

I suppose it’s just exaggerations of how it really is. So, certainly in real life, Steve has gone off to America and done very, very well. In reality, I applaud that and celebrate it. Whereas in The Trip, I irritate him and I try to undermine it, because that’s what works. for comedy. Michael often has to say, “right, have a go at it,” whereas I myself would say, “whoo, tell me about this film, tell me about that film, tell me about this person or that person.”

There’s a joke in The Trip to Greece where you ask one another what you’re most proud of. Steve says “my 7 BAFTAs” and you say “my child.” And I think over the course of four films, Michael is laying out that you can grow older and either be dissatisfied with your accomplishments or look back on them and realize how hard it was to get there at all.

I’m very much in the second camp for that. But the lines you mentioned are quite interesting. The line is, “What are you most proud of?” And he says, “Oh, my seven BAFTAs, what about you?” And then of course, trying to pull the rug out from under him, I say, “My children.” And then he says, “That’s because you haven’t got any BAFTAs, right?” And then I say “Yes, but you do have children.” That’s interesting, right? It’s a line that quite a few people picked up on in press coverage, but often leaving out the last line, which I thought made it a complete thing.

That’s just an exaggeration, though—I’m looking at them now, I have several awards, though I’m embarrassed to say that to you in an interview. But it’s just to illustrate the point. We just filmed this thing, Steve and I, called Big Night In, which was a charity night, and we did it via Zoom. I filmed mine in the office I’m in now, and he filmed his in his office in his house. For the filming of it, he brought some awards and put them behind him on the shelves. And from my filming, I deliberately pointed to the camera towards a shelf full of photographs and things.

A lot of people think [The Trip movies] really are the reality, and I can understand that, because it’s just a warping of reality. It’s as simple as changing the camera in a slightly different direction because that’s the story you want to tell.

To that point, your wife in The Trip series is named Robin, just like your wife in real life. In The Trip to Italy, you cheat on your wife, which I took as an element of competitiveness with Steve, who sleeps with a number of women throughout the series.

The reason that happened is because Michael wrote it. I remember Michael saying that we’ve got this idea that you do this. And it appealed to me only because I knew it would upset expectations. It wouldn’t be expected. Because generally in my career, I don’t get to play those kinds of scenes very often. I felt like I was in a Richard Curtis film. I was sitting on a beach, trying to be drunkenly charming. It appealed just on a visceral level without really a thought of what people would think. Because to me, it’s always been obvious that it wasn’t me playing the part.

I watched some of these movies with my wife, and she was shocked.

I think a lot of a lot of people were really cold and very, very cross about it. I still see stuff on social media, people are saying either jokingly or not, “I’ll never forget what he did to his wife.”

Much of the series is you and Steve ribbing one another. Obviously you’re friends in real life, but from the very start, it’s an awkward on-screen relationship. Did the insults ever cross a line or get too personal?

That happened. I think in each one, there would be a point where we go too far and touch a nerve. We had an agreement at the beginning that we could pretty much say that we wanted. But yeah, there would be times when you think, Wait does he really mean that? Or is he just exaggerating?

There was a moment in the Greece series, at the restaurant at Perea at an indoor restaurant near some boats. It’s where we talk about Marathon Man and Steve having a heart attack. I said something to him that he wasn’t happy with, and I think we had to stop for a little bit. But then it’s forgotten about.

Over the years, I think he and I have become more relaxed with each other, and I think it’s a side effect of getting old—you value your friends more. It’s also exhausting to keep having conflict. One of the problems I’ve had with the series over the years, and I think Steve would agree—I’m not sure, but I think he would—was waking up in the morning or sitting down at the table and going, “Well, I’ve got to be horrible again now and we have to start picking at each other and if we’re improvising I’ve got to invent nasty things to say.”

And yet, I’m also aware that that gives it a lot of spice. It’s a trade-off, but I think the characters on screen have softened towards each other over the years. And in reality, I think Steve and I are like any blokes in their mid-50s. You change and you’re aware of the distant ticking of the clock, so you enjoy each other more.

The celebrity impressions are such a big part of the series. It struck me that you were doing largely impressions of people a generation older than you, mostly Brits, but you’ve now sort of stepped into positions they were in all these years later.

The thing about the impressions that I like is that they’re almost always very affectionate. Some people use impersonations as a tool to criticize someone, like Trump or whoever. If I’m doing someone’s voice, it’s always the person that I like. And I think that in The Trip to Italy, us as Roger Moore and Michael Caine, talking about the passing of time, I find that quite touching because I suppose we are talking in the voices of these cinematic men that we’ve grown up looking to.

So that scene when we’re talking about [British director] Michael Winner having died, it’s all quite melancholy but I think it’s rather lovely. And in a sense, we’re talking about ourselves and the knowledge that one day one of us will go before the other one. Unless we’re both taken out in a freak skiing accident, the other will be left behind. It’s that melancholy side, the wrestling with mortality that I’m very fond of.

This interview has been condensed for clarity.

The Trip to Greece is available on VOD Friday, May 22. 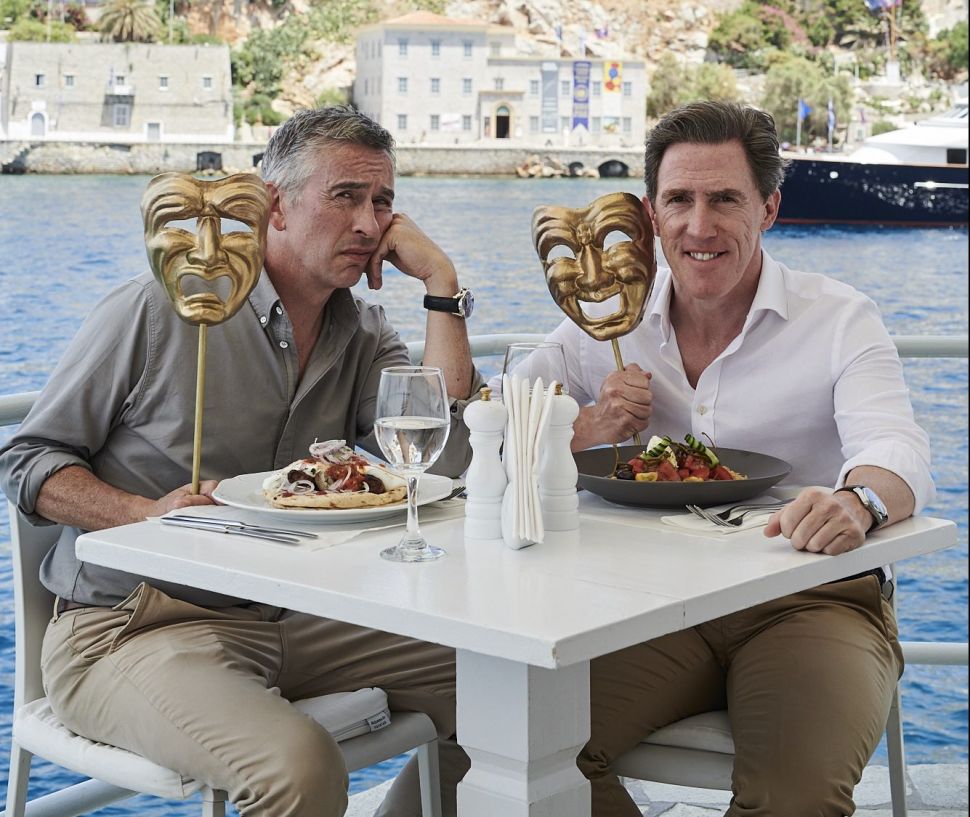