With Trump cultists spreading more disease across our pandemic-ravaged nation, a nakedly plutocratic Senate enabling a racist dictator, and cities burning over the police murder of unarmed black citizens, one might gaze enviously at the political woes of another country in another era. London’s National Theatre is happy to oblige. Now through June 4, the wonderful NT offers free streaming of This House on its YouTube channel. The 2012 James Graham play chronicles the triumphs and failures of the “hung Parliament” from 1974 to ’79, a period of hairsbreadth vote-scrounging as Labour fought bitterly to maintain power in Westminster, barely keeping the soon-to-be Thatcherite Conservatives at bay.

For those whose eyes started glazing over at a “u” in Labour, let me spell it out: the Labour Party equals Democrats and Conservatives are Republicans. But since the British legislature is multiparty, there is a sizable mass of small groups such as the Scottish National Party, Independent Socialist, and Liberals Democrats. Because Labour in 1974 had only a slim majority, to win votes they had to pull a significant number of these “odds and sods” to their side. Graham’s play finds the humor and pathos in the dueling engine rooms of the Parliament: the offices of the whips—the party bosses whose job it is to round up yeas for various bills.

Here’s an exotic Parliamentary practice you’ll learn: pairing. When a member of your party can’t be at Westminster to vote, you may request the other side excuse one of their members. “We are gloriously unique, this country,” says silky Conservative whip Humphrey Atkins (Julian Wadham), “in not having a written constitution. What we do have are traditions, gentlemen’s agreements. They help us do what we do best: muddle through.” One particularly agitated scene occurs in the aftermath of a vote where pairing was not honored and the chamber erupts in anger. Conservative MP Michael Heseltine infamously grabs the huge ceremonial Mace and threatens his Labour counterparts with shouts of “Cheat!”

Graham tightly packed script and an admirably crisp and lucid staging by Jeremy Herrin make the long parade of characters and political maneuvers fairly easy to interpret. The Labour lads  (and one lass, played by Lauren O’Neil) swear freely in broad Northern or other regional accents, constantly abusing the “Alastair twats” across the building. For their part, Conservative gents are marked by excellent Saville Row suits, plummy diction, and witty ripostes. In England, you can get away with this sort of classist caricature because, well, it’s their reality. It’s also great fun to see the 15-odd ensemble jump in and out of multiple characters, trading a Scot’s burr for a twit’s burble in mere seconds. There’s even a rock band on the upper level, reminding us that it’s the groovy-yet-angsty ’70s with an aching cover of David Bowie’s “Five Years.”

If you devoured The West Wing and House of Cards, you may slip easily into This House, an equally energetic anatomy of democracy in action—or inaction. The NT Live filming is surprisingly dynamic, with the camera pushing into the chamber during voting and panning around like it’s a football match. Almost a hybrid of past BBC comedies Yes, Minister and The Thick of It, Graham play is salty, funny, swift, and ultimately heartbroken by how easily his country slipped from a progressive vision of governing into the heartless corporate conservatism of the Thatcher years. It’s not so much a satire as a lament. “The Conservative government eventually falls because they believe themselves entitled to power. And Labour governments always fall because they don’t,” says Cockney Labour whip Bob Mellish (Phil Daniels). It’s a neat Shavian quip, one that cuts close for our self-defeating Democrats. After you’ve finished This House and switched windows to follow the chaos in Minneapolis or Washington, it’s a foregone conclusion the other side should take over and start repairing the damage. And then, after November, some clever playwright can get their arms around Capitol Hill and tell us what really happened in the last unbelievable five years.

Update: An earlier version of this review misidentified the author of This House. It was written by James Graham, not James Morris. 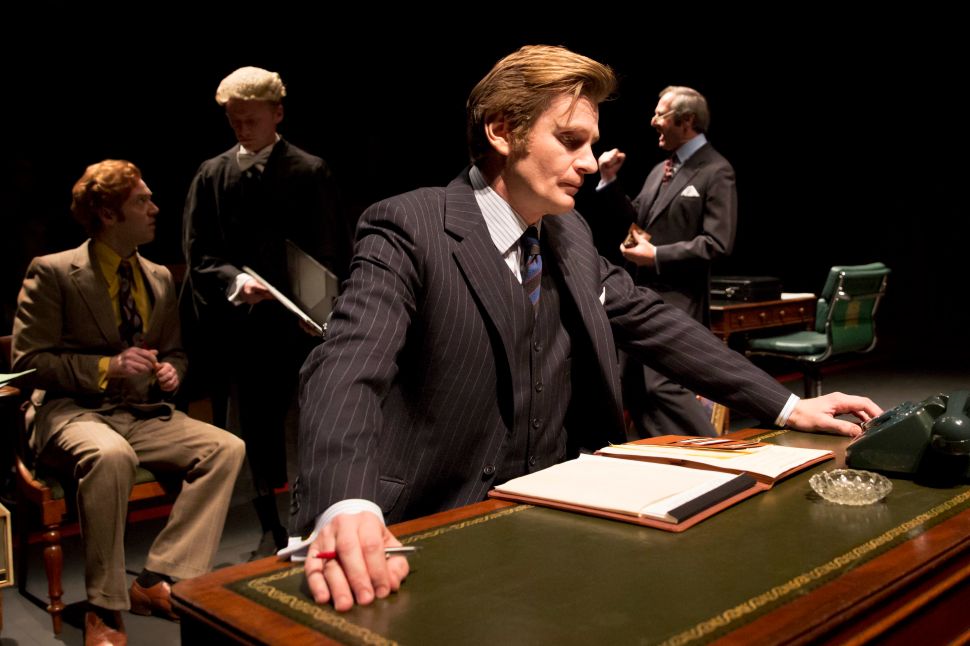