In the earliest moments of Tonight We Riot, the recently released video game from Texas worker-owned coop Pixel Pushers Union 512, a pair of pixelated, flag-waving workers square up against riot cops. “There’s only one way through,” a speech bubble from your comrade reads. “Direct action!” Through the side-scroll brawler, you liberate and rally a growing crowd of workers fighting against an evil capitalist regime. You don’t control just one protagonist; instead, you control the movement. When your avatar is killed, you simply control another worker in the group.

“As long as one of us survives, the Revolution will live on,” another text pop-up proclaims.

As an “unapologetically anti-capitalist” release, Tonight We Riot arrives in a time of need. During the pandemic, labor crises and inhumane treatment of workers have rocketed into the spotlight. While Jeff Bezos barrels towards trillionaire status, Amazon workers are reporting worsened conditions and lower pay. Pre-pandemic conditions that were suspect at best are now being recognized as exploitative and evil. Rarely has there been a better time to jump into a fiction where you and your coworkers fight against the tyranny of a money-hungry regime and build a more equitable world for all.

Tonight We Riot is an explicitly socialist offering in an industry that often flirts with but rarely commits to these principles. Influential titles like Bioshock, Borderlands, and The Outer Worlds have, in their own ways, prodded at the cruelties of capitalism. Video game critic Carli Velocci dubbed capitalism the most significant in-game antagonist of 2019. But PPU512 founder and art steward Ted Anderson and programmer Stephen Meyer, the co-creators of Tonight We Riot, wanted to push the needle further.

“What if we just made an honest-to-goodness leftist game that is unapologetically so, where we show that [leftist] structure, we show that there could be this fight, that it could have an actual culmination, that we could go somewhere with it?” Anderson tells Observer about the idea behind Tonight We Riot.

“On one level, it’s a cute little pixel art game,” says Meyer. “But on another, there’s a mechanic here that’s different from normal game mechanics where there’s one protagonist embracing this ‘great man’ theory of history. No, no, no. It’s the movement. It’s the people rising up.”

Like television, film and books, video games are a space where worldviews are shaped, and culture is produced and reproduced. Meyer references the popularity of military shooter games as a cultural force. “They’re sort of this neo-conservative fantasy,” he says. “Up until grad school, I still had that view of ‘military might makes right.’” But while TV and movies are subject to rigorous analysis in mainstream media sources, video games aren’t subject to the same level of scrutiny outside of the gaming community.

“There’s a lot of games that people assume aren’t political just because they see games as being set aside from other media [or] divorced from the reality that we all share,” says Anderson. “It’s still made by people, and people have lives and biases, and make decisions unconsciously where those biases align.”

Tonight We Riot is published by Means Interactive, the newly minted video games arm of worker-owned leftist media company Means TV. Naomi Burton, who cofounded Means along with Nick Hayes in Detroit, explains that they’re in talks with a number of similarly aligned developers. Means’ deals are structured such that the majority of sales profits go to developers, while Means takes a small percentage. The coop’s profits are then allocated to the next project.

“There hasn’t been a game explicitly about toppling capitalism before,” says Burton. “Seeing those anti-capitalist values that over 50% of young Americans have reflected in a video game makes all of us feel seen and heard, and reminded we’re not alone in the fight for a better future.”

Gaming communities are committed to this vision, too. Socialist Gamers is a community for left-wing gamers to build solidarity and counter far-right gamer culture. “They wanted to carve out a place for leftist video game fans to meet and connect without the toxicity that’s all too prevalent in online gaming culture,” says Leslie, a Boston-based gamer who connected with Socialist Gamers in 2017, and who asked to be identified by her first name. “The industry itself still has a long way to go in terms of being more accessible and less misogynistic, but the themes and messaging that games are sharing with players are getting more and more revolutionary, and I think that’s absolutely a good thing.”

Socialist Gamer staff member Brian, who lives in West Virginia and also asked to be identified by his first name, seeks out releases that align with his left-wing values, but says that while many studios and developers are liberal, most aren’t anti-capitalist. “There’s a large untapped market for leftist ideals to be in video game narratives, but developers are not in any way incentivized to make explicitly leftist games,” he says.

California-based gamer Quinny Cascade is heartened by the visibly radical bent of Tonight We Riot and similar works. “[It] was made for me,” she tells Observer over Twitter DM. “Or rather, it was made for Us. Much of any media’s intellectual, emotional, and social priming is representative of the status quo. Deviating from that formula can genuinely upset people.

“I’m a Native American, Pakistani trans woman with ADHD, and I’m aggressively and empathetically leftist as hell. I’m also angry, loud, and dark skinned. Most things are not created with me in mind… [Tonight We Riot is] no more political than any other game is, it just reflects the voices of the unheard.” Cascade adds, “I think the truth is that most people are anti-capitalist, they just don’t know it yet.”

The lethal and imbalanced conditions forced by COVID-19 are disproportionately impacting communities that were already marginalized and targeted, a pattern that holds true in the gaming community. “Most folks who play video games now are people of color, and almost half are women,” says Leslie. “Essentially, those who have been most affected by COVID-19. The workers who help make our favorite games get laid off while executives are basically unaffected.”

But Leslie also highlights community-building creativity in Animal Crossing and fundraising efforts led by streamers as examples of organizing in the community to counter—or at least mitigate the misery brought on by—the pandemic’s oppressive conditions. Game Workers Unite is an international organization building towards unionizing the game industry, while other worker coops like The Glory Society, founded by Night in the Woods co-creators Bethany Hockenberry and Scott Benson, and Motion Twin continue to create video games that are the product of equitable working conditions.

This mutual support and collectivism, says Anderson, are the only threats posed by Tonight We Riot’s socialism. “A socialist is only threatening those rich people with living at the same level that everyone else already has to live, but improving those conditions to the point that that’s not terrible anymore,” he says. “These aren’t unreasonable demands, these are demands for life.” 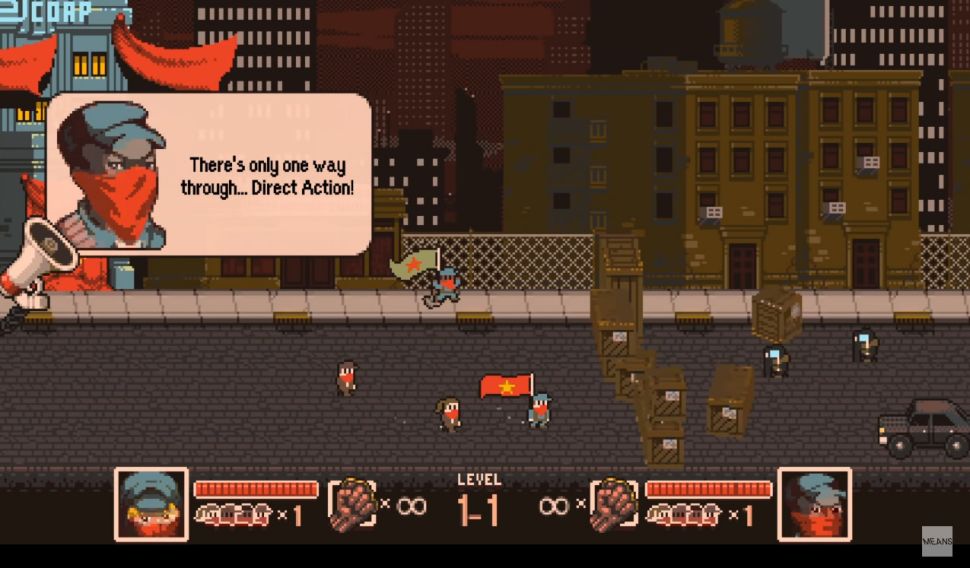