When Yorgos Lanthimos’ wry period comedy The Favourite came out in 2018 it felt like a revelation. Its dark, quick-witted brand of humor—and loose fixation on historical fact—offered a potential new way to showcase the stories of the past. The film seemed to inspire a new generation of funny historical pieces, including Apple TV+ series Dickinson and Hulu’s new 10-episode series The Great. But The Great, a fast-paced historical comedy about the rise of Russian empress Catherine the Great, is actually the original spark that lit the flame.

Over a decade ago, Australian playwright and filmmaker Tony McNamara, the Oscar-nominated co-writer of The Favourite, had an idea to write something about Catherine the Great. He ended up penning a two-part play about her life for the Sydney Theatre Company, which was then under the artistic direction of Cate Blanchett.

“As a playwright I always wrote contemporary comedies and I’d worked on TV and, at that point, wrote on very contemporary shows,” says McNamara, speaking from his home in Australia where he’s under lockdown with his wife and kids. “It was only just that I wanted to write about Catherine that I wanted to write a period thing. It wasn’t something I was interested in. I didn’t really like period drama that much because it was very polite. When I found the character I thought, ‘How am I going to write about it so it’s something I would want to see?’ I wanted it to be funny and I wanted it to have its own tone. I just wanted the language not to be polite. Essentially, I wanted to be sure I would like it, so that’s how I wrote it.”

Originally, McNamara considered adapting the play into a film and wrote a screenplay version of the story, which begins as Catherine arrives in Russia to marry the emperor Peter. It was that screenplay that came to Lanthimos when he was looking for help reworking the script for The Favourite, which had been first imagined by Deborah Davis. Lanthimos wanted more levity in the story and was looking for contemporary language to offset the stuffiness of the usual period drama.

“I just extricated us from the history and took it to their basic human needs and desires,” McNamara notes of his experience collaborating with Lanthimos. “That is what they had in those times when they were in that experience. That was what we were trying to get across. So it didn’t matter if we were getting everything else exactly right.”

In The Great, which McNamara wrote alongside a group of TV writers, there is a similar sense of disinterest in what actually happened. Most of the characters are fictional or amalgamations, and there’s no historical evidence that Peter, played with fiery enthusiasm by Nicholas Hoult, was abusive or crass. It’s more about looking at how a 21-year-old woman, embodied by Elle Fanning, managed to reform a nation she didn’t come from. For McNamara, the idea is not to get bogged down in fact when it doesn’t serve the story at hand.

“Even though I knew I wasn’t going to be a slave to the historical detail—quite the opposite—we knew a lot,” he says. “I knew there were a few things in her life I was strict about and then within we created our own world. I knew what her husband was really like and he wasn’t a very good antagonist so I changed him a bit to make him a better antagonist. As long as I felt like we were telling the essence of who she was and her story then the historical details [didn’t matter]. Go read a book or watch a documentary, you know? It’s not a history lesson, it’s a show. Which is what we used to say on The Favourite too.”

Still, the writers used historical research to flesh out the world. They kept a white board in the writer’s room with a list of bizarre facts and events that could make their way into episodes, like how people of the time used lemon rind as contraception. Many of the details are, as McNamara puts it, not polite, veering away from what we usually expect from a period piece. While it may seem jarring to see a members of a royal court in more casual attire or fornicating in hallways, not everything could have been proper all the time.

“We don’t even know everything they did,” McNamara says. “There’s this idea because history got written down that we know what happened. We really don’t. Now it would be a bit different because there’s media, but back then we relied on written records and paintings. But they looked a certain way in portraits because they went to get their portraits done looking a certain way. That doesn’t mean they looked that way every day. They’re just human beings. We were thinking about how you would be as a person in those experiences.”

Like The Favourite, The Great uses a combination of high-brow language and contemporary phrasing and words. The characters veer from using words like “approbation” to saying “fuck” six times in a sentence. It’s funny, extremely quick and purposefully rhythmic – and very similar to how the original play was written. In fact, McNamara lifted several scenes directly out of the play. It’s similar to how the millennial-friendly Dickinson approaches past events and McNamara isn’t surprised that viewers are gravitating towards less serious tellings of history.

“TV has changed so much and it’s allowed people to imagine different versions of storytelling and different versions of genre,” he says. “The interest in historic comedies is part of that. It’s like, ‘Oh there’s a new way to do this.’ Obviously people have always liked historical dramas, but I think this adds a new audience to it. And that audience gets something different from it. There’s something in the past that speaks to us now.”

While The Great doesn’t set out to have a specific agenda or to convey any sort of message, many of the episodes do resonate with today, even when its via satiric moments. Conversations about how to treat the people of a nation and what they’re entitled to feel deeply relevant, as does Peter’s assertion that the populace shouldn’t have free will and must be led. These ideas are far easier to digest—or to ignore—when they come in the form of something funny and entertaining.

“As a writer, you’re dealing with the whole world you’ve created,” McNamara says. “You’re making comments because you’re a contemporary person writing a world, so of course you imbue it with stuff of your own time subconsciously. There’s episodes in there that are super current, but it was just something in history that’s similar to what’s happening now.”

The screenwriter has come around to period stories, especially now that he’s being offered so many of them thanks to the success of The Favourite. He’s even written another historical narrative for Lanthimos.

“I now like it because the scale of them is different and it gives you a kind of creative freedom that straight contemporary comedy or drama doesn’t,” he notes. “This gave me a stylistic way to be a bit bigger and bolder.”

The Great premieres on Hulu May 15. 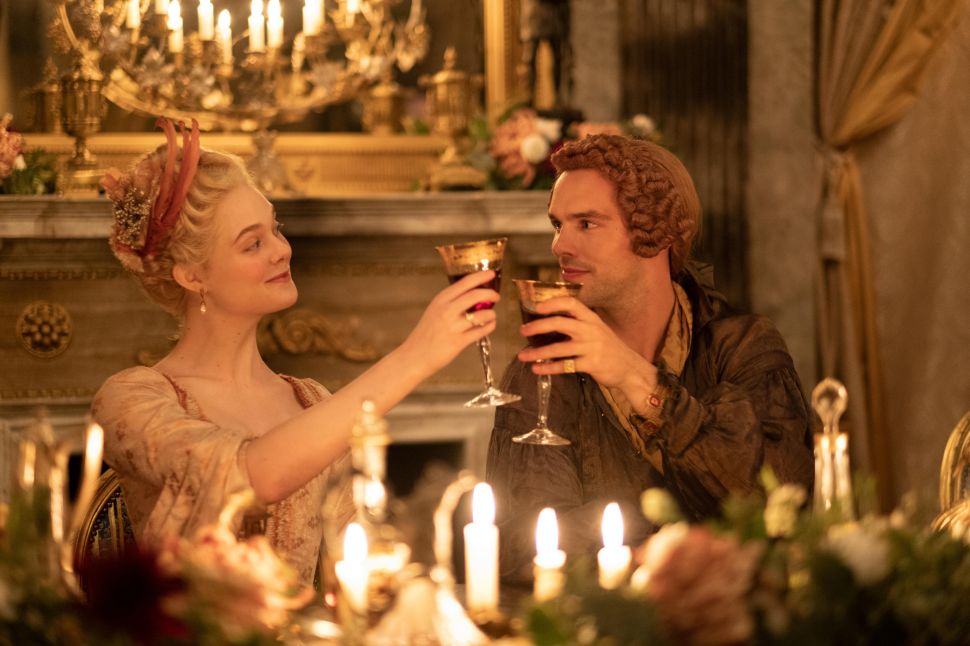