Anna Dorn is a writer and former criminal defense lawyer whose debut novel, Vagablonde, is about a criminal defense lawyer who wants to be a rapper. Prue Van Teesen is “Vagablonde,” a persona she more comfortably adopts in her Echo Park bedroom or Notes app than in actual music venues—until she meets a music producer who vibes with her raps about Foucault and imported cars. Dorn introduces readers to Prue as she’s checking out her ass in a Walgreens pharmacy mirror while picking up her Celexa, where we learn the important things: she’s a queer Virgo who is 30 years old and does not want keep picking up psychotropic medication at Walgreens.

In Vagablonde, people are either also 30 (squarely in the middle of the millennial generation and a real adult because you have experienced your saturn return), or 24 (immature because your saturn has not returned and aggravating because you are probably good-looking), or 54 (too old to understand or care about; either a parent or psychiatrist). People are their star sign, which Prue credits for her desire “to make sense of a random world by trying to put people into neat astrological boxes.” She thinks in “types,” a practice of categorizing individuals according to memed behavior: the type of person who asks for the manager, an egirl, a Chad. It’s fun to judge people like this, and Prue is lovable because Dorn doesn’t withhold how she actually feels about the “hyperbolic” and “post-sexual” L.A. characters she encounters. It feels wrong that we can’t scroll through her music idol’s Instagram alongside her, nitpicking and mentally noting what shade of blonde looks best.

It’s this very online discourse that pervades a thoughtful story about bodily impulse. Hard-partying, mid-tier beat producer Jax Jameson recruits Prue as the lead woman in a new music project they call Shiny AF. Soon after, Prue is off her meds and foregoing her rule of “I don’t take drugs, I’m offered them,” referring to the amphetamines and stimulants that swirl around the crew of musicians who, thank god, have all had their saturn return. She has no memory of recording it, but their first single gets a Pitchfork Best New Music write-up, thanks to the freckled cutie she’s flirting with behind her girlfriend’s back. As Vagablonde’s fame rises, Prue’s preexisting relationships, lawyerly duties and cat-owning responsibilities start to teeter, spiral and fall.

The subgenre where Vagablonde might be pigeonholed is LGBTQ fiction, and it’s not wrong to be there. But what Dorn most expertly captures is a reckoning with virality on an internet that queer culture helped shape. Unlike the always accustomed Gen Z and the never quite accustomed Gen X, Prue is hyper-aware of social media as a performed, mutable extension of the self. Time is measured by her growing follower count. She thinks about tweeting a Buffy reference but worries that her new fan base is too young to understand. Scenes of ethical tension play out on Tumblr (slightly less strange when we learn midway through the book that it’s 2017) or in a FADER article, projecting a version of reality that we know is not the truth, while what really happened is sealed off by a veneer of PBRs and pharmaceuticals.

Dorn describes the morning-afters with comparatively glaring clarity. When Shiny AF is called into a meeting with agents, Prue’s outfit choice (black tunic, velvet scrunchie) and Adderall dosage are detailed down to the milligram à la Tao Lin. Any discussion of an actual album or tour is obscured, to us and to Prue. She’s staring at her reflection in the glass and wiping her palms on her thighs. This is L.A., which might as well be the birthplace of style over substance. “I have no idea whether ‘Shiny AF’ is good or whether we’re just charming or hot or whether everyone is just fucked up out of their minds. Maybe I’m getting ahead of myself,” Prue reasons.

The only certitudes in Vagablonde are Prue’s feelings. Dorn resists heavy-handed narcissism in a “15 minutes of fame” narrative by showing her protagonist’s gut reactions to certain aesthetics: the credits of Call Me By Your Name, the sativa strain Maui Wowie, and the color blue. She’s romantic about the periwinkle sky that sparkles over Koreatown and felt safe her first night with Shiny AF because the teal bulb matched the one in her own room. Blue light in the daytime improves alertness, energy and mood; we now know that too much of it at night throws your circadian rhythm into whack. Vagablonde is a study of a woman who must determine the amount of light she wants in a city where it’s very, very bright. 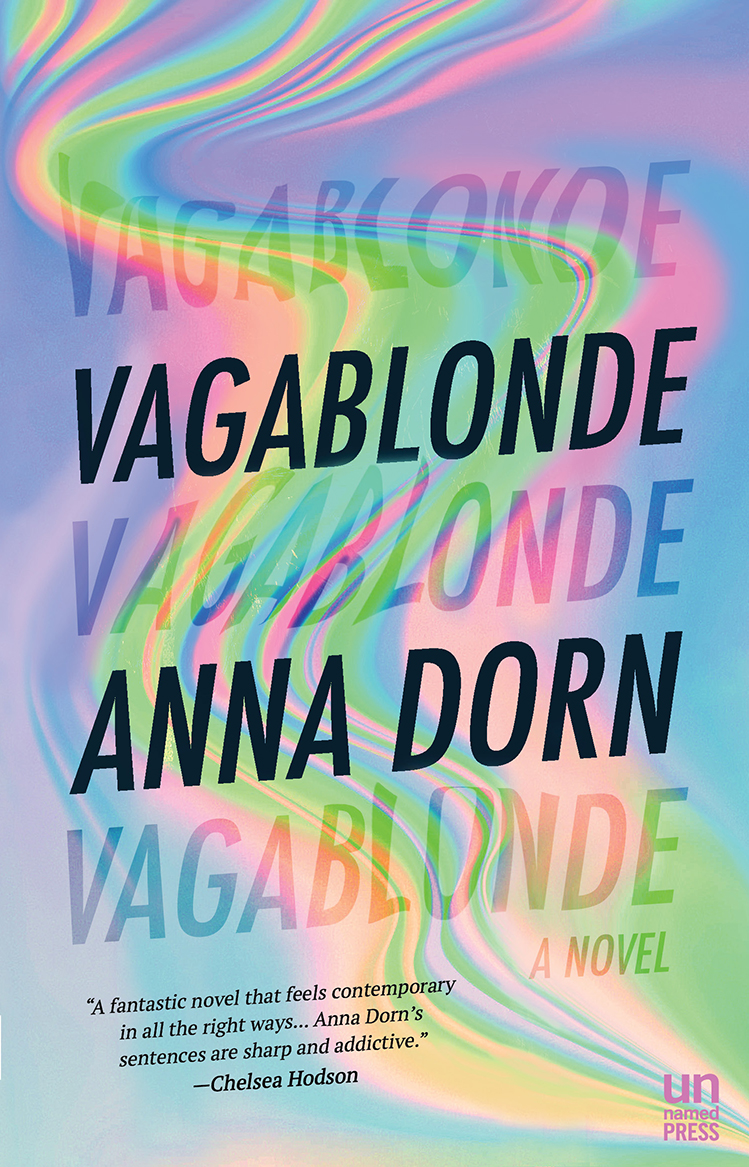