Amazon is enlisting artificial intelligence as a possible solution to repair its strained relationship with warehouse workers and save its faltering reputation amid the coronavirus pandemic.

The retail giant, which has faced worker protests, public criticism and even a lawsuit for its lack of protection for frontline employees during the pandemic, has introduced an AI-powered “Distance Assistant” that’s supposed to help enforce social distancing rules at Amazon’s bustling warehouses—and potentially other organizations.

“Given social distancing isn’t always natural, this team set out to use augmented reality to create a magic-mirror-like tool that helps associates see their physical distancing from others,” Amazon’s head of Robotics, Brad Porter, announced in a company blog post on Tuesday. He said the device has been tested at a handful of facilities and is ready to be rolled out to hundreds of more locations in the coming weeks.

Functioning in a similar way as radar speed signs on some public roads that tell drivers how fast they are going, Amazon’s social distancing system will show on a screen whether workers have come closer than six feet to one another. People remaining more than six feet apart are highlighted with green circles, while those who are closer together are highlighted with red circles.

The setup is relatively simple, consisting of just a big monitor, a camera and a local computing device. Amazon said the device is “self-contained” and can be quickly deployed to building entrances and other high-visibility areas. The company has also offered to open-source the technology, allowing other companies to build and deploy similar devices.

However, that means workers’ movement will be tracked throughout the day, whether they like it or not. Similar social distancing sensors built by other companies in the wake of the pandemic have drawn criticism from privacy experts and activists that such tools will help normalize increased surveillance in workplace.

“The biggest risk is mission creep, even if the initial implementation is health and safety in the workplace. It’s not a stretch to see this as a productivity-measurement tool,” Albert Gidari, director of privacy at the Stanford Center for Internet and Society, said of social distancing monitors in an interview with The Wall Street Journal last month.

The robot monitor is just one of many things Amazon has recently done in a bid to repair its reputation as a labor exploiter during the pandemic. Last week, the company even opened its warehouses to journalists, inviting them to see for themselves the various safety improvements Amazon had made. The New York Times came back with a photo-filled story showing plexiglass dividers, temperature check points, sanitation stations and even an in-house COVID-19 test lab. 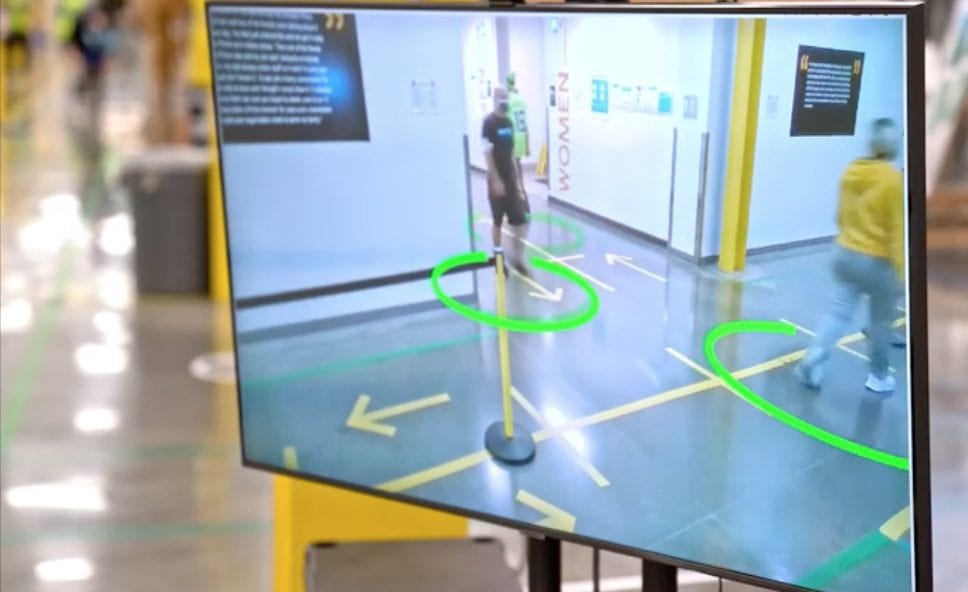