On Thursday, Italian authorities revealed that they’d recovered a painting that the elusive street artist Banksy had made on behalf of the victims of the 2015 terrorist attacks at the Bataclan music hall in Paris. The painting, which was stolen in France last year after originally being painted on one of the Bataclan’s emergency doors, depicts a mourner shrouded in delicate fabric.

According to prosecutors in L’Aquila, Italy, the painting was discovered on Wednesday during a thorough search of a home in the coastal town of Tortoreto. No arrests have been made as yet, so it’s unclear exactly who conspired to steal and conceal the painting. Major Christophe Cengig, a French embassy liaison officer, said at a press conference on Thursday that the owners of the Bataclan had been informed that the painting had been discovered. “It belongs to the Bataclan, it belongs to all of France in a sense,” Cengig said. “The owners…were thrilled, very happy.”

SEE ALSO: Banksy Is No Stranger to Using the American Flag as a Symbol Within His Work

ISIS had claimed responsibility for the terrorist attacks in Paris in 2015, which left over 130 people dead. According to authorities in Italy, it appears as though the theft of Banksy’s Bataclan artwork was financially motivated, and not an ideological statement upon the fate of the attack’s victims. Thefts or attempted thefts of Banksy’s politically-motivated paintings are a frequent occurrence. At the end of May, security guards apprehended a suspicious man who appeared to be preparing himself to steal the painting Banksy made to honor NHS workers from Southampton General Hospital in the U.K. 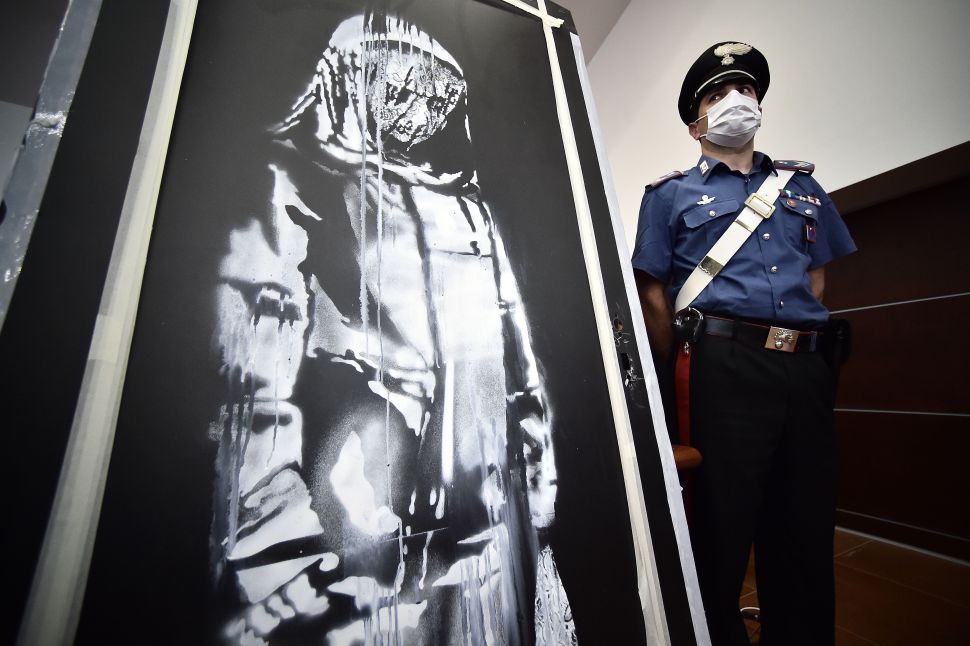