If there’s one artist who’s good at responding to virtually any incident in the world with lightning speed, it’s the elusive graffiti provocateur Banksy. When the coronavirus pandemic hit, the artist quickly produced work that spoke to the feeling of being trapped inside one’s own home and work that honored the medical professionals taking care of people on the front lines. Now, Banksy has reemerged yet again with a piece of art honoring the Black Lives Matter movement: a painting of of an American flag mounted over a picture frame and flowers and a small lit vigil candle, which is beginning to burn the very tip of the flag.

“At first I thought I should just shut up and listen to black people about this issue,” Banksy wrote on Instagram. “But why would I do that? It’s not their problem, it’s mine. People of color are being failed by the system. The white system. Like a broken pipe flooding the apartment of the people living downstairs. The faulty system is making their life a misery, but it’s not their job to fix it. They can’t, no one will let them in the apartment upstairs. This is a white problem. And if white people don’t fix it, someone will have to come upstairs and kick the door in.”

Other artists, like the American painter Jammie Holmes, have come up with their own anti-racism artistic statements in response to recent developments: Holmes memorably flew airplane banners over several American cities bearing George Floyd’s last words. But burning the American flag in this painting represents a unique leap for Banksy.

Banksy’s latest artwork doesn’t mark the first time he’s referenced the American flag in his output. A 2006 print by Banksy entitled Flags shows a group of young children standing defiantly on top of a destroyed car while raising the American flag, an image that perhaps implies American triumph over systemic adversity. In depicting the beginnings of a burning flag with his latest work, though, Banksy is clearly implying something very different with his work 14 years later. A lot has happened in those 14 years, including the deaths of far too many American citizens at the hands of the police. 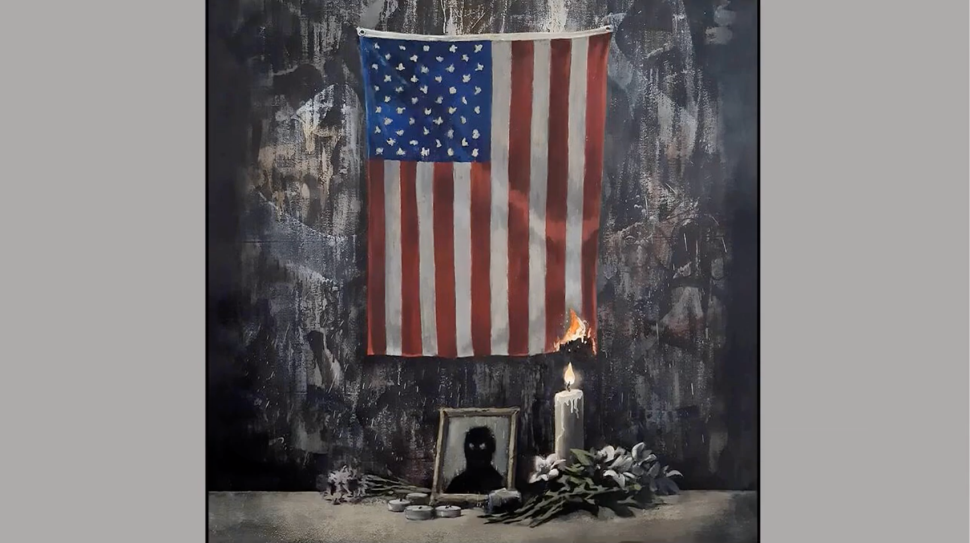