Earlier in June, a work of art that the mysterious artist Banksy had painted on the emergency door of the Bataclan concert hall, the venue that was targeted during the 2015 terrorist attacks in Paris, turned up unexpectedly in Tortoreto, Italy. While it was previously unclear who was responsible, the painting had been stolen from the venue in January of 2019. However, over this past weekend, reports emerged that six people in France have been arrested and charged for the theft. Four of these people have been accused of concealing the theft, while the other two have been put under stringent investigation for organized theft.

According to the Guardian, the alleged thieves pulled off the art heist by using an angle grinder to detach the artwork, which features a girl bowing her head in mourning, from the Bataclan’s steel security door. When the painting finally turned up in June, it was discovered by Italian authorities in a home in the coastal town of Tortoreto. At the time, Italian authorities speculated that the theft of Banksy’s Bataclan artwork was due to desire for financial gain, rather than a political comment on the 2015 terrorist attacks which ultimately killed 130 people. As of this week, it’s unclear what the thieves’ motives were.

However, it’s certainly true that Banksy’s work is frequently the target of theft and controversy. Back in May, security guards at Southampton General Hospital in the U.K. apprehended a suspicious man who appeared to be preparing himself to steal the painting Banksy made to honor NHS workers before he was able to actually do so. Plus, in September of 2019, a Banksy piece featuring a graffiti rat was stolen from its perch outside the Centre Pompidou in Paris. It’s still unclear whether Banksy orchestrated the theft himself in order to drum up intrigue around the work. 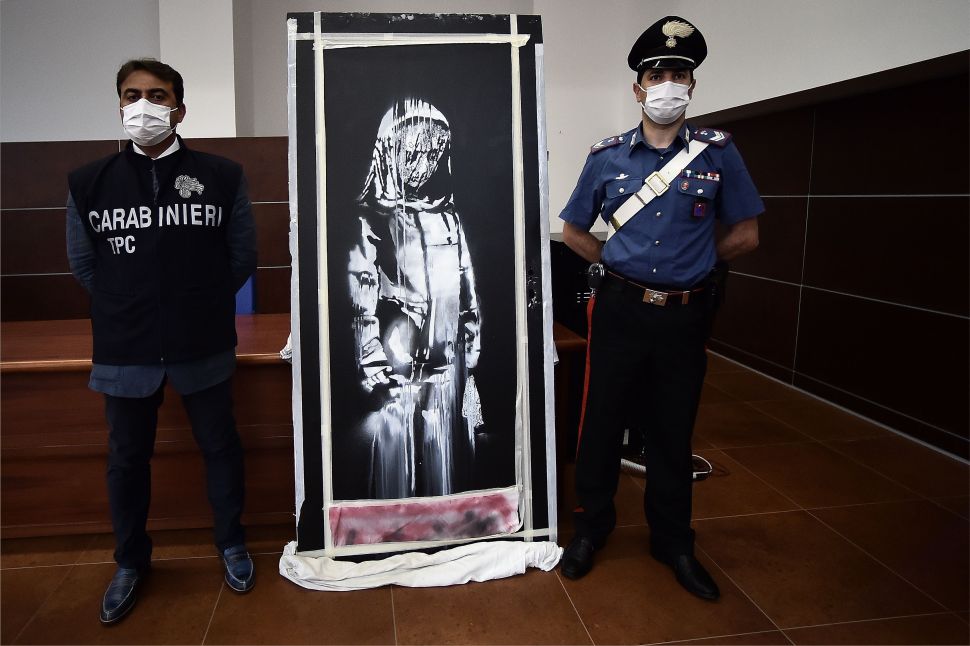