When your movie ends with one of the most shocking images in cinema history—a finale that completely challenges what audiences thought of the film that came before—what can you possibly do to top it? Turns out, all you need is a few greedy studio executives! After the huge success of 1968’s Planet of the Apes, which revealed that the “planet” of intelligent apes was in fact a future Earth, 20th Century Fox was eager to commission a sequel, which became one of the weirdest, bleakest, meanest, most ridiculous movies ever produced by a major studio. On the occasion of its recent 50th anniversary, let’s reveal our inmost selves and say a telepathic prayer to a nuclear bomb as we take a look back at the film that created the Apes franchise as we know it despite almost destroying it: Beneath the Planet of the Apes.

The first sequel of the franchise went through several rejected scripts that tried to follow the iconic Statue of Liberty shot from the first film, including one by Rod Sterling, who had originated that classic twist ending. French author Pierre Boulle, whose novel was the basis for the first movie, also wrote a script which followed humans rising up against the apes, resulting in the apes reverting back to their primitive origins and the antagonist Dr. Zaius becoming a circus ape. These ideas were scrapped, as producers didn’t think this was enough to top the visual shock of the original.

SEE ALSO: The 10 Best Movies on HBO Max That Bombed at the Box Office

In addition to the many script changes, and the loss of several directors, the film also had to deal with losing its star, Charlton Heston. In a move that seems strange today in this era of franchise continuity, Heston refused to star in a sequel only agreeing to a brief cameo at the beginning and then at the end of the film—as long as his character died. So for most of the movie we follow someone who looks like a caffeine-free version of Heston—coincidentally paving the way for the franchise changing protagonist with every film (except the last one). This extended to the story itself; the first 50 minutes of the film are basically the same story as the first Apes, with a new astronaut crashing on Earth and running into the apes before escaping in search of Taylor (Heston).

That being said, this first half isn’t without merit. For one, it is much darker in tone compared to the first film, a pessimism that would follow the rest of the franchise, and originated with screenwriter and poet Paul Dehn’s own fears of the atom bomb. The film begins with a dying astronaut realizing that they crash-landed on Earth thousands of years in the future and everyone he knew is dead. Right at the beginning, Beneath the Planet of the Apes stares into the void of existentialism.

When our new protagonist Brent (James Franciscus) reaches the city of apes, he witnesses a gorilla commander talk about the danger of allowing humans to exist, proclaiming that “the only good human is a dead human.” Later, soldiers break up a group of pacifist young chimps holding anti-war signs, with the hippie chimps being put into cages. The civil disobedience is a very on-the-nose allegory for the Vietnam War, but it works in the film, and it paved the way for each subsequent film to have a big allegory in the midst of its cheesy sci-fi shenanigans: Escape tackled animal experimentation and government intrusion, Conquest was the least subtle allegory for racial tensions and riots of the 1960s and Battle dealt with the inevitability of war.

Then we have the telepathic subterranean mutants.

Paul Dehn’s biggest contribution to the film’s script (which he wrote with producer Mort Abrahams) was the idea that Brent and his human companion Nova (Linda Harrison) would find a group of humans living in the ruins of New York City who had mutated and developed the power of mind control, which they only used to create very loud noises and hallucinations of statues crying blood. It’s silly, it’s ridiculous and it doesn’t get any more on the nose than seeing a church service of humans singing hymns to a giant nuclear bomb. At the same time, is it really more ridiculous than apes fixing a spaceship and traveling back in time in Escape, or a dystopian world where apes replaced cats and dogs as pets in Conquest?

The first order of business for Beneath the Planet of the Apes was to top the reveal of the Statue of Liberty in the first film, and the moment the telepathic humans take off their masks and revealing their horrible mutated skin-less faces, the film sets on a path that ends with literally blowing the original’s twist ending, as well as the entire planet, out of the . While in production for the film, Richard D. Zanuck was fired as head of Fox by his father, and he got an idea that would serve as a big “F You” to his father, while guaranteeing that the franchise died with his departure: take a suggestion by Charton Heston that Taylor die by activating the doomsday nuclear bomb and take the entire world with him.

And so the final eight minutes of the film show Nova getting shot, the human mutants either killed or killing themselves, the ape general Ursus shot in the back, Brent killed by firing squad and Taylor activating the missile with his dying breath.

As the screen fades to white, a narrator puts an end to any hopes of the characters surviving by saying: “In one of the countless billions of galaxies in the universe lies a medium-sized star. And one of its satellites, a green and insignificant planet, is now dead.” The film effectively proves Dr. Zaius right. Humans are indeed evil and capable of nothing but destruction, and this sort of cynicism and bleakness would follow the rest of the Planet of the Apes films.

After Beneath the Planet of the Apes, every film in the series started siding with the apes, showing them as sympathetic characters in a cruel world. The stories share a dark and cynical tone that lets the audience know that no matter what, everything was doomed to result in the Earth blowing up. Beneath the Planet of the Apes is a silly movie, but it’s combination of cheesy sci-fi and fantasy with such bitterness and hopelessness made this one of the most unique and special franchises in Hollywood history. It all began with bomb-worshipping mutants blowing up a planet of apes.

Beneath the Planet of the Apes is available to rent on iTunes, YouTube, Vudu, Amazon and Google Play. 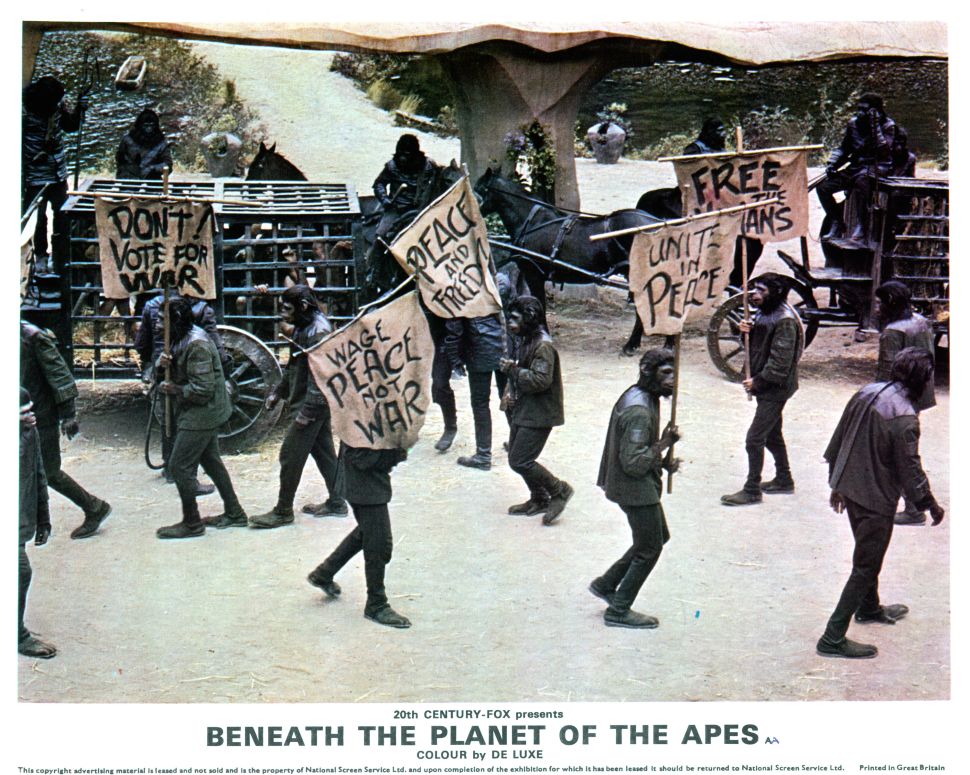