Existential dread, overpopulation, and global warming: Duncan Macmillan’s new play might not seem like a light night at the theatre. Nonetheless, he asserts one thing: “I promise it’s funny.”

Following its sold-out run at the Old Vic in London, Macmillan’s new play, Lungs, was to make its stateside debut at BAM this spring, bringing with it two of England’s biggest stars of screen and stage, Claire Foy and Matt Smith. When COVID-19 hit, the two-hander, which tracks a couple’s process of deciding whether or not to have a child in the age of climate change, was put on indefinite hold. Now, the Old Vic has announced the play will return home—physically, and virtually. Each night, from June 28 to July 4, a maximum of 1,000 ticket buyers will watch a livestreamed performance of the show, with sales benefiting the London theater, which has been in great need since the pandemic struck.

Performing for online viewers, Foy and Smith will again share the stage but this time working with six feet of distance between them, bringing topicality to an already topical show.

“I was struck by a question that the characters kept coming back to—‘Are we good people?’—and the inadequacy of the evidence they present for their defense,” Macmillan told Observer, speaking before coronavirus had shut down half the world, but with words that certainly resonate now (this piece was originally planned to run prior to the New York debut of Lungs at BAM, before the show’s cancellation). “On the surface, the play is a comedy about a couple deciding whether or not to become parents,” Macmillan said. “But it’s also a satire about western, liberal hypocrisy and a sincere articulation of my anxiety about our world, an anxiety that I think more share now than in 2008.”

As our world pauses and COVID-19 illuminates just how much of an impact humans have on the environment, the play gains new urgency, asking how one can responsibly exist on a planet whose resources have been stripped and whose fuel-dependent advancements make it difficult to diminish our carbon footprint. But on a broader level, the play navigates universal themes of the complexity of relationships and the choices we make to satisfy our partners—and ourselves. Who better to embody such a pair than the actors who brought an iconic couple to small screens around the world.

Foy and Smith, the stars of The Crown whose crackling energy is in many ways responsible for that Netflix show’s success, portray unnamed, everyperson characters struggling with their (and their planet’s) future. Refined as they were on The Crown, here they play contemporary characters trading in the monarchy’s constraints for a doomed world’s limitations.

“Matt and Claire are extraordinary,” Macmillan said. “Lungs is a high-wire act—it’s just the two performers for the entire duration, no scene changes to recover during, no scenery or props or costume changes. The characters talk at a hundred miles an hour and go through the gamut of emotions. I wrote the play as both a gift and a challenge for actors and it needs a degree of virtuosity, which these two absolutely have.”

World-renowned celebrities though they are, Foy and Smith are neither actors who rest on their laurels nor ones that phone it in each night. “They’re very experienced theatre actors and they worked so hard, even before rehearsals began, and would often continue to run lines after rehearsals ended,” the playwright added. “They would check in with each other before and after every performance and analyze what could have gone better and what new discoveries they wanted to keep from that particular performance.”

There’s another important shade that colors the piece: “They’re both so funny,” Macmillan said. “Every moment, each gesture or movement has been choreographed with precision. It’s been a real joy to be in the rehearsal room with this company and to see them share it with an audience.”

Since the Greeks, plays have long reflected the social concerns of our time, and so it feels apropos that more climate change plays are popping up and granting audiences access to varying perspectives on this crucial topic, be they fantastical (as with Madeleine George’s Hurricane Diane last year at New York Theatre Workshop), metaphorical (Lucy Kirkwood’s Tony-nominated The Children on Broadway), or even data-driven (like MacMillan’s previous work 2071, a dramatized lecture of the British scientist Chris Rapley’s climate research). Each work, undeniably, becomes more pressing than the last. 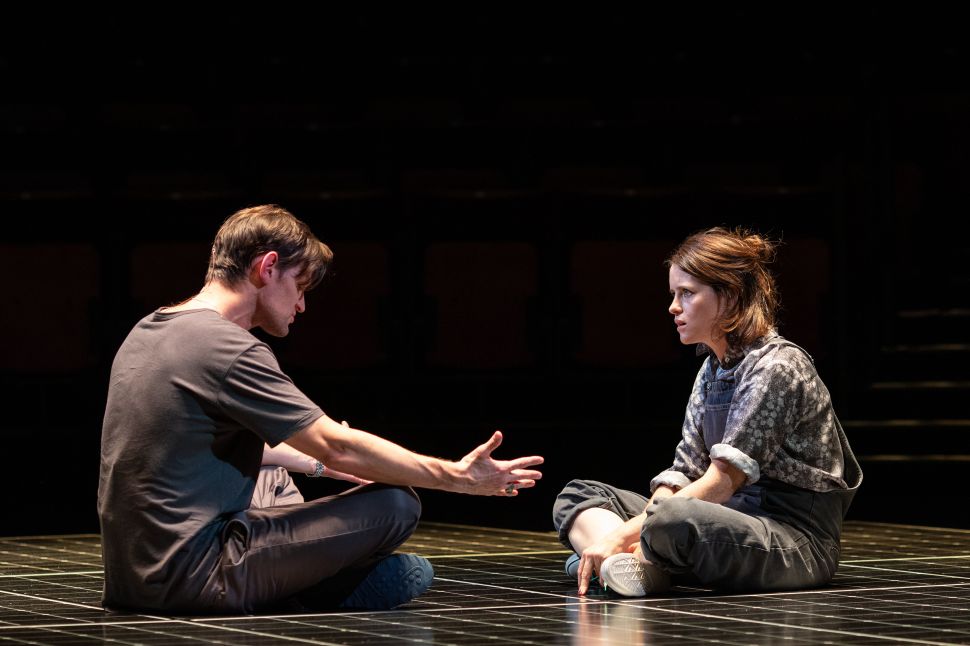