Once again, he fuses genres, this time mixing the Vietnam war film with a corruption-of-greed gold-heist movie. And once again, Lee and his co-writer and fellow Oscar winner Kevin Willmott have taken an existing script—this one by Danny Bilson and Paul DeMeo—and reframed it as an exploration and exposé on the many ways American society historically and currently exploits and ignores Black lives—in particular, the labor and bodies of Black men.

What results is a messy, ambitious, deeply emotional film that sometimes falls victim to the tropes of the genres it attempts to remix but never loses its power to move us. Rather than feeling like a polemic, Da Five Bloods is uplifted by Lee’s passion for excavating the 400-plus year history of Black people in the United States. Moreover, a seemingly prescient Lee has harnessed the urgent fury that has gripped the nation since May 25. That was when a Minneapolis police officer killed George Floyd by kneeling on his neck while the handcuffed 46-year-old father of five pleaded for his life, and three other officers did nothing.

SEE ALSO: Which Streaming Service Is the Best Bang for Your Buck in 2020?

But what Da Five Bloods may be most remembered for—and what makes it feel like a gift to film lovers of every political persuasion—is for turning the spotlight on to a quartet of older African American actors who rarely if ever get to play featured characters in movies.

This is especially true of the film’s star, the extraordinary Delroy Lindo, who, since making his mark as one of the most formidable film actors of the 1990s, has primarily been on the margins of movies during this century. Here the star of CBS All Access’s The Good Fight expresses physically and with the contours of his remarkable face the unprocessed trauma that has long been an unspoken aspect of the African American experience. It manifests itself in his character’s ever-changing melange of anger, nativism and distrust. (Like many of those who will likely find fault in the film, Lindo’s character is a Trump supporter, and wears his red MAGA hat with pride.)

Da Bloods were a group of friends who served several tours together in Vietnam in and around 1968. They include Otis and Melvin (Clarke Peters and Isiah Whitlock Jr respectively, both from HBO’s The Wire,) as well as the seemingly successful Eddie (Broadway and opera actor Norm Lewis), and Paul (Lindo), who still wears outwardly the psychological scars he carries from his experiences in Vietnam. The group was fronted by Stormin’ Norman (Chadwick Boseman), who died in battle. Norman served not only as their unit commander but also as their spiritual and political leader, helping them reconcile their identities as Black men living in a country that is hostile and indifferent to them with their love of country.

The men reunite in Vietnam (a short dance scene in a Saigon disco is one of the film’s most lasting moments of joyous expression) seemingly to recover Norman’s remains. But that’s more or less a front. Their actual mission is to locate and launder a stash of gold the five had buried over 50 years earlier, a payout they see as reparations for their mistreatment while in the army and at home.

Their plan is complicated by the unexpected arrival of David (The Last Black Man in San Francisco‘s John Majors), Paul’s estranged son, as well as the involvement of a shady French businessman Desroche (The Professional‘s Jean Reno). (Sporting a linen suit in colonial white, Reno’s character looks like he spends his free time robbing orphanages.)

You don’t need to have watched The Treasure of the Sierra Madre to know the madness gold can reap upon the minds of men. But exposing avarice is not really Lee’s interest here. His mission is to give a full and necessary airing of the painful contradictions ingrained in Black and American identities.

Lee uses many tools to achieve this, from photographs and historical context (there are moments where the movie feels like a polished PowerPoint presentation) to shifting aspect ratios and camera filters as the story shifts in time. (Unlike Da 5 Bloods’ cousin in sweeping Netflix epics, Martin Scorsese’s The Irishman, Lee makes little attempt to de-age his older actors.)

He can engage in this process of painful reckoning through the cacophony of firefights and land mines, but also with quietude. One early example of this is when Peters’ Otis slowly realizes he has a daughter from his time in Vietnam, and the actor expresses a lifetime of regret just with his eyes.

Like several of Lee’s films, the strongest technical element may be the music. This includes both Terrence Blanchard’s luminous original score as well as the isolated-from-backing-tracks singing of Marvin Gaye. The late Motown star serves as the story’s conscience every bit as much as Boseman’s Norman does.

Like his other Homeric chronicles, 1992’s Malcolm X and 2018’s BlackKklansman, the coda is a call to arms that seems to fall outside the narrative of the film. Coming as it does after weeks of marching and months of witnessing the inequality laid bare by the coronavirus, it comes off as a declaration of shared purpose and a desperately needed moment of national catharsis. 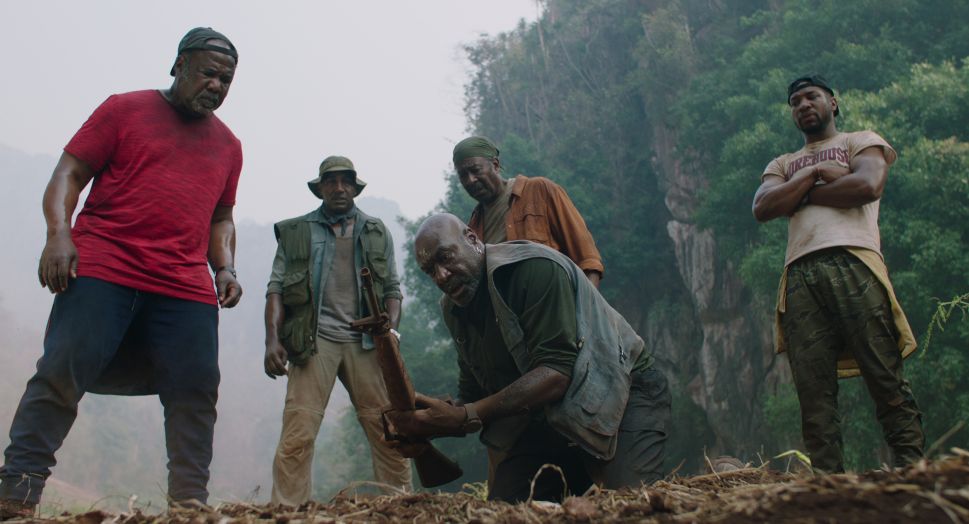