We might know Danny Trejo as the quintessential badass, playing the villain in Quentin Tarantino films Desperado and From Dusk Till Dawn. But in his latest role in Short History of the Long Road, which was released June 12, Trejo shows a softer side.

He plays Miguel, a mechanic who takes in Nola (Sabrina Carpenter), after the teen loses her dad on a road trip, giving her a roof over her head and a job at the body shop.

It’s not too far off from the good guy Trejo is offscreen. The new documentary Inmate #1: The Rise of Danny Trejo, which gets a digital release July 7, traces his life as an ex-con to Hollywood star, having appeared in over 300 films, becoming a taco restaurateur and cookbook author, having recently released Trejo’s Tacos, which shares 75 family recipes handed down from his grandmother.

SEE ALSO: How Atkins Estimond of ‘Hightown’ Sees BLM and ‘Defund the Police’

Trejo grew up in the tough Pacoima neighborhood of Los Angeles, was a heroin addict as a teenager and was jailed several times before becoming a boxer, getting clean, then becoming a film extra, playing nameless characters in scripts, like “Inmate #1” or “Gangbanger #1,” which eventually led him to legendary roles in Tarantino films and Robert Rodriguez’s Mexploitation film, Machete.

More recently, Trejo has been delivering free meals to low-income families and frontline workers amid the pandemic. He spoke from his home in L.A. about prison reform, his Salma Hayek tattoo and being a Pampers delivery boy.

Observer: You’re used to playing the tough guy, but in Short History of the Long Road, you’re the good guy.
Danny Trejo: I kind of like playing a different role. I didn’t kill anyone, and I didn’t get killed.

It kind of shows your soft side?
[Laughs] What soft side?

Is it easy to show your soft side onscreen?
It wasn’t hard, the staff on set were so accommodating. Sabrina Carpenter was a sweetheart to work with, simple and easy. I love the director Ani Simon-Kennedy, it was easy to do. I’m not really a bad guy!

Of course not! What was your first impression on set?
When I read the script, I thought Oh, I’m not killing anyone or getting killed. When I looked at the cast, the director was a woman, the cinematographer was a woman and most of the staff were. I thought, This is going to be different. It was pleasant. A lot of times, movies are clusters of people running around, yelling. This one was a well-oiled machine. When I did that film, I was in the process of building a 1949 Chevy pickup truck. I wanted to tell the director: “Let me bring my truck in here so I can work on it! Please!”

In the new documentary about you, Inmate #1: The Rise of Danny Trejo, you say: “Everything good happened to me is direct result of helping someone else.” How did you figure that out?
When I got out of prison in 1969, I broke into every house in my mom’s neighborhood. I stole things, robbed everyone, I remember looking at an old woman dragging her trash cans out, they didn’t have wheels back then. I offered to help her on garbage day. Then, I started taking old people’s trash out. The first present I got was a double-breasted suede blazer, I’ll never forget that. Everything good is a direct result of helping someone else, it’s just karma.

Where did your life go from there?
I was a drug counselor, then got into the movie business. Then I got into the restaurant business while doing a low-budget movie that I was apprehensive about. I had another movie that paid more, but I did Badass, then met a producer named Ash R. Shah, who knew the restaurant business. He said: “Danny, you should open a restaurant.” Jokingly, I said: “Trejo’s Tacos.” Six months later, he brought me a business plan, and I brought it to my agent, and now, I’ve got seven restaurants.

If you look at the Department of Corrections in California, and spell it backwards, it says recidivism.

Do you remember the moment you turned your life around?
It was Cinco De Mayo, May 5, in 1968. I was involved in a prison riot. Me and a few others went to the gas chamber. I remember thinking: “God, if you let me die with dignity, I’ll say your name every day for the rest of the time I am here. I’ll do whatever I can for anyone I come in contact with.” I thought it was just going to be a couple of years but, he fooled me and gave me the rest of my life. I’ve been living up to my end of the bargain, so has he. A few days ago, I asked: “God, how am I doing?” He said: “You’re almost out of hell, keep it up.”

Why is it important for you to hire at-risk youth at your restaurants?
It’s automatic for me. I’ve had second, third, fourth chances. I just helped my cousin Gilbert, who just got out of prison. He was sentenced when he was 17. He got when he was 55. Governor Jerry Brown helped pass Proposition 57, allowing juveniles to get parole for early release. We have had 5,000 people come out of prison who were doing life when they did a crime in their teens or 20s. When you’re 35 or 40, you’re a different person.

Do you think the prison system can be improved in America?
If you look at the Department of Corrections in California, and spell it backwards, it says recidivism. It doesn’t work. The corrections department has 85% recidivism, so we’re doing something wrong. I think we need more self-help programs in there, more psychologists. They have to. Otherwise it’s just a warehouse of insanity.

Hopefully now we will see the change?
I hope so, I think some change will come about. I think they’re going to have to be more stringent, getting into the police department, the prison guards. They have to.

You also recently released a cookbook, Trejo’s Tacos. The recipes are from your mom and grandma?
In Mexican cooking, recipes are handed over generations. We took out the stuff that wasn’t healthy but kept the taste. I’m in love with my food. I eat at every restaurant every week, and I eat for free, so that’s cool.

You’ve said that you can do anything with a taco, except put ketchup on it?
That’s it! [Laughs].

Do people try to do that?
Yeah, some people think that ketchup is good on a taco. Maybe if you’re 10-years-old, you might want to put ketchup on a taco.

But that’s sacrilegious!
I know, right?

What is your favorite taco right now?
I have a carnitas taco with cauliflower, which Anthony Bourdain loved. He wouldn’t eat at just any place in L.A. At my place, you can eat vegetarian, vegan, gluten free and bite into a cow, if you want. The variety came about because of the entertainment industry, we’d all go out to dinner and two people would say, “I’ll have a salad,” so I included them. Now, we offer all of that.

And you’ve been donating food around L.A. during the pandemic to frontline workers and low-income families?
It was happy to bring joy into people’s lives, to give them a break. When we were passing out food, the women asked us, “Do you have Pampers?” because the stores sold out of diapers. We went out and bought 150 boxes of Pampers, because kids go through 8 diapers a day, so we gave the mothers diapers. My assistant turned to me and said: “You went from San Quentin prison and now Pampers.” I said: “I know.”

What was your nickname in jail?
I was a lightweight boxer, so they just called me “Sir.” I got two of my tattoos in prison, too. One being my chest tattoo, a Mexican lady with a sombrero. When I first met Salma Hayek, I told her it looked like her, so I said: “Look, I tattooed you on my chest. We were meant to be together, Salma.”

After appearing in 300 films, opening seven restaurants and writing a cookbook, what would you say the secret to your success?
When it comes to restaurants, everyone calls me and asks me what’s my secret. Restaurants usually die in the first year. We’ve done seven in four years. We even have one in the airport. I say the secret is good food, good staff. That’s all. You can have a taco truck. If it’s good, people will come back. When I interview my staff, if they just want to work, cool, come on. The second chancers, they’re so happy to just be working. Staff and good food. I taste everything. 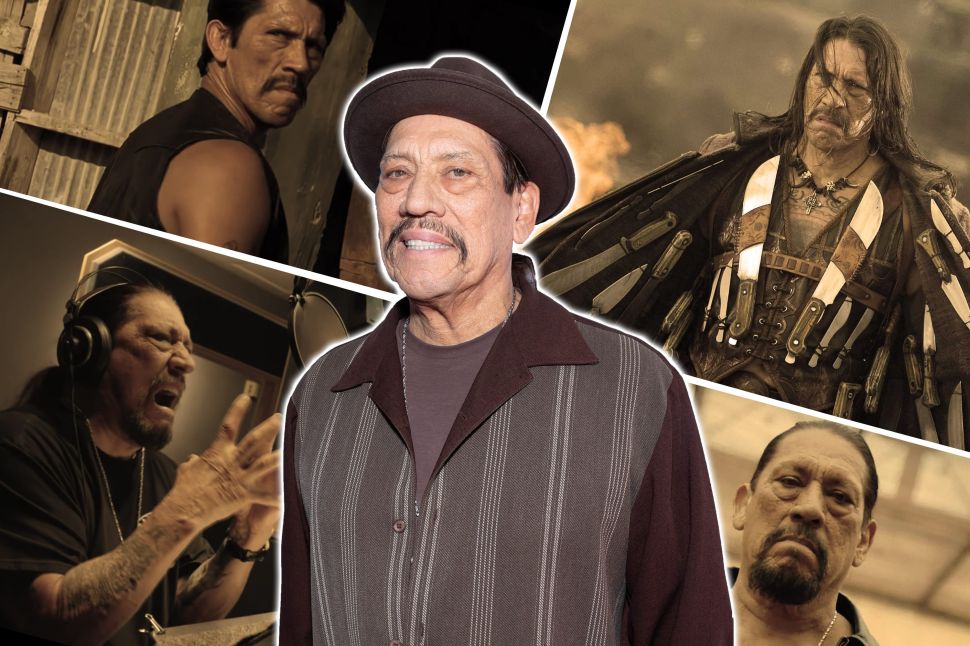