The coronavirus pandemic has radically changed the way we live; it is also upending the way we vote. Traditional polling stations, which often have long lines and use crowded indoor spaces and shared voting equipment, pose substantial risks for spreading the disease. Unless there is a massive switch to remote voting, the predicted second wave of COVID-19 this fall could be catastrophically escalated by large in-person turnouts at polling stations. And in turn, efforts to prevent increased infections can be used as an excuse for targeted, discriminatory curtailment of in-person voting, with the outrageous events in Georgia’s primary election on Tuesday a clear example of the potential derailment of democracy.

Currently, the most common way to vote remotely is by mail. It’s a proven, convenient, and safe technique; in the 2016 election,  1 in 4 Americans voted by mail. However, President Donald Trump (who himself votes by mail) and his allies have falsely attacked vote-by-mail as wide-open to fraud and an attempt by Democrats to steal the election. The Republican National Committee has launched a lawsuit in California contesting expansion of vote-by-mail and in states controlled by Republicans obstacles to voting by mail will likely be greater than those faced by voters in other states.

So, if in-person voting in November remains dangerous because of the pandemic, and accessing vote-by-mail could pose a challenge depending on where you live, is there any other way to vote remotely? The pandemic has accelerated the ongoing shift towards online shopping, working, and socializing. Shouldn’t we be able to vote online as well?

It’s an idea that comes with risks and caveats, but also has some forward-looking supporters and growing traction.

Former presidential candidate Andrew Yang who galvanized a passionate group of supporters with unconventional positions on issues like universal basic income, promoted online voting as a campaign issue. Wealthy venture capitalist Bradley Tusk, known for his early involvement with Uber, has been an activist for expanding voters’ access to online voting through his foundation Tusk Philanthropies and their program the Mobile Voting Project. Their website argues that low voter turnout is the reason why American politics are so polarized and that the best way to significantly boost turnout is by allowing citizens to vote via an app on their mobile phone.

In light of the pandemic, West Virginia and Delaware have already moved ahead with some form of online voting. West Virginia limits online voting to overseas military personnel, overseas residents, and people with disabilities. Delaware has gone so far as to allow voters who are under quarantine or who fear infection from COVID-19, a broad category that could include most residents in the state, to vote online.

But there are many, many risks. A new study by researchers with the Massachusetts Institute of Technology (MIT) and the University of Michigan warns that the well-known online voting platform OmniBallot, which is used by both states as well as elsewhere, has security vulnerabilities and that online ballots returned electronically could be easily hacked.

OmniBallot can also be used for home ballot production and ballot marking; the study expressed support for these functions but recommended security enhancements and also expressed concerns about data collection by OmniBallot. In response, Democracy Live, the software manufacturer of OmniBallot, said that its system is more secure than other online forms of ballot return like email and also said they are planning to make public their privacy policy around data collection.

Online voting is not an untried or new idea; according to the voting rights group, Common Cause at least 100,000 citizens voted online in 2016 and pressure for expanded remote voting options due to the coronavirus pandemic point toward an even larger online vote count for the 2020 election. The majority of online voters are active military members combined with smaller numbers of overseas residents and disabled voters. 32 states and the District of Columbia allow some form of internet voting but only for very specific and small populations. However, given the pandemic, why isn’t online voting being more widely adopted or at least discussed more broadly? The answer in a word is cybersecurity.

“It’s not feasible under any current technology to adequately secure an online public election,” said Dr. David Jefferson, a computer scientist at the Lawrence Livermore National Laboratory. “There are fundamental cybersecurity problems for which we don’t even have potential solutions.”

Indeed, in May The National Institute for Standards and Technology, released a detailed statement in conjunction with four federal agencies, including the Department of Homeland Security’s Cybersecurity and Infrastructure Security Agency, that starkly warned states against using online voting and laid out specific guidelines and best practices for voting-related online practices such as voter registration.

“While there are effective risk management controls to enable electronic ballot delivery and marking,” said the statement, “we recommend paper ballot return as electronic ballot return technologies are high-risk even with controls in place.” In other words, even when best practices are implemented when it comes to returning a completed ballot electronically, they don’t fully address the wide range of security challenges. So exactly why is voting online or with an app so insecure and vulnerable to hacks and manipulation?

A chain is only as strong as its weakest link, and there are a lot of connected links in online voting and therefore many avenues for mischief or error. The ever-accelerating spread of malware affects laptops and smartphones alike and cybersecurity experts worry that worms or viruses could infect or corrupt individual votes or the electoral systems that transfer, collect, and count them, and do so on a scale large enough to change the outcome of elections. Other forms of cyber-attacks, such as denial-of-service attacks, in which a server is flooded with bogus internet traffic until it crashes, could also wreak havoc on election systems and block votes or cause them to be critically delayed.

The main reason, however, that online voting is more vulnerable to cyberattack and manipulation than banking or other online transactions is that voting in America is done by secret ballot. The use of the secret ballot (or Australian ballot) dates back to the turn of the 20th century and was introduced as a crucial voting reform to combat electoral corruption and fraud such as vote-buying and selling and voter intimidation. Further, voting had often been a physically dangerous and potentially intimidating activity to engage in. Elections were punctuated by widespread violence and rioting; during the middle of the 19th century, 89 citizens were killed as a result of Election Day riots.

These days the demand for a secret ballot creates a gordian knot for election officials who might otherwise see efficiency advantages and cost-savings in a broad switch to online voting. However, there is simply no proven way to both keep an online ballot secret and guarantee its authenticity.

“You have a huge authentication problem in the beginning to verify that the voter is who they actually say they are,” said Susan Dzieduszycka-Suinat, President and CEO of U.S. Vote Foundation. “Then you have to separate the actual ballot from the identity of the voter to create an anonymous transaction. Once you’ve done that, how do you verify that any vote belongs to any voter and how does the voter check their work later? That decoupling throws a technical wrench in the works and creates a challenge that people haven’t been able to conquer.”

The solution then for 28 of the 32 states that use some form of online voting is to have voters waive their right to a secret ballot, therefore enabling officials to identify the voter and accurately trace and verify the vote. However, waiving one’s right to a secret ballot raises red flags for voting rights advocates who see the voluntary surrender of such rights as creating an alarming precedent and potentially setting the stage for a reversion back to the rampant political corruption that was commonplace before the secret ballot.

“The reason we went to a secret ballot in this country over 100 years ago was because there were all kinds of nefarious voter coercion,” said Susan Greenhalgh, the Senior Advisor on Election Security at Free Speech For People. “We’re not immune to that problem. If we create a system that facilitates or enables voter coercion or vote-buying or selling, it’s probably just a matter of time before it becomes a significant problem.”

Further, voting rights advocates stress that foreign interference in the 2020 election is already underway. Increased online voting would elevate legitimacy issues around the election and make it virtually impossible to perform accurate audits on races that are close or contested. Voting by mail remains the gold standard for remote voting and, barring an unforeseen technological breakthrough, will maintain that position for foreseeable future.

“Voting by mail is demonstrably proven as the safest and most secure method of casting a ballot,” said Susan Dzieduszycka-Suinat. “The current attacks on voting by mail are unfounded and it is a shame that voters are having to wade through the confusion. Every voter should have the right to choose to vote safely by mail.” 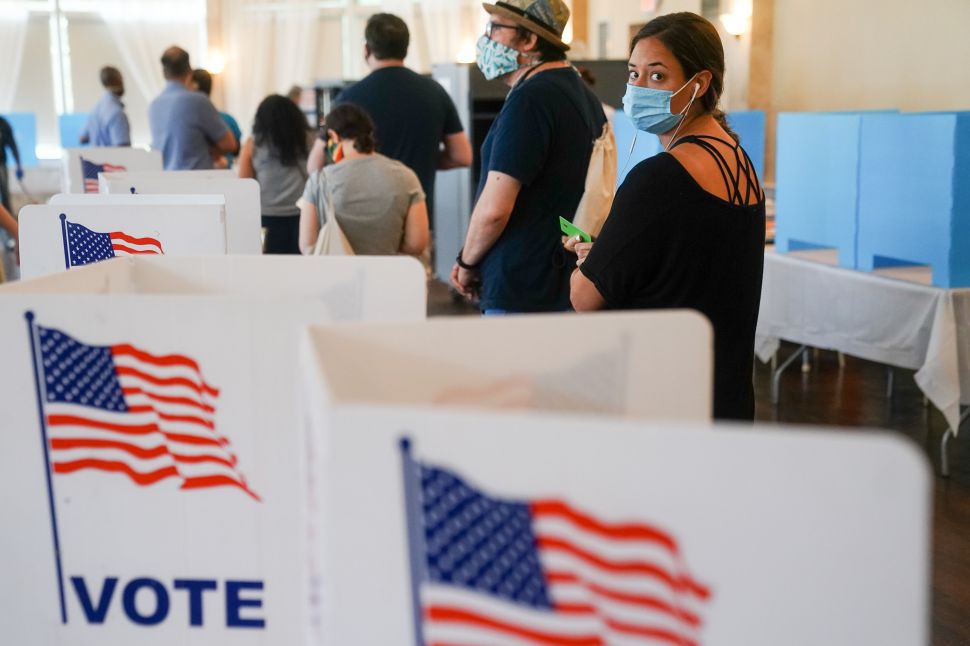