As protests against the deaths of Black Americans at the hands of law enforcement have continued to unfold daily, members of the establishment have been quick to condemn the acts of demonstrators. As huge crowds of protesters have swept through major cities, incredible amounts of graffiti writing have been added to statues, sidewalks, and public park perimeter walls serving as accidental backdrops for Trump photo-ops. To some people, graffiti is destruction; evidence of criminality that goes hand-in-hand with looting and property damage. But in truth, graffiti is an artful form of communication that’s been an important part of the grand tradition of American dissent.

On Wednesday morning, municipal workers in Philadelphia took down a statue of 1970s mayor Frank Rizzo. Rizzo was a brutal police commissioner before he became the mayor, and was known for violently humiliating members of the Black Panthers during an arrest and for telling citizens to “vote white.” There had been years of discussions in the city about removing the statue, but the catalyst was the extent to which it was covered in paint, graffiti and rope by demonstrators over the weekend. Similarly, confederate monuments in Alabama and Virginia have recently been dismantled because of graffiti: in Virginia, the United Daughters of the Confederacy took down a statue of a soldier called “Appomattox” because they feared it would be vandalized in protests. In Alabama, protesters defaced and tore down a statue of confederate captain Charles Linn themselves.

Birmingham where confederate monument was just taken down pic.twitter.com/nXXiNZ3rfr

The act of writing on a wall or on private property goes back centuries. However, there’s something uniquely American about the extent to which graffiti has been historically condemned as petty hooliganism when really, it’s a potent political tool that can lead to tangible change. More recently, graffiti art (supposedly distinguished from plain ole graffiti because some self-appointed arbitrator of taste has deemed it aesthetically worthy) has been lionized in high-end gallery contexts because certain practitioners have captured enough attention (looking at you, KAWS). But using spray paint as a form of expression is being decried again by critics of looting in order to suit a conservative narrative: that spray paint constitutes destruction, and that property damage is more egregious than violence against human beings.

The inescapable graffiti phenomenon of New York City in the 1970s (certainly a progenitor of the “graffiti art” trend) came about in part because infrastructural corruption and lack of social programming left young people disaffected and without creative outlets. It could be argued that similar conditions have given rise to the nationwide explosion of graffiti currently unfolding. Over 40 million Americans are unemployed, citizens are still dying at the hands of police and the poor and people of color remain drastically under-protected by state and local governments. So can we take a moment to remember, before tut-tutting at a scrawled message on a wall, that spray paint communicates; and that it can ultimately be washed away, but human lives can’t be revived once lost. 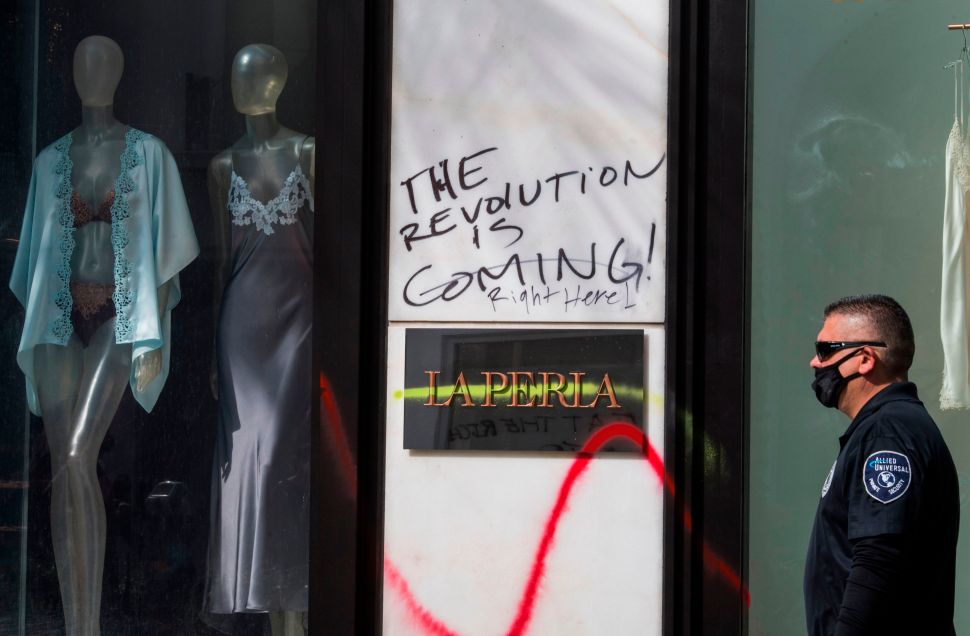