It’s during pressing times that art breaks out of the white cube. This sense of urgency was evident when Visual AIDS projected Kay Rosen’s text-based work AIDS ON GOING GOING ON onto the Guggenheim, Metropolitan Museum of Art, and St. Vincent Hospital at night on December 4, 2015, a few days after World AIDS Day. Just as it was when Russian performance artist Petr Pavlensky nailed his scrotum onto cobblestones of the Red Square on November 10, 2013, on the nation’s Police Day, to silently protest the prominent oppression and indifference in his country.

“Protest is an art form—you could in fact argue that some art is protest with its declaration of values and beliefs,” mixed-media artist Hank Willis Thomas tells Observer. Tonight, an iteration of his ongoing project The Writing on the Wall is being projected onto the U.S. Department of Justice in Washington D.C. The one-hour long projection began at 9 p.m. and is covering the limestone façade of the 85-year-old building at Pennsylvania and Constitution Avenues with a loop of an 11-minute slide of declarations by incarnated people from across the globe.

SEE ALSO: Incarcerated Artists are Expressing the Urgency of Clemency During COVID-19

The work is a collaboration between the New York-based artist and the global think tank Incarceration Nations Network (INN). Unsanctioned, it capitalizes on the nocturnal placidness of the capital to create a piercing reminder of the difficulties faced by those experiencing the impact of COVID-19 behind bars, where social distancing and access to proper treatment is near impossible. The headquarter of the U.S. Department of Justice serves as the canvas for the heartfelt essays, diagrams and notes written by people in prison systems around the world, including those in Ghana, El Salvador, Belgium, and New Zealand, in addition to many penned by inmates in the United States. The project is part of an ongoing collaboration between Thomas and INN; they last took over a number of Lower Manhattan’s iconic and socially-charged buildings, such as in mid-May when the Manhattan Detention Center was illuminated by declarations from those suffering from the dire conditions of incarceration during the pandemic.

INN’s Executive Director and Founder, Dr. Baz Dreisinger, believes the project has been elevated by the overlap between their initiative and the ongoing protests against police brutality and racial injustice. “Policing and prison go hand in hand,” she says. Dreisinger, who spearheads the organization’s global efforts in prison reform, underlines that the project’s main incentive is still to draw attention to the devastating toll COVID-19 has taken on incarcerated people. They, however, embrace the energy shared by the masses taking the streets under a single voice. The project’s hashtag, #detentionisdeath, has lately been switched to #defundtheprisons in solidarity with the protests.

The Writing on the Wall blossomed seven years ago when Dreisinger met Thomas at NYPL’s Schomburg Center for Research in Black Culture and invited him to teach an art class for inmates. The first fruit of their collaboration was an installation of wallpapers at the Museum of Contemporary Art in Detroit (MOCAD), adorned with words collected by Dreisinger from incarcerated people across the world. “Each participating inmate had their own booth,” remembers Dreisinger about the installation, exhibited in 2014. The wallpaper later took different forms when it was shown in New Orleans, Miami, Philadelphia and at the John Jay College of Criminal Justice, where Dreisinger teaches. Last November, they tested alternative display methods with a collapsible booth on the High Line, where an installation of cell blocks and texts remained on view for eight days, supported by programming that included tour guides for school children and prosecutors.

The form it takes tonight is the result of advice from a host of collaborators. In addition to technical and logistical support from D.C.-based video artist and journalist Robin Bell, art and activism collective The Illuminator, and urban design firms Openbox and MASS Design Group, the program is supported by socially active initiatives that expand the projection’s impact beyond its hour-long run. Tonight, the programming on Instagram Live includes statements from representatives of Cure the Streets, which is the Office of the Attorney General’s violence interruption program, the Restorative Justice Program, launched by D.C Attorney General Karl A. Racine in 2015, and formerly incarcerated members of the women’s organization WIRED (Women Involved in Reentry Efforts). The finale, however, belongs to rapper C.S. Armstrong, who will close out with an ode to Nina Simone.

“Artists do not have to take permission to make art,” says Thomas, and, fittingly, he, Dreisinger, and the rest of the team do not plan to slow down. A condensed, two-minute version of the projected work is currently being screened at Bel Aire Diner’s drive-in theater in Queens for the next three weeks. The project’s next destinations this month include Columbus, Ohio, where coronavirus-related deaths among inmates are drastically high, and later Mexico City. 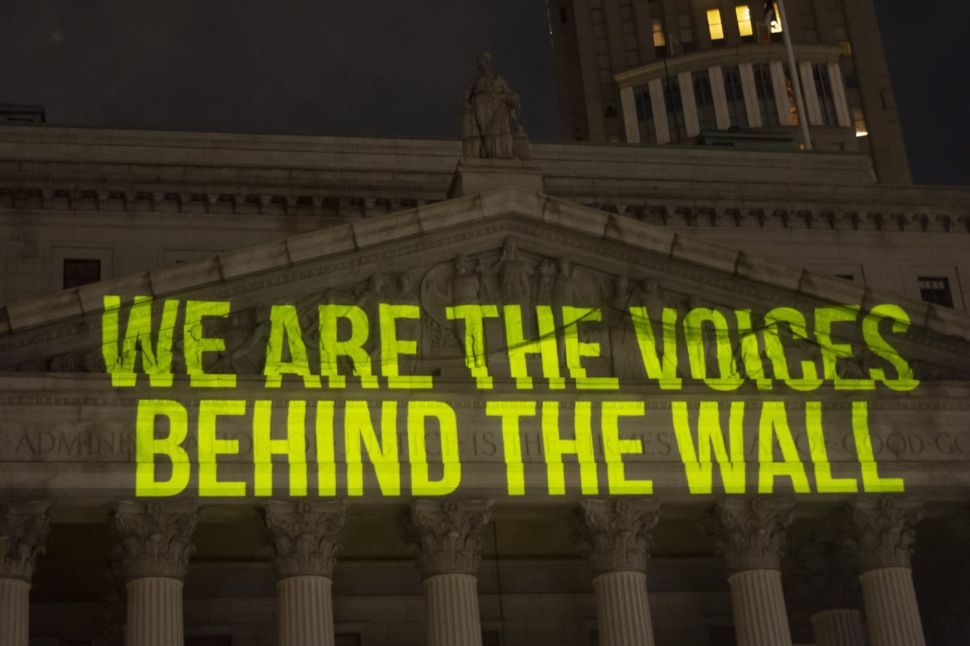