Across the country over the last couple of days, people already at the ends of their ropes due to the coronavirus have watched with shock and horror as protesters in major cities have been pepper sprayed, arrested, beaten and shot at by police officers en masse. In the fallout from the death of George Floyd, an uprising of sorts is underway, and millions of dollars have been donated to bail funds so that freshly-jailed demonstrators can be swiftly released from incarceration. On Wednesday, May 27, an online exhibition went live that fits in seamlessly with the energy throbbing through America right now: Open Call for Clemency, the result of a combined effort between The Confined Arts (TCA) and Release Aging People from Prison (RAPP), is a show that features work by artists who’re currently incarcerated nationwide.

Curated by Claire Kim, the exhibition emphasizes the urgent need for governors to issue clemencies because of the coronavirus, which has proven itself to be particularly deadly to the prison population and to people over the age of 50. Inmates in New York state prisons have been dying at a rate that’s 3.24 times higher since March 30 than it was for the first three months of 2020, and this statistic indicates that New York’s prisons, which are largely poorly ventilated and broadly unsanitary, are deadly places to be confined during a pandemic. Additionally, according to data gathered by the Legal Aid Society, the infection rate at local New York City jails has been more than seven times higher than the city’s average infection rate, and 87 times higher than the country at large. Therefore, the only way to ensure the safety of incarcerated people and correctional workers is actively and drastically reducing the prison population.

The artists featured in Open Call for Clemency have produced work that is wide-ranging in terms of form and execution, and each individual’s astonishing subtlety of expression is offset by the lengthy sentences that they all have in common. Jose “Tony” Medina, an artist who makes delicate creations like baskets and baby shoes by weaving materials like typing paper or vinyl, has been incarcerated for 40 years and is particularly vulnerable to the possibility of COVID-19 infection because he only has one lung; the other he lost to cancer.

Artist Solomon Gideon, Jr. created a painting for the exhibition that represents a flag carried by black Americans during the Silent Parade March of 1917, which was a protest against discrimination and violence organized by the NAACP. “My great, great grandfather marched in the Silent Parade, and the message still resonates today,” Gideon, Jr. said in a statement. “People are turning a blind eye to the risk of COVID-19 in New York state prisons, just like they turned a blind eye to the lynchings in the South.” Gideon, Jr. was released from prison in January after serving 42 years of a 25-to-life sentence.

Those interested in assisting in the process of urgently reducing the national prison population are encouraged to contact their governors directly, and as nightly protests have continued to lead to widespread arrests, it’s clear that citizen intervention on behalf of incarcerated Americans will need to be ongoing and relentless. 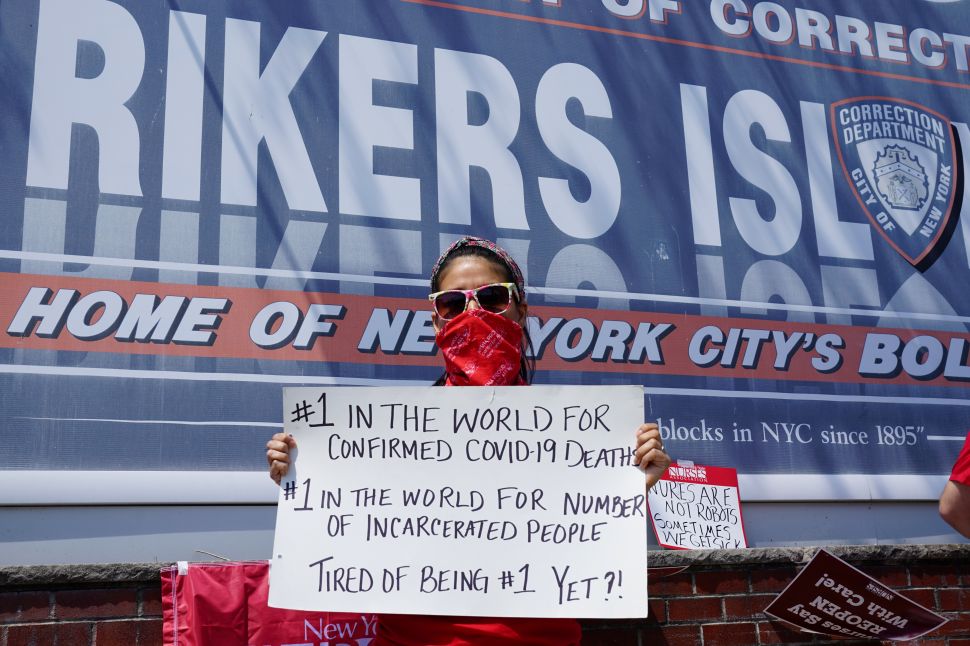