The second film from writer-director Jon Stewart, Irresistible takes the bloated piñata that is the corrupting influence of money in electoral politics and proceeds to beat it with a wet noodle.

Shockingly un-cinematic and utterly devoid of dynamism, the film lacks anything resembling the well-researched insights or sharp-edged comedy that you have come to associate with the former host of The Daily Show. Instead, Irresistible displays a teaspoon-shallow understanding of—or for that matter, interest in—both the D.C. wonks it hopes to poke fun at and the heartland salt-of-the-earthers it supposedly venerates, a condescending stance that unfortunately extends to how it views its audience.

Rather than full-blown characters, Irresistible features crudely fashioned pawns that Stewart apathetically shuffles around an indistinct chessboard—in this case, Rockmart, Georgia standing in for rural Wisconsin—in service of what is essentially an empty polemic.

SEE ALSO: The 6 Dos and Don’ts of Legacy Sequels


Chief among them is Gary Zimmer (Steve Carell), the consummate Democratic Party insider who in the film’s universe was partially responsible for Hillary Clinton’s 2016 loss to Donald Trump. He sees an opportunity for redemption when a low-level staffer alerts him to a Carhartt-wearing retired colonel and widowed farmer named Jack Hastings (Adaptation‘s Chris Cooper, who could do this stuff in his sleep) who displays solid liberal credentials in a viral video. Gary recruits Jack to run for mayor of the tiny, fictional, dying town of Deerlaken, a decision that attracts the fire and money power of the RNC and Gary’s archrival, Faith Brewster (Rose Byrne).

Since his early days playing “Produce Pete” on Stewart’s The Daily Show, we have witnessed Carell imbue even the most ridiculous characters with a soulfulness and inner life. But there is none of that in evidence in his Gary, who is as empty as a Trump rally in Tulsa. Similarly, Mackenzie Davis, who can generally deploy a flinty resolve in even the most drastically underwritten roles, finds little to do with the part of Diana, Jack’s well-meaning daughter. Only Rose Byrne, bringing a chaotic comic fury to her unflappable conservative macher, manages to rise above the tepid material; but then again, we have seen her be equally if not more funny in much better films.

Stewart appears to be no more engaged in the process of filmmaking—that time intensive art form that requires creating complicated characters, building memorable sequences and the like—than our current president is in the day-to-day act of governance.

Instead, he is there to make a point about how the high-finance world of electoral politics and the toxic punditry that keeps it well-oiled has no interest in the problems that face everyday Americans. Unfortunately, this is something that those in the flyover states Stewart shows little actual curiosity about already know because they have lived it. As for the coastal elites, they too are all too aware because they’ve seen Stewart and his former Comedy Central cohort Stephen Colbert make this point on their respective shows with biting irony and devastating urgency, two elements desperately missing here.

One of the film’s less regrettable post-credits sequences features an interview between Stewart and Trevor Potter, the former Chairman of the Federal Election Commission and the lawyer who helped create and explain Colbert’s Super PAC, “Americans for a Better Tomorrow, Tomorrow.” (Those segments rightfully won a Peabody Award in 2011.)

Stewart and Potter demonstrate how profoundly and intractably our corrupt campaign finance laws have decimated the country’s democratic ideals with much more effectiveness than the preceding film did; they also do more than that. The pair serve as a sad reminder of an earlier time, when Stewart and his colleagues in political satire were astute, howlingly funny and knew how to read the room.

Irresistible shows us just how long ago that was, and how far, far away.

Irresistible will be in theaters and on demand June 26. 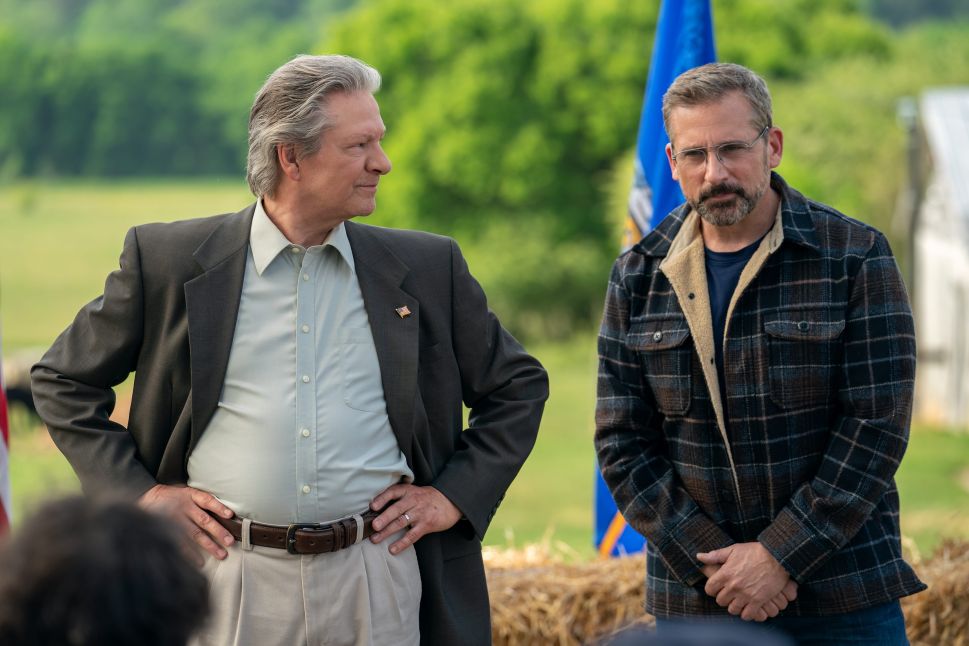