You could be forgiven for jumping to the conclusion that, because Marie-Helene Bertino’s novel Parakeet (out from Farrar, Straus and Giroux) opens just days before the wedding of a woman we will only ever know as “the bride,” that this will be a familiar love story between the future wife and her husband. A love story it certainly is—but the relationship at its center is actually introduced by a wonderful bait and switch about a third of the way through, though Bertino foreshadows its importance from the first page.

When asked how she described her somewhat slender, surreal novel while writing it, given that the storyline is hard to describe, Bertino, speaking to Observer from her home in Brooklyn, summarized it thus: “In broad strokes, it’s about an uncanny bride who, right before her wedding day, has this supernatural visitation by her grandmother who tells her not to marry and gives her a task.”

The task is to find her brother, Tom. The bride, who works as a biographer of people with traumatic brain injuries and describes herself as “ethnically ambiguous” (largely due to grandmother’s Basque/Romany heritage) has been estranged from Tom for years, in part because of his drug addiction, but also because of the popularity he received by turning her life, including a devastating incident in her early adulthood, into a critically-acclaimed play.

And so we follow a story about the sensitive, sticky bond that keeps siblings welded despite time and distance, without quite knowing that’s the journey we’re on. But then, the twists of this winding, dream-like adventure that takes place in the days leading up to the wedding can be hard to keep tabs on. Parakeet is a book that requires the reader’s constant, fixed attention, never sleeping on a word or quite intuiting what’s to follow. This begins with the first sentence: “One week before my wedding day, upon returning to my hotel room with a tube of borrowed toothpaste, I find a small bird waiting inside the area called the antechamber and know within moments it is my grandmother.” In embarking on Parakeet, which is Bertino’s second novel after 2014’s 2 a.m. at the Cat’s Pajamas, one should never think they know what to expect. From conversing with a reptile who runs a Japanese lifestyle blog in a serve-yourself diner to waking up one morning as her mother, the bride does not lead us down predictable paths. And perhaps this checking of expectations might make for good practice, depending on where you stand on the ceremony of weddings, and to a larger extent, the presumed behavior of women within marriage, relationships and society at large.

This bride is deeply ambivalent about the institution in which she is about to enter. She struggles to come up with a reason why she agreed to marry her groom, continually blows off her florist’s entreaties to pick up her bouquet, and fails to display the level of excitement that everyone around her is counting on, correcting words of congratulations with, “Marriage is not an achievement.” In her framing of it, Bertino draws out this ritual’s absurdities enough to make anyone wonder why it’s something to look forward to. “I think that any institution that’s worth its salt should be able to withstand rigorous questioning,” Bertino says, noting she knew she was wading into a territory in which people are prepared to go to blows—or to court—to protect what they think a marriage should be. To this day, that still discourages women from naming the discomfort they may feel with society’s praise of the state of being a bride, or a wife, and all the rigidity that comes with it.

For Bertino, this through-line was about articulating, “I can be as strong as I want as a woman, and societal pressure will still find me. I can live in New York, I can be an artist and societal pressure will still let me know what I’m supposed to be and what role I’m supposed to play,” she says. “So, for me, writing an ambivalent, brown bride was the most radical thing I could think of to do, because there is inordinate pressure on humans to want certain things like marriage, kids, a house, a tenured position, and I was really sick of staying silent about how those things were just not my gods.”

In Parakeet, the constant pressure of what one should act like, look like, or long for if one is a woman is approached from many perspectives, not just within the context of marriage, including when the character of Simone enters the novel. Simone is a trans woman in whom the bride confides and comes to rely on as the days leading up to the wedding draw closer, and as the bride’s experience grows increasingly more wild, fragmented and disconnected from reality. In this way, the book becomes “About transition both from bride to woman and from bride to not bride, and all the different ways that you can be a woman,” Bertino says. Trying to truthfully capture the experiences of a trans character, within a plot awash in elements of the surreal and often teetering on the absurd, meant embarking on a risk for the writer, particularly as we continue to consider who gets to tell certain stories—a concept the book takes up as a storyline when the bride struggles to reconcile seeing her youth play out on stage, as well as in who Bertino chooses to put on the page.

Bertino approaches this task with great sensitivity, and with an acknowledgment that to omit representation from her work also does harm. “Representation has always been important to me both as a writer and as an editor. And, I’m writing my world and what it looks like, which contains LGBTQ folks. But, I am not trans. I was writing across my experience. So, I knew I was charged with making sure I was doing so with linguistic dignity.”

That meant writing from Simone’s point of view was off limits. “I feel comfortable writing from the point of view of the bride, whose experience I share. But that means literally that Simone was ensconced in someone else’s point of view. And so, I had to solve these craft issues so that I could do my most important thing, which was to allow Simone to tell her story.” Simone appears often in conversation, but ultimately leaps off the page in a short monologue without quotes. Bertino hopes in this way she was able to allow the character freedom from being trapped in a point of view, “So that the text itself didn’t become an object of oppression.” And during the editing process, the book was read in draft form by trans professor of English at UC Berkeley Grace Lavery. “She read the book and helped me fill in what I couldn’t possibly know because it wasn’t my lived experience. And she did so with such generosity and soul and the depth of intelligence, it was unbelievable.”

Bertino did her due diligence in many ways in writing this character, but she admits something important also: “I may have made mistakes.” It’s a statement we’ve heard from too few when telling a story—or the thread of one—not based on personal knowledge. It’s a statement more could consider making as we push for better representation within fiction, from writers as well as from those at the top who have kept writing in all forms dominated by white, privileged voices. In her work beyond her personal writing, as a teacher and an editor, bringing change to this industry is Bertino’s primary pursuit. “We have to change the mastheads and we have to change the faculties,” is her constant refrain. “I am dismayed on an everyday basis because mastheads and college faculties look the same as they always have. Not all of them. I’m happy to work for the New School and Catapult Magazine who understand this and represent a wide range of voices, but they are the minority. We will not get anywhere if faculties stay white. There are people who believe that white women can do the work of decolonization. I can’t believe that we’re still there and still having to have these conversations of representation,” she says. She also points to the work that’s being done at the Institute of American Indian Art in Santa Fe, N.M., where she teaches in a low-residency MFA program. “I do feel like that school is having really important conversations about colonization and about who gets to write certain things.”

For her next book, slated to appear in 2022, Bertino returns home to Philadelphia, where she grew up. But if it’s anything like Parakeet, expect it to be sly, funny, heart wrenching, head-spinning and anything but expected. “It’s about an alien girl coming of age in Philadelphia,” she explains, before joking, “You know, one of those conventional stories.” 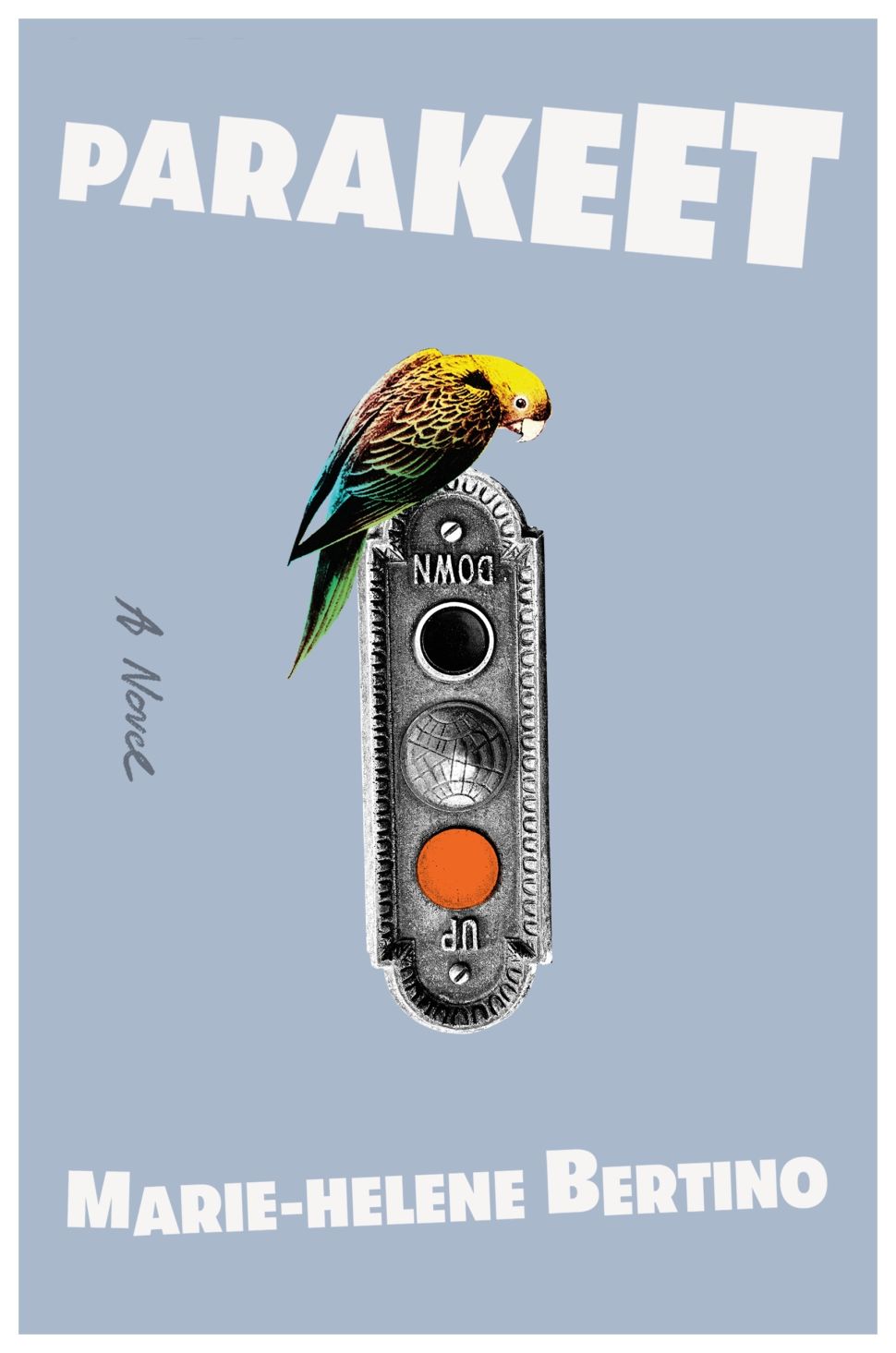