Every time The King of Staten Island star Pete Davidson has mentioned his hometown—either in a joke on SNL’s Weekend Update segment or in a radio interview—he has been decidedly unkind, to put it politely. He once called New York City’s 60-square-mile offshoot the “herpes of the five boroughs.” Another time, he “wished that when Hurricane Sandy hit Staten Island it had finished the job.” It was “just a joke,” he clarified, “you know, like when you’re joking but you mean it.”

With each dig Davidson takes, he makes headlines back home in the Staten Island Advance, whose website typically gets flooded with local commenters calling him a bum, a low life and a slew of insults whose unique combination of butchered Italian-American expletives and neighborhood-specific patois only resonates within the confines of the Island. One former Advance editor warned Davidson in a New York Post op-ed: “Keep talking like that and you may end up sleeping with the fishes.” Aside from complaining about the War on Christmas when the mall’s tree lighting ceremony gets cancelled, mocking and vaguely threatening Davidson has become Staten Island’s favorite online tradition.

And while most of Davidson’s anti-Staten Island material has been centered around the borough’s well documented and deep-rooted problems—its xenophobia, its racism, its heroin addiction, its inclination to swing red during elections—one joke he cracked in 2017 seemed more personal. While explaining to fellow native Islander and SNL cast member, Colin Jost, why Staten Islanders prefer Jost to himself, he said, “You represent what they could be—a kid who got out and went to Harvard. The reason Staten Island hates me is because I represent what they are—a mentally ill community college dropout who got a Game of Thrones tattoo before watching the show.”

Indeed, those are the two types of Staten Islanders—those who stay forever and those who make it out. Those who leave are free to blend into the real world and make something of themselves, provided they’re able to limit their atrocious accents to the occasional slip of “tawk” and “gahbage.” Those who stay stand strong chances of getting sucked into a bigotry bubble in which Costco is a form of culture and the highest career aspiration is running a wedding DJ company called something like Carmine and Vinny’s Touch of Class Entertainment. Jost left, and now enjoys a cosmopolitan lifestyle in which he’s engaged to Academy Award-nominated actress Scarlett Johansson. And while Davidson has had his own worldly success, being SNL’s youngest-ever cast member and once dating an A-list celebrity himself, he still resides in his mom’s Annadale basement and clearly relishes his slacker position as a Staten Islander who stayed.

This fork in the road lies at the heart of Davidson’s first feature film, the Judd Apatow-directed comedic drama The King of Staten Island. Davidson takes on the semi-autobiographical role of 24-year-old Scott Davidson, an ADD-addled aspiring tattoo artist who sells Xanax and still lives with his mother (Marisa Tomei), a nurse and widow of a firefighter. (Davidson’s real-life father was a firefighter who perished in 9/11.) When Davidson’s younger sister (Maude Apatow) goes off to college, it intensifies the family’s spotlight on his arrested development as a pothead townie wasting his life away on video games and Spongebob reruns. While his sister’s story has been told over countless coming-of-age movies, The King of Staten Island instead follows the deadbeat brother and explores how those who stay behind find purpose between the pizzerias of Hylan Boulevard and the pizzerias of Amboy Road.

Apatow’s filmmaking bread and butter has traditionally been his efforts to mine out the pain and emotional depth behind the eyes of male comedic actors like Adam Sandler, Paul Rudd, and Seth Rogen. Idiots, all, but charming idiots. Clearly, the director recognizes something in Davidson worth examining as well. “Pete’s just one of those guys – you see him and right away, you think that he’s going to do great things,” he recently said. But Davidson lacks the acting chops to carry this burden, though his comedic pitfalls—an inability to hold eye contact, distractingly awful tattoos, and using the word “like” to start and end every sentence—do occasionally work in favor of his character’s authenticity here.

As for the setting, The King of Staten Island makes a few nods to its titular location, with Davidson’s seemingly endless wardrobe of Wu-Tang shirts and scenes filmed at North Shore dining mainstay Denino’s, but it struggles to capture what makes the borough uniquely isolating. While many small towns breed an insular, close-mindedness, Staten Island is distinct in that it lies in the shadow of the country’s biggest metropolis. To be a townie there requires a willful, indignant snub of an entire world that can be accessed by a 20-minute ferry ride. “We’re like the only place New Jersey looks down on,” Davidson’s character says at one point.

By pairing Davidson with Bill Burr, who plays a firefighter in romantic pursuit of Davidson’s mother, Apatow does successfully flesh out one of Staten Island’s most famous cultural exports: men who resolve issues not with verbal communication but with fists and loud car horns. It also delves into the Island’s pervasive firefighter culture. In a post-9/11 world, firefighters are the closest thing Staten Island has to royalty aside from the stars of reality shows about mafia housewives. As he often does when the FDNY signal goes up over Hollywood, Steve Buscemi makes a dutiful appearance as the senior member of his ladder company.

The King of Staten Island suffers from the most common trapping of an Apatow flick: mistaking length for depth. The director seems to harbor some insecurity that a 90-minute movie with his name attached will be written off as goofy slapstick, so he bloats his films well beyond the two-hour mark to overcompensate. In the case of The King of Staten Island, he not only hit 137 minutes, but went so overboard in trying to force gravitas that he hired There Will Be Blood cinematographer Robert Elswit. Sure, the love/hate relationship with a hometown is a complex one, full of nuance and subtlety, but Greta Gerwig’s economical Lady Bird proved the story can be told in a scant 95 minutes.

Ultimately, The King of Staten Island achieves Davidson’s intended goal, which is to expand his reflection on his cultural upbringing beyond his three minutes of low-hanging cheap shots on Weekend Update. Whether that sentiment helps translate the comedian and his hometown to a national audience remains to be seen. For Davidson, though, its success or failure should be irrelevant. The film’s release is in itself a triumph for the young comedian. He made it out. He’s a Staten Island success story. 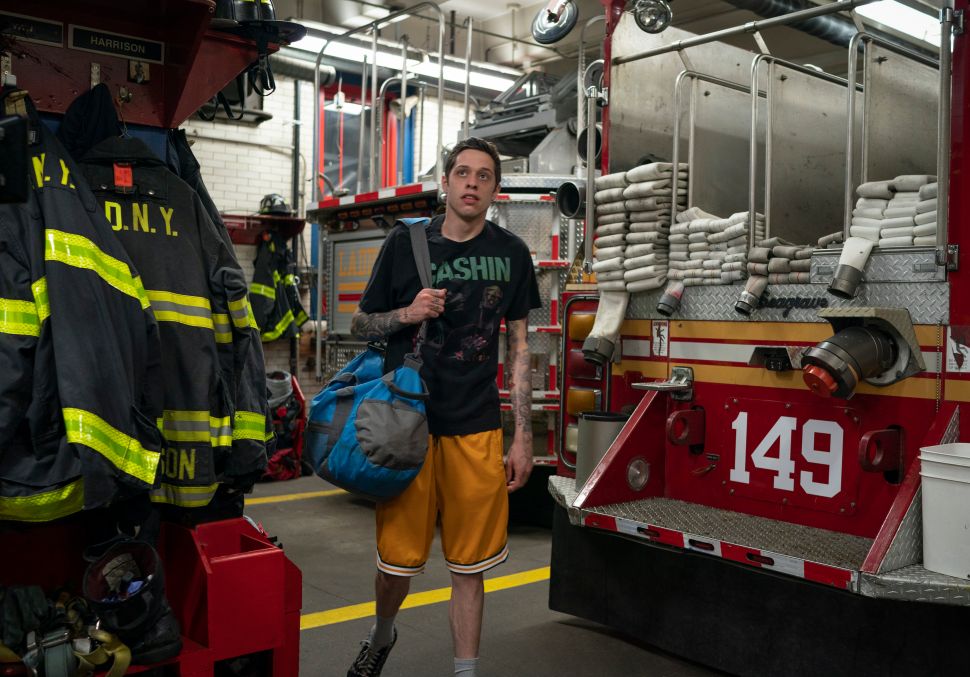