Fake news isn’t a recent phenomenon, a fact that’s clear in Agnieszka Holland’s new film Mr. Jones. In the film, out now on digital and July 3 on VOD, Peter Sarsgaard plays Walter Duranty, the longtime Moscow bureau chief of The New York Times whose articles denied the existence of a deadly famine in the Ukraine. Duranty won a Pulitzer for his work, despite the fact that he reported misinformation that benefited a corrupt government—and in spite of fellow journalist Gareth Jones’ eye-witness accounts to the contrary.

“First, I wanted to work with Agnieszka Holland, who has spent her life making films and being in the world as someone who is speaking truth to power,” Sarsgaard tells Observer of making Mr. Jones. “But second [it was] this idea of the importance of truthful, clear journalism is as old as modern society. There was a time, I guess, when we all lived in really small communities really far away from each other, but now the information is racing back and forth across this country and around the world. So there’s every chance for it to get completely massaged into whatever somebody wants it to be. The amount of bullshit out there is unbelievable. To have a journalist say ‘I saw that with my very eyes’ and someone say it’s the opposite—that happens all the time.”

He adds, laughing, “The size of a crowd, for example, and somebody says it is a large crowd when it’s not a large crowd.”

While the film is set before the events of World War II, looking at Stalin’s propaganda machine, there is something strikingly prescient about Holland’s vision—a film attuned to the realities of America under the Trump administration. At one point a character notes of Hitler, “There’s a great deal of difference between holding a rally and running a country.”

SEE ALSO: How ESPN and Disney Could Move Sports to Streaming

“I doubt that needs any clarification,” Sarsgaard says of the line. “I heard someone the other day comparing the president to Nixon and I was like, ‘He’s so lucky.’ I’m not a fan of Nixon, but Nixon was somebody who understood how to run a government. It’s like that saying where over the course of the day if you think three different people are total assholes then you’re the asshole. If you manage to fire the number of people this administration has managed to fire, you’re the asshole.”

To prepare to play Duranty, Sarsgaard read a few books about him and attempted to read his novels (which he doesn’t recommend). The actor also asked several journalists their perceptions and opinions of Duranty during a press junket for one of his films, just to see if people knew his story. He found that about a third of the journalists had heard of Duranty and those who were familiar felt strongly that Duranty’s Pulitzer should be returned. But despite the film framing the bureau chief as morally ambiguous, Sarsgaard found a lot of empathy for him.

“What I really gathered, what was a recurring theme, was that he was a guy who wanted to be a novelist, not a journalist,” Sarsgaard says. “He was somebody who wanted to be an artist, who hung out with artists. All of his praise was for artists. I thought of Walter Duranty as someone who thought of journalism as ‘Oh that’s something I do in the morning. I put in an hour of journalism and then go hit opium with my friends and talk about the masters.’ The number of amazing people in his circle is astounding.”

Mr. Jones fits solidly into the criteria for what roles Sarsgaard wants to accept these days. The actor, who also has Barry Levinson’s Harry Haft coming out later this year, says it’s all about the people. He, of course, has to balance his schedule with that of his wife, Maggie Gyllenhaal, and consider whether it’s smart to take on too many low-paying gigs in a row. But ultimately it goes back to who he will be working with on the set, which is why he agreed to join the cast of Matt Reeves’ The Batman as District Attorney Gil Colson.

“The bigger something is the harder it is to keep it pure in terms of vision,” says Sarsgaard, who was shooting The Batman in London earlier this year when the lockdown was put in place. “And honestly, with Matt Reeves, on The Batman, he can do it… It’s just such a spectacle. Even on set it’s kind of amazing to see the total professionalism of everyone in their jobs. It’s all the best people at everything. We were there when all the Academy Award stuff was happening and so many people on that movie were up for or received an Academy Award. It was kind of preposterous. You feel like you’re in great hands.”

He adds, of any potential trepidation, “My part is very intense. On a big show like that my main concern was that I would have to do it 150 times—this intense scene and then that intense scene. My character is at nine out of ten for a lot of it. That was going through my head a lot, like ‘How do I maintain this?’”

Now Sarsgaard, who is holed up in Vermont with Gyllenhaal and their two daughters, is waiting to find out when the crew will be back in production. He and Gyllenhaal have used the time to shoot a short film for Netflix’s new Homemade series which will premiere later this month, but mostly it’s been a waiting game to see how and when The Batman will carry on, as well as when he’ll be able to go into production on his next movie, an adaptation of Elena Ferrante’s 2008 novel The Lost Daughter helmed by Gyllenhaal.

“I don’t know when,” the actor says of finishing The Batman. “No one has talked to me about when yet. But at some point we’ll go back. If I’m older in one part of the movie than I am in another you’ll know why. I’ve grown a beard during lockdown and my character is clean shaven and has a shaved head in the movie, so I’ll have to shave it. But I don’t know when that will happen.”

As he waits, Sarsgaard is using his time to consider how to best approach everything that’s happening in the world from a position of privilege. He largely avoids social media and tries to keep his news consumption contained to what he sees as the essential facts (back to that idea of truth in journalism and government propaganda). These days, he has more questions than answers, and he’s trying to find out how to help proactively.

“What does an individual do? How do you participate? Especially someone who has money, a voice—how do you use it? It’s actually pretty confusing at the moment,” the actor says, especially for his generation. “My oldest daughter is so involved in all of it online that I started to realize that my silence, in terms of social media, is because all of it is a little bit foreign to me. I didn’t have my first cell phone under well after college and how do I engage that part of myself? So I haven’t found an answer. I’m actually open to suggestions.” 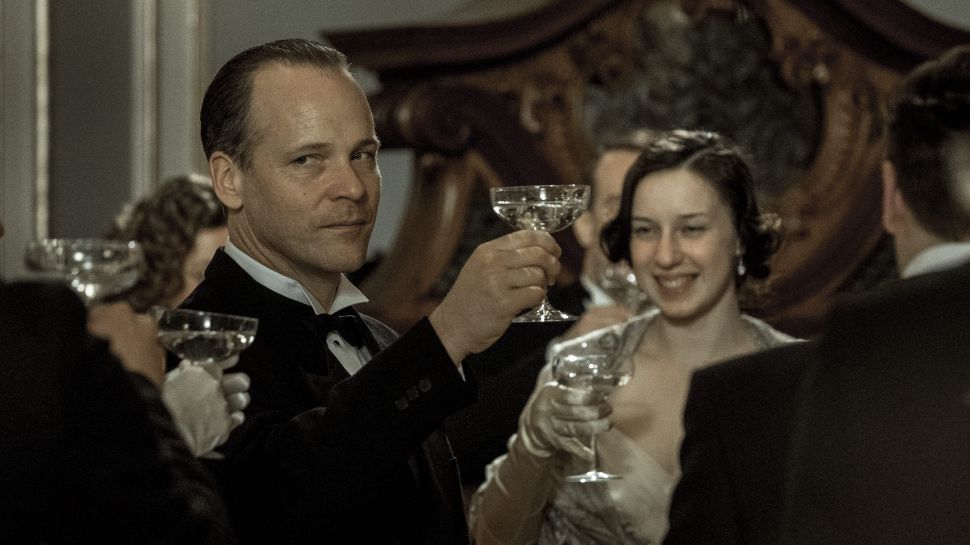