The global lockdown mandated by the spread of coronavirus led to many shifts in behavior. Banana bread recipes were perfected, musical instruments were learned, and, apparently, the lack of physical contact led many to bare their bodies online. According to social media management company Khoros, terms like “nudes” tweeted alongside “coronavirus” jumped up 384 percent on Twitter from the beginning of March to April. All “social norms” around our relationship with naked images on the internet seemed to go out the window. In the U.K., the Nude for Heroes initiative allowed volunteers to donate their nudes to an Onlyfans account that provided free subscriptions to NHS staff. And controversial Instagram influencer Caroline Calloway made waves posting her own naked shot. The paintings followed.

While nude images have long served as inspiration for artists, the lockdown also saw many getting creative with nude work online. One of these artists was Brooklyn-based Amanda Geller. After getting laid off from work due to COVID-19, Geller was talking to a group of female friends who had been similarly let go from service jobs. The idea came up that, with more time on their hands, Geller might spend more time on making art, and they could provide the subject matter. Now, Geller will paint any woman or non-binary person that wants to participate.

“Over 65 women have sent me pictures so far: friends, friends-of-friends, strangers, everyone,” she says. “Most people email me the pictures and then I move them to a folder on my computer and delete them from my email. The only place the pictures exist on my end is in that folder.” After painting the nude, Geller shares it on Instagram. The works are also for sale, with  50 percent of the profits going to relief efforts for hospitality folk affected by COVID-19.

SEE ALSO: At Alone Gallery, There’s Not a Soul in Sight (But You’re Still Being Watched)

For those who have found their interest piqued, Geller has some tips on how to pose. She says it’s trickier to paint a nude if you’re facing directly forward. “I usually recommend people play with a few different poses and move their arms and hips around to create for a more interesting and energetic piece,” she says, and she encourages people not to be shy. “I do think the nude is having a moment. I don’t know if it’s quarantine or it’s just 2020 already so like, come on?”

Another quarantine nude project that’s gained a number of participants is the photo series “Stay Apart Together,” created by performance studio Studio 333 and artist Spencer Tunick. Alonso Gorozpe, Artistic Director of Studio 333, explains that the project, which captured naked volunteers across the world over video conference chat, explored community and togetherness. “There is nothing more natural than the nude body. We hope that this project helps people see the body beyond a sexual object,” he says. We hope this project allows people to see how diverse the bodies are around the world and sparks curiosity on where our differences are, what they mean, as well as what are our human similarities and how the body expresses it.”

Tunick has previously explored the naked body in relation to groups, being known for his large, live gatherings of naked people. In lieu of being able to assemble publically, Tunick reworked his concept for the Zoom era.  It only took a couple of emails to have more than 1,000 applicants from different parts of the world. After a screening process, ensuring participants were over 18, they would then send a link for people to meet online. “The beginning of the session is an interesting moment in which people are getting to know each other,” says Gorozpe. “After a while, everyone is nude and there’s a sense of camaraderie, as if you were sharing an experience with people around the world.”

London-based artist Katy Pryer is behind the Instagram account Draws Nudes, which bears the catchy tagline: “making your private parts public.” She started the account after thinking it was a shame that “so much effort goes into taking nudes only for them to serve one purpose and then that be it.” Her drawing subjects are “90 percent strangers” who contact her on Instagram or over email. “I was once sent one by a girl I met queuing for the bathroom in a bar in Hackney,” she says.

Of her submissions, many were sent with stories of how this project has provided catharsis. She has heard from abuse survivors of victims of revenge, and from countless who have endured a lifetime of body shaming. “For me the most touching stories are from people who are doing this as a sort of vindication, finally being content with their bodies after years of being told to hate them,” she says. “We are all beautiful and worthy of art, and all I’ve ever wanted is to help people see that. I’m a firm believer in the power of owning and celebrating our bodies and think that in doing so, it can set you free.”

As for why she’s seen an increase in submissions during lockdown, Pryer suggests it may be because people are spending more time with themselves. “They’re bored, they’re horny, they’re thinking more introspectively. All of these things are a recipe for nudes, it’s inevitable,” she says. “Before they might be reserved for relationships but now the normal rules do not apply. Nudes have been stripped of their stigma and frankly I’m here for it.” As we enter the widely discussed “new normals,” it appears celebrating the social media nude in the art world will be something coming with us into the uncertain future. 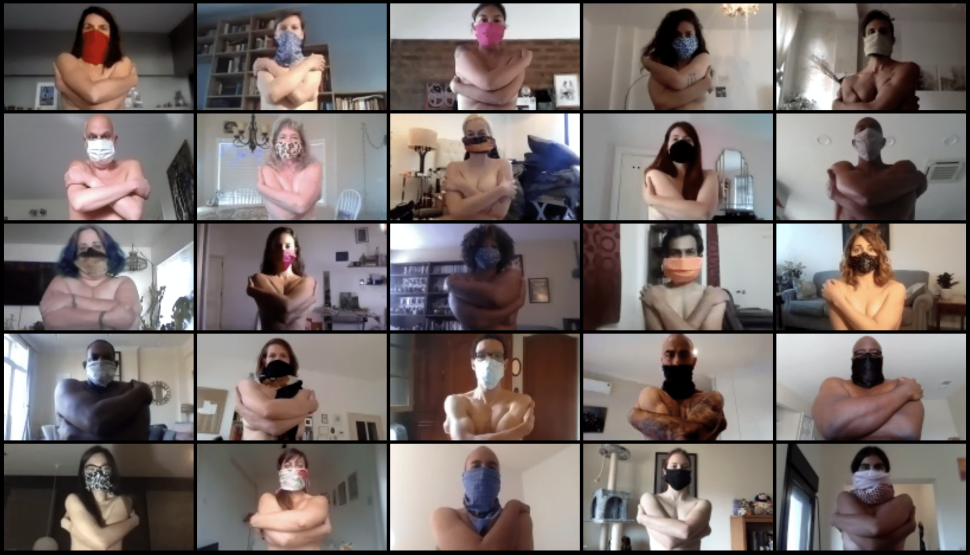