When people think about American Regionalism, a modern art movement that emphasized rural tranquility in response to the devastation of the Great Depression, it’s likely that their minds first jump to American Gothic by Grant Wood. Gothic is one of the most influential renderings of stoicism this country has ever seen, but there’s a flatness to the painting’s characters that is not at all present in In the Big Rock Candy Mountains, a 1948 painting by Roger Medearis that’s going up for sale this week within Sotheby’s American Art auction on June 26. It’s estimated to fetch between $40,000 and $60,000.

Medearis, in many ways a quintessential American Regionalist, was born in Missouri in 1920 and spent crucial years studying under Regionalist master Thomas Hart Benton at the Kansas City Art Institute. However, there’s a strange grotesqueness to Medearis’ style that better aligns him with Mexican muralists like Diego Rivera and José Clemente Orozco than with many of his American peers. The painting is inspired by the 1928 folk song folk song of the same name originally written by Harry McClintock, which describes an idea of paradise as envisioned by a vagrant. The central figure Medearis’ In the Big Rock Candy Mountains is a lolling, big-bellied man who’s splayed recklessly on the ground while brandishing a cigarette. Surrounding him are tangible riches rendered with a surrealist touch: ham hocks and steaks sprout from blossoming trees, pies and fruits lie abandoned at his side and a perfect rainbow crowns a cloudless sky.

Look closer, though, and things get weirder. A cop with a peg leg is approaching in the middle distance, and overhead, a bird with human hands and legs is dangling precariously in the air. One tree is sprouting objects which look like unlit candles, and a cowering dog looks upon his master watchfully. There’s nothing stoic or calm about this completely chaotic vision of American rural life; in fact, In the Big Rock Candy Mountains bears a distinct resemblance to Bosch’s Garden of Earthly Delights triptych. Both artworks suggest surrendering to unimaginable pleasures, but Medearis’ effort feels uniquely American: in this country, both leisure and abstraction read as bizarre. 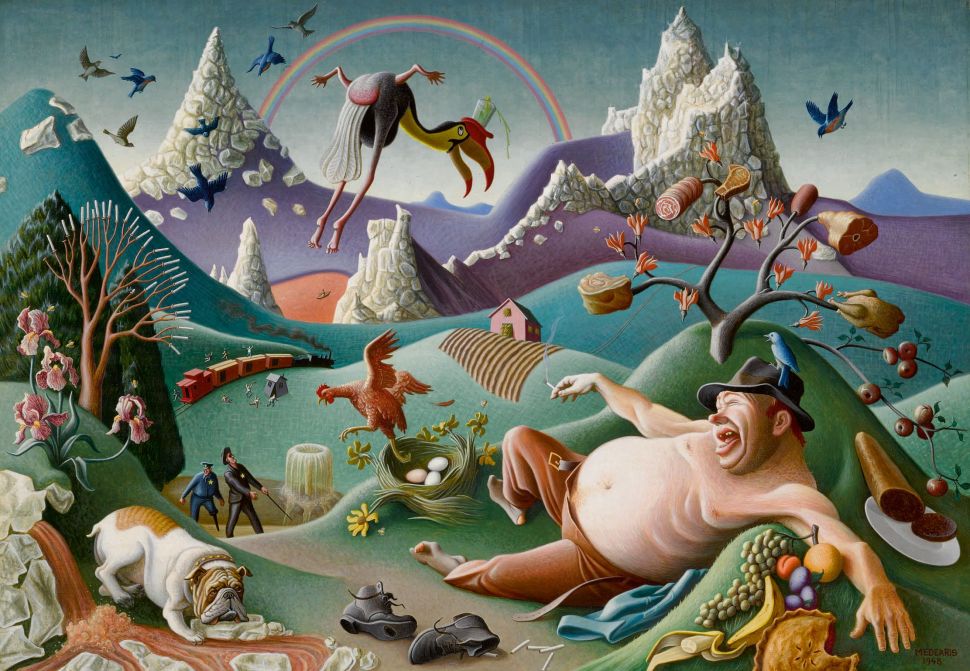