When the Apollo program ended in 1972, humanity closed a chapter of crewed missions to other worlds. Further, when the shuttle program ended in 2011, the United States was no longer capable of launching astronauts on American-made crafts, from American soil.

Still, humans remained committed, as a species, to a continued presence in space. The International Space Station has been continually crewed for nearly 20 years. That’s 20 years, without pause, that human beings have been living off-planet, but our collective imaginations are drawn to more. We want boots on the Moon and Mars and space stations orbiting other locales. We want colony bases. We want to expand.

Now, finally, more than ever before, NASA is committed to making that dream a reality and have, along with international and commercial partners, begun to lay down the bricks which will ultimately build a more permanent road to the stars.

The recent joint mission between NASA and SpaceX, which launched two astronauts to ISS aboard the Crew Dragon craft, returned some of that previous capability to the United States, but that was only the beginning. There are various current and upcoming missions that will pave the way forward, including…

Billed as the first mission to touch the Sun, the Parker Solar Probe (PSP) is set to travel closer to a star than any other spacecraft.

Understanding the way stars work is integral to our understanding of the universe and the only star we have at hand is our Sun.

More important for our immediate needs, however, is understanding the way the Sun’s activity propagates throughout the solar system and how that activity impacts Earth, other planets, and interplanetary space.

PSP uses Venus’ gravity over seven orbits to gradually make its way closer to the Sun’s surface. Eventually, it will get to within 3.8 million miles (for perspective, Earth is 93 million miles from the Sun) and breach the Sun’s atmosphere.

Those of you who have experienced a solar eclipse will have seen that atmosphere, also known as the corona. With each pass, it gathers information about the solar winds, journeying into the space where those particles increase in speed from subsonic to supersonic.

In order to accomplish its mission PSP is fitted with a 4.5-inch heat shield capable of protecting it from temperatures upward of 2,500 degrees Fahrenheit. It was launched in collaboration with Northrop Grumman, who provided the third stage of the ULA Delta IV Heavy rocket.

This marked the first time a Delta IV has flown with a third stage, which was required to get Parker into the required orbit. Northrop Grumman wasn’t the only partner; Collins Aerospace, created a thermal control system to ensure the probe continues to work as designed while enduring the high temperatures of the Sun.

In addition to holding the record for closest solar approach by an artificial object, the Parker Solar Probe also holds the title of fastest spacecraft.

See also: So SpaceX’s Crewed NASA Launch Made It to Space. Now What Happens?

Those gravity assists from Venus have whipped PSP up to 430,000 miles per hour. At that speed, PSP could circumnavigate the globe in about three and a half minutes.

The Parker Solar Probe just completed its fifth flyby of the Sun on June 13 and is now on its way back to Venus, where it will lose orbital energy and allow it to get even closer to the Sun on its next pass.

The information it provides will help us better understand the nature of the solar wind, its impact on the Earth and near-Earth satellites. The solar wind also impacts the solar system far beyond Earth orbit, so understanding its impact will be vital as we expand our presence into deep space.

Planned for launch in July or August of this year, the Mars Perseverance rover is the first craft specifically designed to seek out signs of ancient life on Mars.

While previous missions looked for suitable conditions for life, among other mission objectives, Perseverance is loaded up with scientific instruments capable of looking for direct evidence.

Perseverance includes a drill capable of collecting samples and storing them for later retrieval. It will also look for critical resources to support crewed missions, including testing a process for producing oxygen by way of the Mars Oxygen ISRU Experiment (MOXIE) that will determine if oxygen can be produced from carbon dioxide in Mars’ atmosphere.

Many of the same successful strategies used for Curiosity are being employed on this mission. Most notable is the Sky Crane landing system.

Once on the ground, Perseverance will get to work. The Mastcam-Z will allow for panoramic and stereoscopic images as well as determining the mineralogy of Mars.

The Mars Environmental Dynamics Analyzer (MEDA) will act as a weather station, measuring temperature, winds, humidity, and the properties of Martian dust.

A radar imager (RIMFAX) will penetrate the ground and provide centimeter-scale images of Mars’ geologic structure.

There is one facet of the Perseverance mission which holds a particular fascination: Ingenuity.

In addition to the scientific missions Perseverance will carry out, it is also harboring a stow-away, in the form of a four-pound helicopter.

The tiny craft was named by high school junior, Vaneeza Rupani, who submitted the name to NASA’s Name the Rover contest. Her suggestion was not selected for the rover itself, but she does hold the honor of naming the first craft which will ever fly on an alien world.

Ingenuity has no scientific instruments of its own. Instead, it is meant as a technology demonstration to validate the ability to fly within the Martian atmosphere.

After Perseverance lands, Ingenuity will embark on several flights over a one-month period. It’s the sort of thing that is uniquely human, the pursuit of knowledge for knowledge’s sake. An experiment we’re undertaking just to see if it can be done.

Of course, that knowledge, once obtained, will very likely be put to good use in the design of future crafts.

Perseverance and Ingenuity will ultimately provide information both scientific and practical. It’s entirely possible that Perseverance will settle the question, once and for all, of whether or not there is or ever has been life beyond Earth.

It’s oxygen and experiments will also provide key insight into how we might operate a crewed presence on Mars, not just to visit, but to stay.

Those are missions it shares with another rover, destined for a more familiar locale.

That location is special, as it’s the planned destination of the Artemis missions, which will return humans to the Moon.

VIPER will then spend about 100 days surveying the surface and subsurface of the Moon, in search of ice.

Its findings will inform the Artemis mission by identifying suitable places to visit.

One of the goals of Artemis is not just to visit the Moon again, but to develop a permanent presence. In order to live on the Moon, we need , and not just for the obvious reasons.

can, of course, be used for drinking but it can also be separated, providing an oxygen source as well as hydrogen to be used for fuel.

Because of the Moon’s tilt, there are permanently shadowed regions that scientists believe might hold stores of frozen , making it a perfect location for exploration.

VIPER will help validate if ice is present and if so, how much is available for use.

Astrobitics will use its Griffin lander to touch down on the lunar surface and the company will be responsible for integration of VIPER to the Griffin lander, launch from Earth, and landing on the Moon, according to a statement from NASA. Some of the components of VIPER were also provided by a separate commercial partner, Honeybee Robotics.

The mission represents a continuation of the collaboration between NASA and commercial companies, which will likely remain a key element of our continued exploration.

These missions, each of them embarking over the next couple of years, will pave the way for humanity to finally leave Earth for good, traveling first to the Moon, then to Mars, and beyond. And it isn’t happening in some ambiguous future, it’s happening right now. 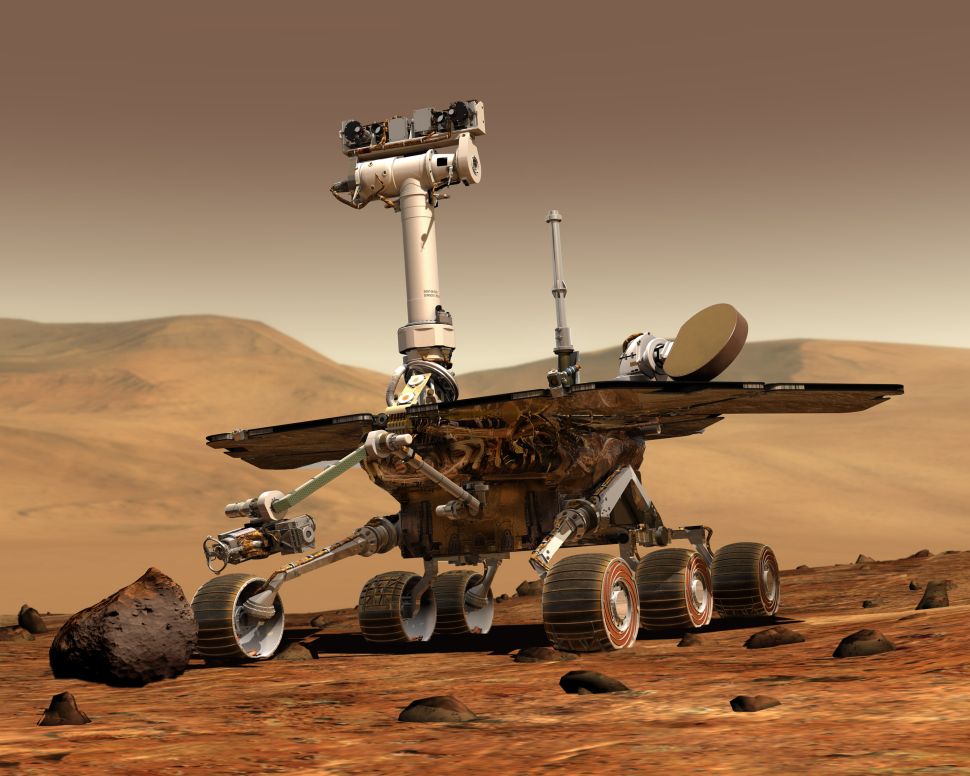