The promise of commercial spaceflight—trips into Earth-orbit, or vacations to the Moon—have long been a hallmark of what a successful future should look like. Yet, despite the best efforts of many private companies, these commercial capabilities have never quite materialized.

At least that was the case until earlier this week when SpaceX, in partnership with NASA, successfully launched two astronauts, Douglas Hurley and Robert Behnken, on a mission to the International Space Station. Not only was it the first time a commercial company has ferried humans into space, it was also the first time astronauts have launched from American soil since the end of the Shuttle program in 2011.

Since that mission, launch services have been provided by an assortment of government and commercial agencies, but all crew services were carried out via Russian Soyuz, as the United States had no crew flight system. That’s what the Demo-2 mission and the Crew Dragon craft intend the fix, bringing the launch and delivery of American astronauts back to the United States.

Already, the mission is largely considered a success. The Crew Dragon successfully lifted off in the afternoon of May 30 and delivered the two-person crew to the ISS nineteen hours later.

While the launch was the exciting moment, bringing in millions of viewers, it was only the beginning of the mission, one which won’t really be successful until both astronauts have returned safely to Earth.

The primary objective of Demo-2 is to serve as the final flight test of SpaceX’s crewed flight systems before NASA certifies it as operational.

Prior tests included a pad abort test, orbital flight test, in-flight abort test, and Demo-1, which tested the Crew Dragon craft, operating autonomously without a crew as it flew to ISS, docked, and returned to Earth.

Once all of these tests were carried out successfully, the last box to tick was to see if it could actually carry astronauts to space and bring them back, a question Demo-2 is destined to answer.

But this mission isn’t as simple as flying to ISS and returning.

In order to certify Crew Dragon for operational missions, Hurley and Behnken must carry out an array of tests on the ship’s capabilities.

Some of these have already been done. The craft is designed to fly autonomously, but manual control is available in the event of system failure.

Crew Dragon was then returned to autonomous flight and allowed to dock with ISS under its own control.

Now that they have arrived, Hurley and Behnken will remain aboard ISS for up to 16 weeks, that’s as long as this version of Crew Dragon is rated for spaceflight.

The total duration of the mission is not yet determined, it depends on a number of factors, including how well Demo-2 held up during its flight to ISS and progress on the next Crew Dragon vehicle.

After certification by NASA, the operational version of the vehicle will be able to carry twice as many astronauts and remain in orbit for twice as long. It will also have an expanded cargo capacity.

Owing to the ambiguous duration of the mission, in addition to the mission’s primary objectives of testing the craft, Bob and Doug were trained to assist Expedition 63 in carrying out ongoing scientific experiments and activities aboard ISS.

One potential objective is the replacement of power system batteries for the station.

A Japanese cargo shipment launched May 20, delivered a set of lithium-ion batteries to replace the aged batteries currently powering ISS.

Installing these batteries could take four to five EVAs, according to Kenny Todd, NASA’s deputy ISS program manager. It’s unclear who will carry out these spacewalks, but Behnken, who completed six spacewalks during his previous shuttle flights, has been trained for the operation.

In the meantime, the health of the solar arrays on the Crew Dragon capsule are being assessed, a key measurement in determining the status of the craft.

The Crew Dragon will be powered on weekly to determine trending on those solar arrays. Only then will NASA be able to begin making determinations as to how long to keep the craft in orbit.

The crew will also be testing communications and ensuring the Crew Dragon is capable of acting as a lifeboat, should the need ever arise.

In short, the crew will be putting Crew Dragon through its paces, ensuring it is capable of serving as a safe and reliable mode of crew delivery to and from ISS.

If all goes well, the operational Crew Dragon is slated to launch at the end of August, carrying four astronauts from NASA and JAXA, the Japanese space agency.

While the duration and nature of the remainder of the Demo-2 mission remains in flux, one important objective has already been carried out, the capturing of a handkerchief-sized American Flag.

That flag was left aboard ISS during the final Shuttle mission in 2011 with a promise that it should remain until launch capability was returned to the United States.

There it has waited, for the last nine years, for someone to claim it.

Upon the arrival of the Demo-2 crew to ISS, Doug Hurley retrieved the flag, a poetic note, as he was part of the crew which left it behind. He’ll be returning it to Earth when he comes home, sometime in the next 6 to 16 weeks. With it, will return the knowledge that the United States can once again send astronauts into space and return them safely to the ground. 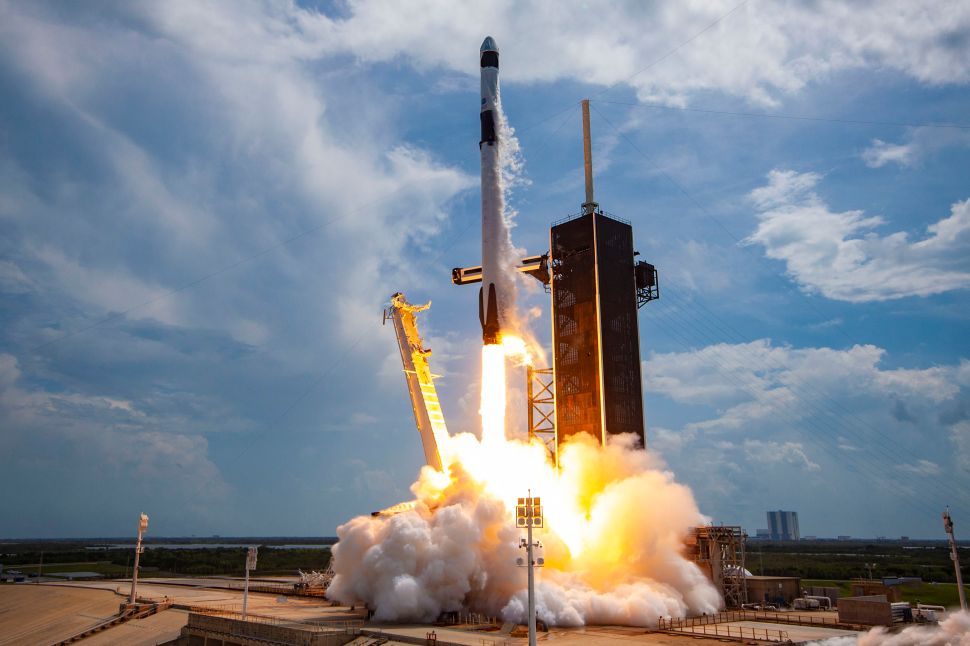