Throughout his years as a street cop in the Minneapolis Police Department, Officer Derek Chauvin had racked up no fewer than 18 official complaints about his behavior while on the force, with no formal discipline ever meted out for his actions. Then, last week, with the help of three other officers, he killed George Floyd, an unarmed Black man who was lying face down on the street and not resisting arrest. On Wednesday, he was charged with second-degree murder. So what was the difference this time around?

His actions were caught on tape, filmed by a teenager on her cell phone camera.

Technology has rewired the criminal justice system and it’s changing the way Americans protest and how the police crack down on those protests. And as the battle between protestors and cops rages in the streets, those tech tools are more important than ever.

Already, there’s a lawsuit against a surveillance tool used by the Minneapolis police to target, track and arrest protesters. The American Civil Liberties Union is suing the makers of the facial-recognition app Clearview AI, which uses artificial intelligence to scrape social media photos to create a facial-recognition app that’s like the Shazam of human beings, but solely used by law enforcement. Clearview’s database consists of roughly 3 billion scraped photos, which it retains even after the user deletes them or makes their accounts private.

The ACLU said in a statement that Clearview is engaging in “unlawful, privacy-destroying surveillance activities” and stated that their lawsuit is to put a stop to its “unlawful surreptitious capture and storage of millions of sensitive biometric identifiers.”

Clearview AI is just the tip of the surveillance tech iceberg being used by law enforcement at protests.

The Federal Customs and Border Patrol flew an unarmed Predator drone over Minneapolis protests to get a more sweeping view of the event. Circling the airspace overhead, the military-grade aircraft was to provide “situational awareness,” as it was equipped with radar, satellite communication links, radio communications, and a live video feed with law enforcement.

Ironically, one protection for protestors has been the use of masks, which have been utilized out of caution due to the ongoing coronavirus pandemic, which still rages despite its displacement from the headlines. For those not wearing masks, the Image Scrubber app allows users to scrub faces from photos to avoid repercussions. The developer is marketing Image Scrubber particularly for those who want to retain anonymity at protests.

There is no protection, however, against more traditional methods used to publicly reveal the identities of arrestees: the NYPD Union doxed Mayor Bill de Blasio’s daughter on Twitter after she was arrested at a Sunday night protest.

Smartphones have become both weapons and points of weakness for both protestors and law enforcement agencies.

Police have been using stingray devices, or IMSI catchers, to pinpoint smartphones. These detection tools impersonate cellular towers and trick all phones in a set area to connect to them, because smartphones are constantly connected to the nearest cellular tower. Even if the screen is turned off, your smartphone is still screaming, “Here is my IMEI (Individual Manufacturer Equipment Identity), and here is my IMSI (Individual Manufacturer Subscriber Identity).”

To protect privacy and civil liberties, protestors try to not take their primary cell phones, but instead use cheap, disposable burner phones. A prepaid phone card helps them remain off-the-grid and keep their personal privacy and data safe. If things get dicey and police start tear-gassing peaceful protesters or collecting devices, they can be broken in half, rendering the data inaccessible.

Those using their primary cell phones are advised to check security settings on their phones to protect their data. Android users can access Settings, then select Security to make sure the Encrypt Disk option is turned on. Encryption stores a phone’s data in an unreadable, scrambled-type form. If someone doesn’t know the encryption password, they can’t access your data.

In taking a nod from last year’s Hong Kong protests, protestors have also been using encrypted messaging apps such as Telegram. Messages sent are encrypted and can only be opened with a private key and are otherwise indecipherable. Telegram also has the optionto self-destruct messages, unsend them or wipe clean entire chats, on both sides of the conversation.

For additional data privacy, The Mission Darkness Window Faraday Bag protects phones from detection by blocking all wireless signals, including WiFi, Bluetooth, cell signals including 5G networks, GPS, RFID, NFC, and radio signals. The bag is military-grade, with a preview window, and was originally designed for law enforcement forensic investigators and armed services to shield electronic devices from RF signals.

Meanwhile, some protestors have taken it upon themselves to keep tabs on those who are keeping tabs on them. Last weekend’s protests saw a record number of downloads of police scanner apps across the U.S. The apps allow protestors to listen in on live audio from over 7,000 police radio scanners. One activist we spoke to uses the police scanner app Broadcastify. 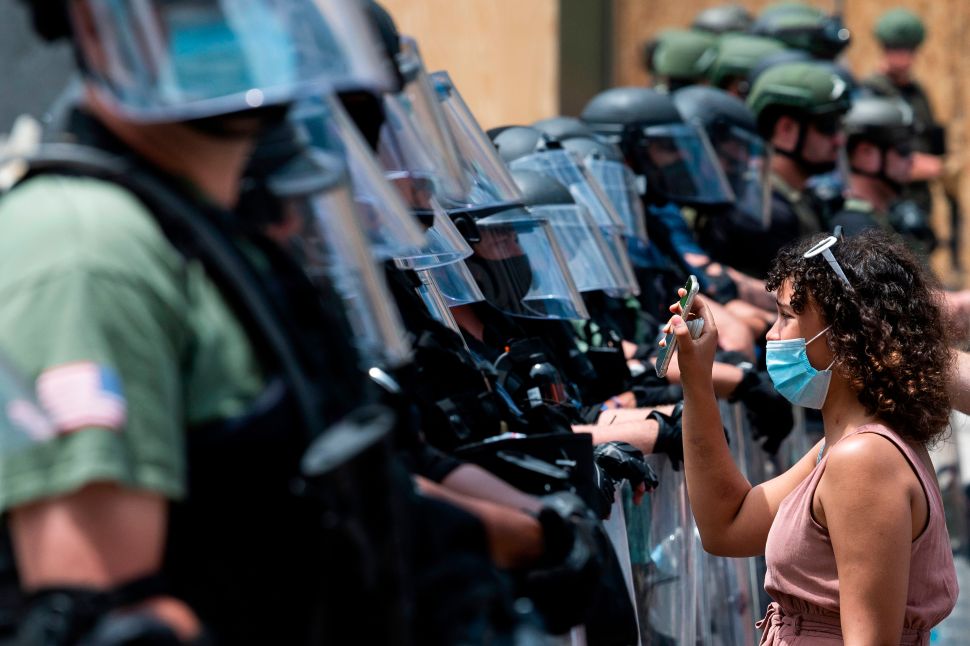