Just six months ago, Nikola Corporation was a largely unknown name to most automobile consumers, outside of perhaps die-hard Nikola Tesla fans or electric vehicle junkies. The five-year-old startup, whose name shares the same origin as Elon Musk’s Tesla, makes hydrogen fuel cell-powered semi-trucks, and once it went public on NASDAQ last Wednesday through a reverse merger with the special-purpose acquisition firm VectoIQ, it’s become a lot more well-known.

Since then, its stock has been on a miraculous rally, skyrocketing over 250 percent in just a week, making its 38-year-old founder and CEO Trevor Milton an overnight multibillionaire. On Monday alone, shares doubled in price. “It really makes no sense,” wrote market expert Barron’s.

On the surface, Monday’s wild stock movement was (as often seen in Tesla’s case) triggered by a founder’s tweet over the weekend. On Sunday, Milton announced on Twitter that Nikola would start taking orders for its pickup truck, Badger, as soon as this month.

It wasn’t news that Nikola had been working on an electric pickup, but the schedule Milton laid out came as quite a surprise, as the company had previously said in its stock registration form that it had no plan to start mass production for Badger anytime soon—unless “we enter into a strategic partnership with an established OEM,” or original equipment manufacturer, such as General Motors.

Nikola’s star products right now are electric heavy-duty trucks, a potential rival to Tesla’s conceptual Semi truck. But even those are in prototype phase; the company needs to first build out an extensive hydrogen refueling station network before its electric trucks can run on highways.

“I think most technologies take 10 years or more to ‘productionize.’ While electric is now more mainstream, there are still issues to be worked out. It is the same with fuel cells. They are already on the road and being improved on,” Milton told Observer in an interview last year.

Nikola has said it has more than 14,000 pre-orders from industrial clients representing over $10 billion in potential revenue. The company plans to roll out its first truck, the Nikola Tre Class 8 BEV, next year. Until then, it’s unlikely the company will turn any profits.

Perhaps a more plausible explanation to Nikola’s recent stock surge lies in external factors. The broad U.S. stock market has riding a swift rebound from its coronavirus low in the past week on reopening news and strong economic reports. Stocks in the electric vehicle sector were doing particularly well. On Monday, Tesla shares reached an all-time high of $950 at the day’s close, valuing the company at a whopping $173 billion, about four times that of GM.

Nikola is on a similar trajectory. After Monday’s rally, the company is currently valued at $27 billion, worth more than Ford and Fiat-Chrysler, Milton bragged on Twitter Tuesday morning. “It may go up or down and that’s life, but I’ll do my part to be the most accessible and direct executive on Twitter,” he added, subtly mirroring the social media-centric leadership style of Tesla’s Musk.

I've wanted to say this my whole adult life; $NKLA is now worth more than Ford and FCA. Nipping on the heels of GM. It may go up or down and that's life but I'll do my part to be the most accessible and direct executive on Twitter. Others will follow. 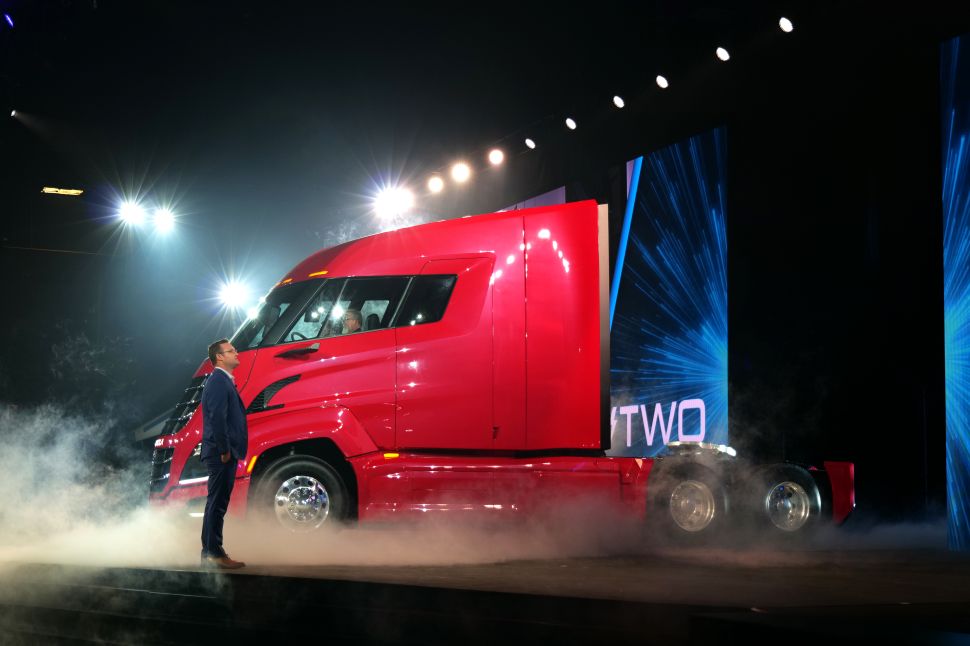