Depression, trauma and anxiety have long been acknowledged as some of the hidden forces behind comedic genius, fueling both the manic runs of Robin Williams and Jim Carrey, and the soulful self-destruction of Lenny Bruce. Save for the occasional come-clean Playboy interview, the why’s and whereto’s of that connection generally remain dormant, lightly tread upon in life only to be excavated by biographers and comedy nerds after the comedian’s death.

Whether with fiction films like 2009’s Funny People or in documentaries like 2018’s The Zen Diaries of Garry Shandling, few directors have  few have done more to promote this framing of the relationship between comedians and their depressive histories than Judd Apatow, king of the comedy geeks and friend to tortured stand-ups everywhere.

But with his latest film, The King of Staten Island, Apatow flips the script and makes the subtext text. Inspired by the life of his star, Saturday Night Live’s elongated sad boy Pete Davidson, and working from a script penned by himself, Davidson and SNL vet Dave Sirus, Apatow rarely spins the sadness that permeates the film and emanates from his star into jazzy improv hilarity.

Instead, we just sort of soak in the despondency, like lukewarm in a half-filled hot tub. While sometimes touching, the results of this noble experiment lack dynamism. Eventually whatever is fresh about the approach is undercut by a familiar will-the-man-child-finally-grow-up trope that has made some of Apatow’s lesser films feel insular and self-indulgent.

The King of Staten Island tells the story of Scott (Davidson), a failed-to-launch aspiring tattoo artist who lives in the titular island with his widowed mother Margie (Marisa Tomei).

As is true with the man who plays him, Scott’s list of ailments are as long as a CVS receipt. In Scott’s case, they include—but are not limited to—ADD, Crohn’s disease, suicidal ideation, bouts of mania and PTSD dating back to his father’s death in a hotel fire when Scott was 7 years old. (Davidson’s own father was a firefighter who died in service during 9/11.) Plus, as he is quick to tell you, “I can’t find my watch.”

Scott deals with his various maladies by self-prescribing an endless stream of weed, video games and SpongeBob reruns, a sad state of affairs begrudgingly accepted by his mom and his off-to-college sister Claire (an excellent Maude Apatow). This undemanding yet cush existence is shattered once his mother begins dating Ray (Bill Burr, who is very good and should have started this dramatic acting thing years ago), a hot-headed divorcee who works the ladder at the same fire station where Scott’s father once served. When Scott and Ray’s conflicts leads to fisticuffs, Margie kicks them both to the curb and Scott is forced to come to terms with both the reality of his late father’s legacy and his friends-with-benefits relationship with Kelsey (The Diary of a Teenage Girl’s wonderful Bel Powley.)

Apatow frontloads the story with some of the comic riffing for which his films are known—and which often cause their famously extended runtimes—as Scott hangs out with his ne’er-do-well friends who serve as human sketch pads for his tattoo practice and who are played by Moises Arias, Ricky Velez and Lou Wilson. But neither Davidson’s nor the film’s heart seem to be truly in the back and forth; by either talent or disposition, Davidson isn’t the kind of performer who lives to elevate others. A latter group scene with reminiscing firefighters played by Burr, Domenick Lombardozzi, Jimmy Tatro and others and lead by a wonderfully world-weary Steve Buscemi, works much better.

As can sometimes be the case with artists who work in the confessional mode, there can be a lack of curiosity to Davidson’s approach, one that at times threatens to infect the film.

The borough of the title doesn’t get the full rendering it deserves; Apatow’s camera seems more interested in the views it has of Manhattan than what Staten Island itself looks like. Similarly, Tomei’s Margie doesn’t really have hopes and dreams of her own and instead serves almost entirely as a pivot point for the emotional growth of knuckleheads Scott and Ray. Powley’s Kelsey, however, almost makes up for this, playing a wannabe civil servant and S.I. booster who is so full-bodied that she is deserving of a spinoff of her own.

Even for those who are keenly attuned to Davidson’s limitations, there is a certain charm, not to mention hard-won truth that informs his sheepish honesty. It ends up giving a spark of authenticity to the film’s otherwise wrung-out theme of personal growth and helps smooth out some of its rough stretches where the film overly relies on the 26-year-old comedian’s still underdeveloped appeal.

“Your dark sense of humor is lost on me,” Scott’s pizzeria owning cousin, played by longtime indie film stalwart Kevin Corrigan, tells him before offering him a job as a busboy.

Yeah, I’m with you, Cuz. But fortunately he has other qualities.

The King of Staten Island will be available to watch on demand Friday, June 12. 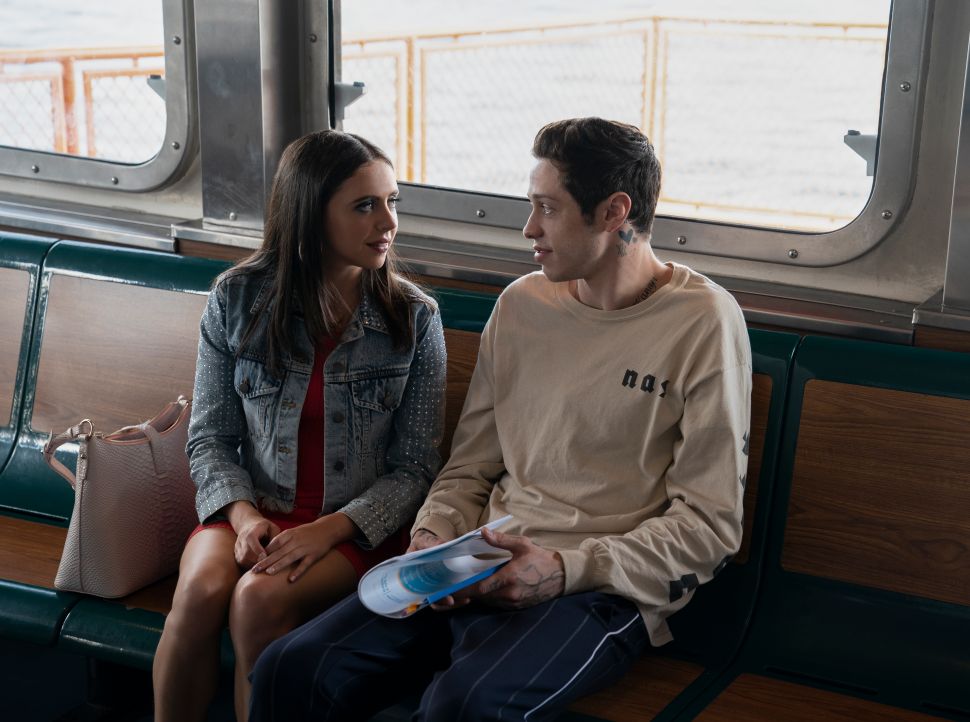