Freaks and Geeks, which infamously ran for less than one season before getting axed by original network NBC, was an honest and affectionate exploration of growing up. The desire to feel included and a sense of belonging runs deep in us all, particularly during adolescence. None of us can look back on high school without the painful pang of an old wound reminding us of a memory we prefer to stow away. But while the show, created byPaul Feig and executive produced by Judd Apatow, founded itself on that elemental yearning, it soon became something deeper. Life’s toughest problems don’t have simple answers, it argued, but there’s immense value in asking the questions anyway.

That idea of embracing pain, questioning yourself and acknowledging the sadness that creeps into life has been a motif in Apatow’s career highlights. The 40 Year-Old Virgin is a raunchy and vulgar comedy, yet it treats the withdrawn depression of its protagonist with a tender seriousness. Knocked Up hasn’t aged gracefully, but its message that life forces maturity onto all of us remains true. Trainwreck, written by Amy Schumer, reins in the hostility of Apatow’s earlier work for something more easily digestible. There’s so much promise and quality scattered throughout the filmmaker’s career that his latest film, The King of Staten Island, feels like a missed opportunity.

SEE ALSO: Why Neo and Trinity Are Back for ‘The Matrix 4’

The King of Staten Island is the semi-autobiographical story of Saturday Night Live star Pete Davidson, who plays burnout Scott. Scott has been a case of arrested development ever since his firefighter father died when he was seven. He’s now reached his mid-20s having achieved little, chasing a dream of becoming a tattoo artist that seems far out of reach. As his ambitious younger sister (Maude Apatow) heads off to college, Scott is still living with his exhausted ER nurse mother (Marisa Tomei) and spends his day smoking weed, hanging with stoner friends and secretly hooking up with his childhood friend Kelsey (Bel Powley). But when his mom starts dating a loudmouth firefighter (Bill Burr), it sets off a chain of events that will force Scott to grapple with his grief and take his first tentative steps toward moving forward in life.

I went in to The King of Staten Island hoping the varying ingredients of Apatow’s previous delectable dishes would mix together for a cinematic meal even Anton Ego would love. I was prepared to enjoy the maturation of Davidson and his ego-less self-assessment of his own pain as co-writer. And while Staten Island is authentic, honest and even hilarious in spots, it ultimately proves as inconsistent as Apatow’s admirably ambitious yet ultimately unfulfilled mix of laughter and tears in previous efforts like This Is 40 and Funny People.

Davidson’s Scott is clearly still traumatized by his father’s death, but he is only sympathetic to a point and Staten Island‘s depiction tests the limits of our compassion. The majority of the running time is a succession of situations in which Scott’s character knowingly self-destructs and fails his friends, family and love interest. Davidson’s character is extremely self-aware, discussing his shortcomings and mental instability openly, but repeatedly lashes out when offered help or the opportunity to improve. That’s a point in and of itself, but it transforms Davidson’s standard charming jerk-with-a-grin shtick into something far more unlikable. Now stretch that to 2 hours and 17 minutes that build toward an unearned payoff.

Staten Island‘s resolution comes so swiftly and neatly that it’s jarring and, much like Silver Linings Playbook, leaves you with a flawed and potentially dangerous message. Despite emphasizing Scott’s deteriorating mental health throughout the film, there’s a suggestion that happy endings cure you of all ills. In reality, we know that depression and grief are often lifelong battles and there is value and closure in understanding that harsh truth. Just look at Davidson’s life in the public eye over the last few years.

Apatow has the grasp of authenticity and deft blend of humor and pain to make movies like an early career Richard Linklater or Cameron Crowe. And Hollywood seems at least partially intrigued at turning Davidson into a new generation’s counter-culture leading man of sorts. But The King of Staten Island, while alternately touching, funny and frustrating, just doesn’t show either of them at their full potential. Somewhere, there’s a 100-minute version of this film that illustrate the lasting effects of trauma more clearly.

The King of Staten Island will be available to watch on demand Friday, June 12.

A previous version of this article described Paul Feig and Judd Apatow as co-creators of Freaks and Geeks. The show was creative by Feig and executive produced by Apatow. 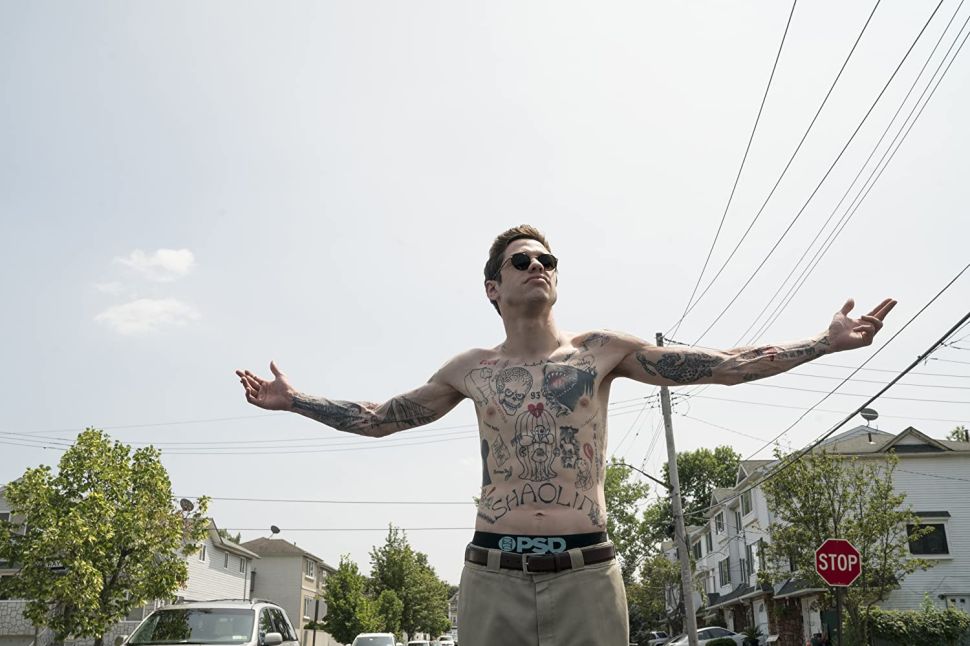