On Tuesday, the Drouot auction house in Paris sold a letter dually written by the artists Vincent van Gogh and Paul Gauguin to the painter Émile Bernard for a head-turning sum of $237,000. The document, bought by the Vincent van Gogh Foundation, is the only known letter to have been written by both van Gogh and Gauguin. It contains a treasure trove of insight into the exploits of the two blossoming masters, including van Gogh’s account of the pair’s visits to brothels, both for recreational and work-related reasons.

“We’ve made some excursions in the brothels, and it’s likely that we’ll eventually go there often to work,” van Gogh wrote in the letter in part. “At the moment Gauguin has a canvas in progress of the same night cafe that I also painted, but with figures seen in the brothels. It promises to become a beautiful thing.”

The time period in which the letter was produced is also extremely relevant: it was penned in November of 1888 in the French city Arles, directly after van Gogh had created a large part of his famous Sunflower series, Bedroom in Arles and Van Gogh’s Chair. This means that, although van Gogh seems to be of sound mind given the tone of the writing in this letter, he was actually weeks away from committing perhaps one of the most famous acts of self-mutilation in history: slicing off his left ear with a razor.

There are hints of discord between van Gogh and Gauguin that are perceptible in the letter as well. For example, van Gogh describes Gauguin as an “unspoiled creature with the instincts of a wild beast,” and that “blood and sex have the edge over ambition” when it comes to Gauguin. Later on, Gauguin implores the letter’s recipient not to take van Gogh too seriously. “Don’t listen to Vincent,” Gauguin writes. “As you know, he’s prone to admire and ditto to be indulgent.” Of course, as history tells us, after this brief meeting, Gauguin and van Gogh never saw each other again, which only adds further magic to this extraordinary document. 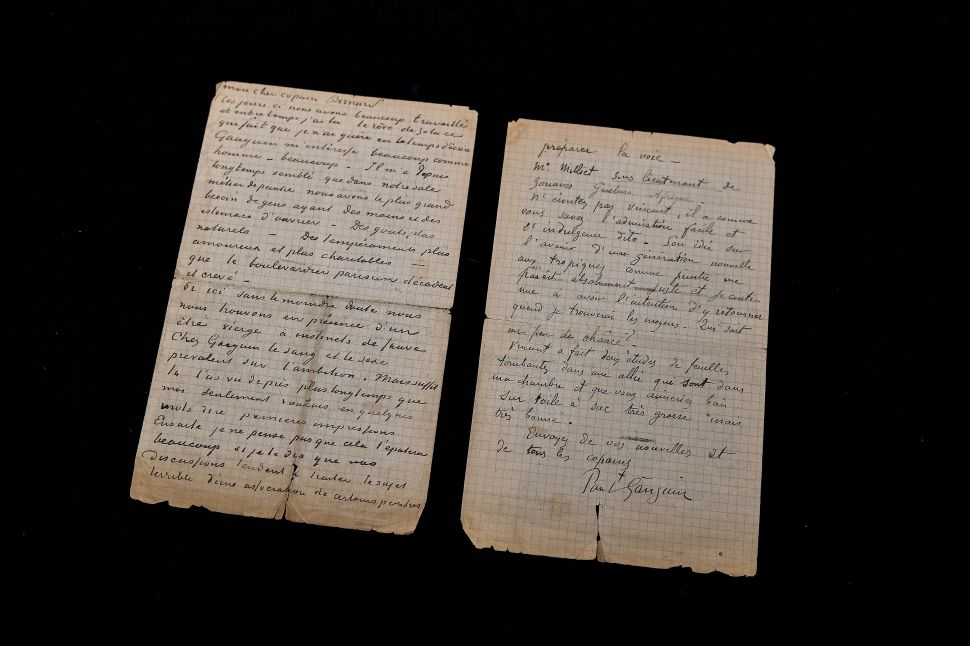