Most of us enjoy television quite a bit, but not enough to keep up with every single streaming service bombarding us with content. Investor studies and consumer surveys all point toward the same fact: the majority of audiences will sign up for a maximum of three streaming subscriptions. But with new platforms barreling into the market at such great frequency over the last year, it’s difficult for the average TV viewer to navigate the increasingly crowded field with fiscal responsibility. In other words, how is any one supposed to know which services are worth spending on?

The first step in any bang-for-your-buck evaluation was to determine how much money each service costs per month. Reelgood opted to include Netflix’s standard package pricing and Hulu’s ad-free package since the four other services only offer commercial-free options. From most expensive to least expensive, the list is as follows: HBO Max ($14.99), Netflix ($12.99), Hulu ($11.99), Prime Video ($8.99), Disney+ ($6.99), and Apple TV+ ($4.99). According to a new survey report from Visual Objects, 73 percent of consumers indicated a monthly investment of less than $50 per month for streaming services. While cost is a crucial factor, you want to be sure you’re actually getting your money’s worth content-wise.

In a 2019 PCMag survey, 38 percent of respondents listed movie availability as the most important streaming factor. To that end, Prime Video holds a considerable lead against its rivals. 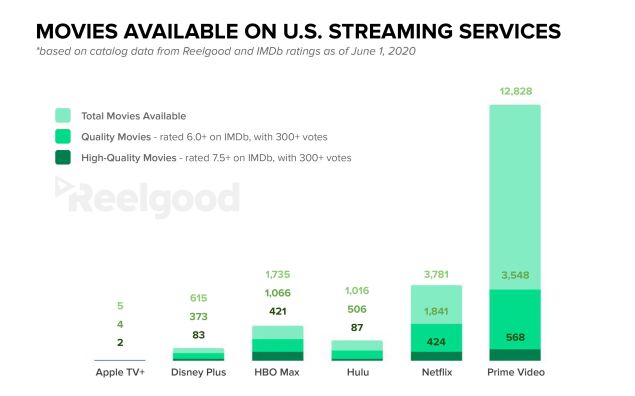 Amazon’s movie library is 2.39x larger than Netflix’s, which houses 3,781 films as of June 1. In terms of IMDb ratings, Amazon also boasts the largest selection of “high-quality” movies, though Netflix (424) and HBO Max (421) are close behind. It’s worth remembering that Amazon claimed the streaming industry’s first-ever Best Picture nomination at the Academy Awards for 2016’s Manchester by the Sea. However, outside of a select few prestige films and successful light-hearted comedies, Amazon’s film studio has struggled with more niche offerings. Due to a succession of box office disappointments, the company is re-thinking its theatrical model. Netflix, meanwhile, continues to pursue both prestige fare such as Martin Scorsese’s The Irishman, which scored 10 Oscar nominations, and commercial blockbusters such as Chris Hemsworth’s Extraction, which was one pace to become Netflix’s most-watched original film.

Disney+ may not match the competition’s volume, but with the back catalogs of Star Wars, Marvel, Pixar and Fox’s film library, the service has managed to thrive since launching in mid-November. As of early May, Disney+ had already collected 54.5 million subscribers. Apple TV+, which launched two weeks before Disney+ with a small library of originals, is now aggressively pursuing more legacy programming to better build out its roster of content.

Of course, television series are also of the utmost importance to TV-first streaming platforms. The battle for quantity and quality is a lot tighter in this race. 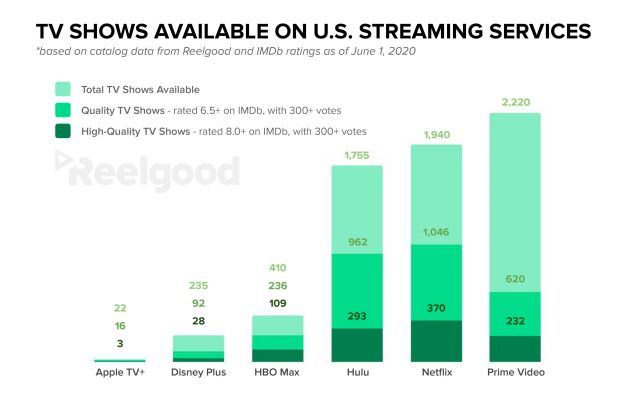 Prime Video may have more overall TV shows than the field, but Netflix houses the greatest number of “high-quality” series with 370. The service is considered the top streaming destination for original programming while Hulu (293) and Amazon (232) round out the top three. (Side Note: Netflix better pace the field in this regard after spending $17 billion on content this year!).

Netflix’s flagship series Stranger Things is still going strong, ranking highly in demand throughout the pandemic despite not airing new episodes. Amazon’s most popular original series overall is The Marvelous Mrs. Maisel while recent sitcom release Upload has drawn a strong amount of interest. The streamer is also spending $1 billion on its upcoming Lord of the Rings TV adaptation, which could be a game-changer. Hulu’s originals are still led by The Handmaid’s Tale, but the service has connected on a handful of new series, such as Ramy and Normal People, over the last 12 months.

Now that we have a better grasp of each service’s library, we can determine just how many films and shows consumers receive for every dollar they spend on these platforms. Then we can determine which streamer offers the most (quantity) and best (quality) selection of titles in 2020. 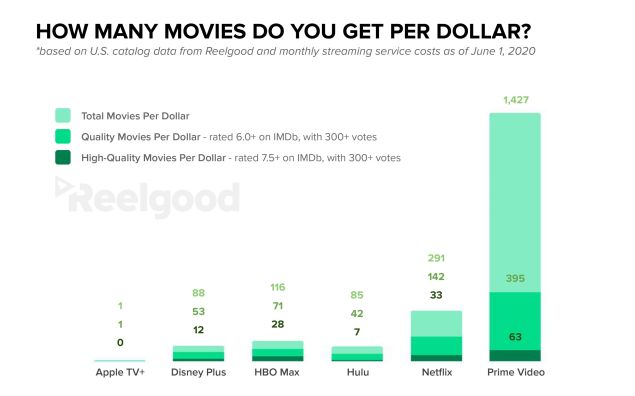 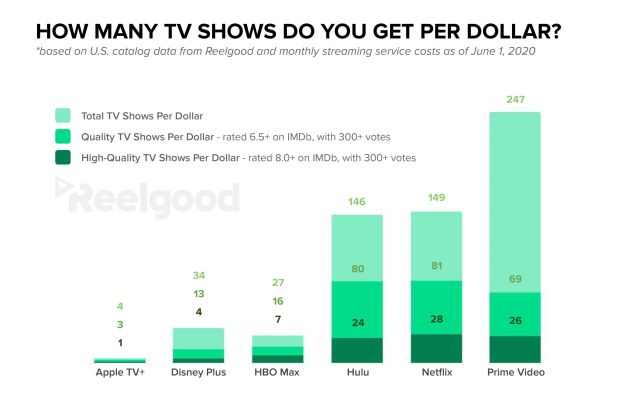 In terms of your per-dollar return, Reelgood’s data found that Prime Video offers the greatest number of movies and TV shows overall. While volume is important (see: Apple TV+), it’s not the only consideration. In terms of high-quality films, Prime Video, Netflix and HBO Max offer the best return on investment. But, if you’re more interested in television shows, you’re better off going with Prime Video, Netflix, and Hulu thanks to their mix of originals and licensed series. At the end of the day, Netflix and Prime Video appear to offer the best bang for your buck among major 2020 streaming services. 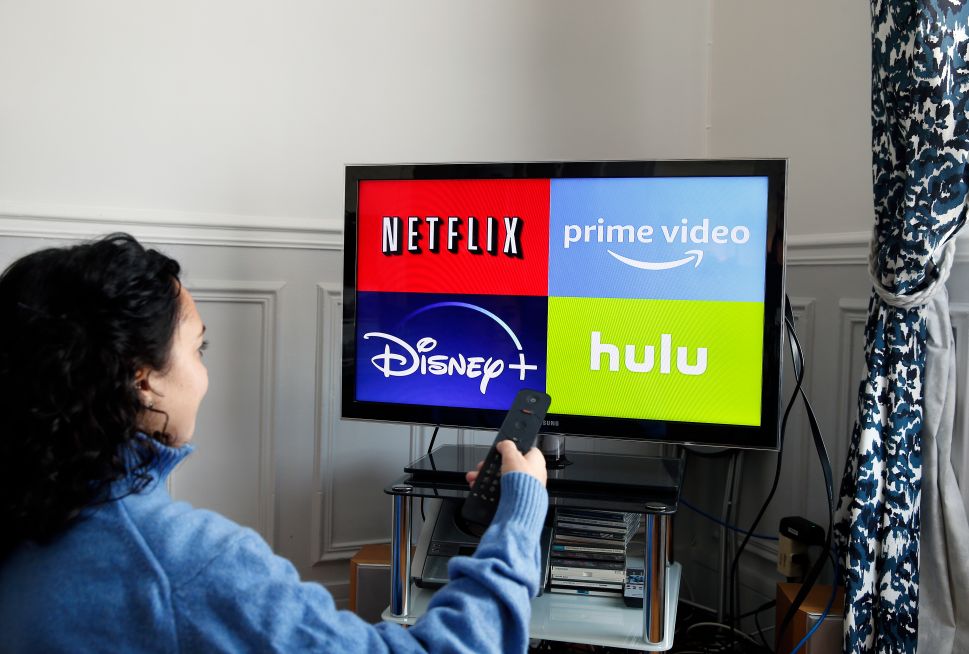