Why did Jack Kerouac write On The Road, and Willie Nelson “On The Road Again?” Why did America sing “Ventura Highway,” and why do people take cross-country road trips? In a book called Why We Drive: Toward a Philosophy of the Open Road, one might expect for these questions to be pondered. Matthew Crawford, the book’s author, could have opted to examine American culture, from manifest destiny to the highway project of the 1950s and beyond. But for Crawford, author of 2009’s Shop Class as Soulcraft and self-described “philosopher-mechanic,” the answer to why people drive has less to do with anything uniquely American and more to do with a universal thirst for power—a feeling of control and possibility that driving provides. “Our mobility as self-directed, embodied beings”—drivers—“is fundamental to our nature as it has evolved over millions of years,” writes Crawford, “and to the distinctly human experience of identity.”

Perhaps it’s only appropriate that Crawford clings to this explanation of why people drive, a very literal explanation that excludes road trips, hitchhikers, Greyhounds and other frequent subjects in American popular culture, given that the argument he ultimately offers in Why We Drive is about what civilization stands to lose with the rise of big tech. Driving and being driven, Crawford argues, are two very different things, and for society to embrace self-driving cars would mean to continue down its current path to passivity in which using one’s hands for anything other than typing is becoming obsolete.

“The most authoritative voices in commerce and technology express a determination to eliminate contingency from life as much as possible, and replace it with machine-generated certainty,” Crawford writes in the introduction. What follows is a criticism, not only of the various risks posed by self-driving cars, but of tech giants’ plot to collect everyone’s data under the guise of safety and optimization and the inevitability of the coming future—a world in which it is impossible for any practical individual to opt out of the automation technology that seeks to swallow their identity and eliminate their freedom.

Interspersed between criticism of tech giants—and incompetent government, which Crawford considers equally dangerous—are stories from the frontlines of driving culture. The author writes with spirit and occasional humor about his adventures in fixing up old cars or “folk engineering,” road rage and its political implications, and his travels around the country. Crawford recalls witnessing communities come together for driving-related events ranging from a demolition derby in Virginia that emphasizes “the sheer, Dionysian joy of destruction” to a kiddie car race in Portland, Ore., that creates just as much of a sense of belonging among participants. Crawford shows that the relationship between driving and civilization also manifests in protest, as it did in France’s recent populist Yellow Vest demonstrations, which included incidents of protesters taking their anger out on photo radar speed traps. The current rise of populism around the world, Crawford argues, is a result of an increased sense of powerlessness and a decreased faith in government that can be traced to driving culture.

As this book attempts to do so much at once, it inevitably falls short, not only of answering the question of why people drive but also of offering any comprehensive philosophy of the road. It feels as if some individual sections could easily be books of their own, but Crawford stops short of giving many ideas their full consideration so that chapters sometimes end abruptly, before it’s entirely clear what point was being made. While anecdotes give meaning to the author’s arguments, the project Crawford set out to accomplish here requires more than just stories arranged haphazardly. Even so, there’s a lot this book offers to chew on. People who read it might just feel inspired to go for an aimless, tech-free, irrational ride, while they are still free to get lost. 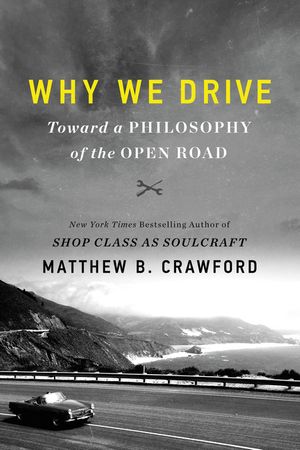