After months of browsing museum collections online and taking up every available artistic practice from drawing to needlepoint, New Yorkers are once again able to see art in person. The Metropolitan Museum of Art will reopen its doors on Saturday, August 29 at a quarter of its regular capacity, and the Museum of the City of New York’s reopening is planned for July 23; until then, what’s available to tide us over? According to the New York Times, several galleries in Chelsea and SoHo are tentatively beginning to open their doors to properly-masked fine art enthusiasts, so we scoured the listings to see which offerings are worth your while.

While this gallery on the fifth floor of 88 Eldridge Street is thus far only open to those who make appointments in advance, David Lewis is currently running a show that centers the artwork of artist John Boskovich. Boskovich’s “Psycho Salon” is the main event here, and it includes a lime green and florescent-lit “Millennial Hallway,” a “Rude Awakening Coffee Nook” stuffed with provocative vintage photographs and a menacing “Mess Hall” painted deep red. If you want a physical space that aptly represents the carnal anxiety of the year 2020, this Boskovich exhibition, which functions as a recreation of the home the artist made for himself in West Hollywood, might be it.

Also accessible by appointment is Perrotin gallery’s new group show “The Secret History of Everything,” which includes the work of artists Katherine Bernhardt, Mauro Bonacina, Sayre Gomez and Julia Wachtel. Overall, the exhibition’s aim is to challenge and explore the “impulse to understand visual culture as a collective narrative,” according to the press release, and it does so by contrasting the different artists’ roving and often contradictory perspectives. For example, Arsham’s rose quartz sculptures of crystallized video tapes could be seen as a luxury artifact, whereas Bernhardt’s mesmerizing paintings make goofy figures like Garfield seem majestic.

SEE ALSO: Behind the Scenes at 5 New York City Galleries Preparing to Reopen

On July 15, Petzel gallery on West 18th street launched its own new group exhibition entitled “A Love Letter to a Nightmare,” which features the work of Hadi Fallahpisheh, Genesis Belanger, Meriem Bennani and others and which was conceived as a direct response to the pandemic and to the aftermath of the killing of George Floyd. This exhibition explores the concept of artistic objectivity, and asks us to consider how Belanger’s work (stoneware eyes, mouths and a dustpan) might tell different truths than Fallahpisheh’s (unique light drawings of things like dogs and humans embracing). Petzel, happily, is currently freely open to the public from Tuesday through Friday.

Peter Blum gallery on 176 Grand Street is currently open by appointment, and there, you can check out the last vestiges of the Nicholas Galanin exhibition that’s open through July 26th. “Carry a Song / Disrupt an Anthem” displays a wide range of Galanin’s creations, including deer hide painted with exquisitely tiny designs, texturally inviting sculpture and Galanin’s spectacular White Noise, American Prayer Rug: a woven tapestry of endless static.

Also available to visit by appointment is Kasmin gallery’s show “The New York Years,” which features three decades of evolution of the painter William N. Copley. Copley was known by his signature name CPLY, and the artist’s style involves a blend of surrealism, overt eroticism and pop-culture infused bombast. 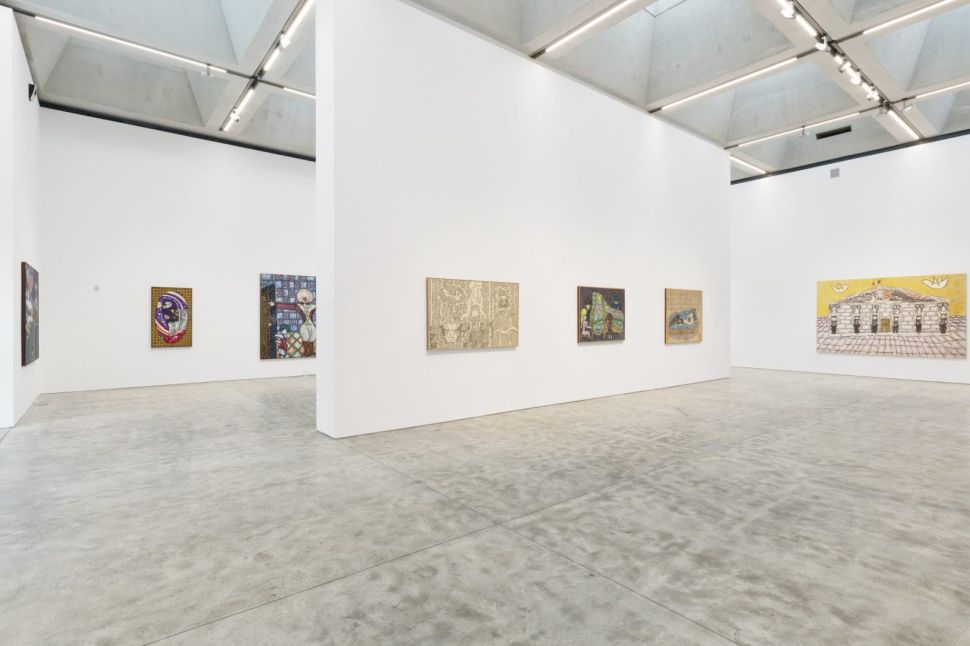