On Wednesday, the world’s richest man, Amazon CEO Jeff Bezos, went to Capitol Hill (virtually) to testify before Congress for the first time, and along with the CEOs from Apple, Google and Facebook, answered questions about their companies’ anti-competitive behavior.

During the five-hour-long Q&A session, Bezos was hit with a wide array of questions, about topics ranging from Amazon’s controversial use of third-party seller data to turning a blind eye to counterfeit products to ongoing negotiations in the company’s streaming media department. You’d think that, as the company’s founder, chairman and CEO, Bezos would know Amazon better than anyone else. Yet, turns out, he doesn’t seem to know much about the day-to-day operations of his own company— at least according to his testimony.

For example, when Rep. Pramila Jayapal asked him whether Amazon has ever used third-party seller data to create competing products under its own label, Bezos said, “I can’t answer yes or no to that question.

“We have a policy against using seller-specific data to aid our private-label business,” he added. “But I can’t guarantee you that that policy has never been violated.”

Pressed to address allegations of Amazon’s data appropriation exposed in a Wall Street Journal investigation in April, Bezos said he didn’t know the specifics yet. “We continue to look into that very carefully.”

In a separate exchange with Rep. David Cicilline, Bezos dodged questions about seller data again, dismissing the lawmaker’s claims that Amazon’s dual role as a platform operator as well as a seller on that very platform is fundamentally anti-competitive.

“Isn’t it an inherent conflict of interest for Amazon to produce and sell products that compete directly with third-party sellers, particularly when you Amazon set the rules of the game?” Cicilline asked Bezos.

He replied, “Consumers are the ones ultimately making the decisions about what to buy, what price to buy at and whom to buy from.”

Later in the hearing, Rep. Lucy McBath asked Bezos whether Amazon has allowed stolen goods to be sold on its platform. Again, he couldn’t give a clear answer. “Not to my knowledge,” Bezos said. “There are more than one million sellers on Amazon. I’m sure there have been stolen goods sold on Amazon.”

When asked what identification Amazon requires from third-party sellers before allowing them to sell on the site, Bezos didn’t know, either. “I believe we do [require real name and address]. Let me get back to you with an accurate answer later,” Bezos told McBath. When asked whether Amazon requires sellers to have a phone number on file, Bezos replied simply, “I don’t know.”

Bezos’ knowledge about Amazon’s new business was hardly more robust. When Rep. Jamie Raskin asked him about Amazon’s ongoing negotiation with AT&T over whether to make its new streaming service, HBO Max, available on Amazon Fire devices, Bezos said he’s “not familiar with the details of those negotiations.”

“You can see at least to outsiders that would look like a structural conflict of interest,” Raskin explained why the negotiation is of public concern, “like you’re using your control over access to people’s living rooms essentially, you’re using that in order to obtain leverage in terms of getting creative content that you want.”

Bezos offered to get the Congressman information later, “because I’m not familiar enough with this.”

“I could imagine that there could be scenarios if we’re just talking in the abstract where it could be inappropriate and scenarios where it would be very normal business and very appropriate,” he commented vaguely. 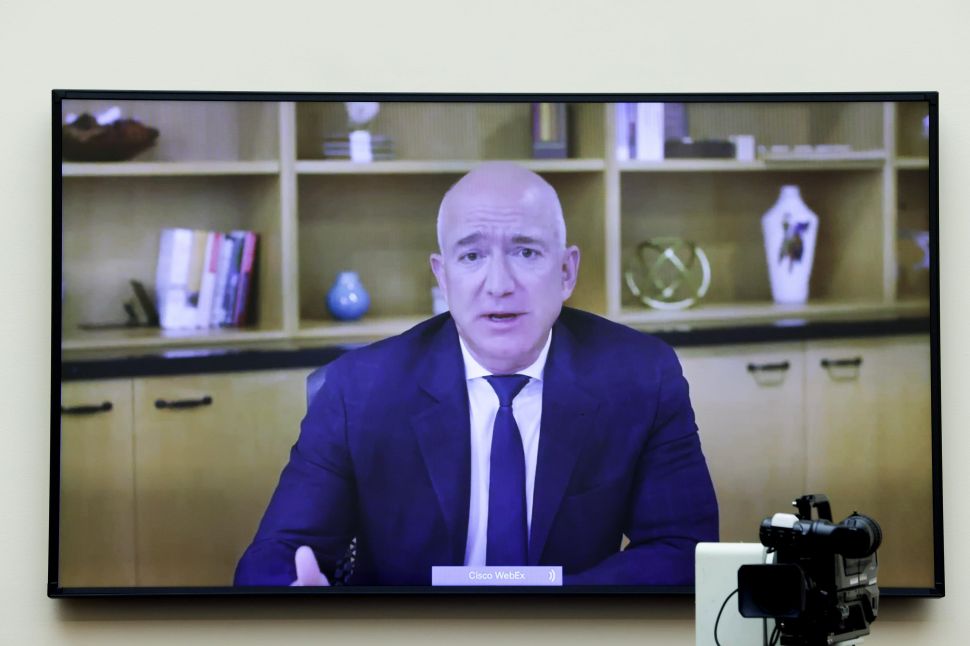