This July, the best places to read are in front of your air conditioner, at the park, on the beach, and at newly reopened outdoor dining tables. New Yorkers are finally able to take advantage of that prime summer pleasure—enjoying long hours of daylight on a restaurant patio alongside a cold drink and a good read (and, now, a mask). Sultry summer days are bringing in some of the season’s biggest book releases, including an essay collection by a beloved New York writer and a return to short stories by one of the medium’s celebrated young voices. If you’ve got some vacation time on your hands, you may even be able finish these five recommendations before Phase III.

Andrew Martin’s 2018 debut novel, Early Work, offered a pitch perfect tale of desultory millennials, becoming (or trying to become) writers while sleeping their way to new adventures. The overlapping stories in Martin’s new collection, Cool for America, promise many of the same pleasures that his, uh, earlier work provided: sharp dialogue, meditations on art and artmaking, and colorful depictions of a young, creative milieu. “No Cops” reintroduces one of the novel’s characters, Leslie, in a kind of prequel. In “Childhood, Boyhood, Youth” (recently published in The Paris Review), a Tolstoy book club becomes a crucible for unrequited love. For Martin’s characters, aesthetic tastes and literary preferences are tantamount to moral codes.

Franco-Morrocan writer Leila Slimani has always embraced thorny subjects. Her first novel, Adèle, focused on a Parisian adulteress who carries out extramarital affairs to elude boredom. Inspired by a sensational 2012 trial in Manhattan, Slimani’s follow-up, The Perfect Nanny, featured a a gruesome infanticide. While the writer’s newly translated volume, Sex and Lies, takes a different form—creative non-fiction—its interests align with Slimani’s novelistic themes: Moroccan identity, female sexuality, power, and prejudice. Through the book, Slimani details her conversations about sex with Moroccan women, from her housekeeper to a young woman she meets online. As Slimani explains in her introduction, “what I want is to render these women’s words directly, as they were spoken to me: their intense and resonant speech, the stories that shook me, upset me, that angered and sometimes disgusted me.”

I Hold a Wolf by the Ears by Laura van den Berg (Farrar, Straus and Giroux, July 28)

Laura van den Berg’s last story collection, Isle of Youth, featured a couple who takes a cursed trip to Patagonia, a newly single woman who follows an acrobatic troupe around Paris, and a sister who ventures to a research station in Antarctica after her brother goes missing. Her new collection, I Hold a Wolf By the Ears, promises an equally strange, psychological world tour. Here, Van den Berg’s stories take the reader to Florida, Sicily and Iceland, under a number of unusual, mysterious circumstances. In “Karolina,” an art restorer sees her brother’s ex-wife in Mexico City shortly after an earthquake. “Last Night” features a once-suicidal woman who opens her tale with two haunting lines: “I want to tell you about the night I got hit by a train and died. The thing is—it never happened.” Van den Berg masterfully creates alienated characters whose uncanny experiences resist tidy interpretations.

With Intimations, the ever-prolific Zadie Smith becomes one of the first essayists to publish a book-length response to the COVID-19 lockdown in the United States. The slender volume features six essays, written in the early months of the crisis. Smith took inspiration from Marcus Aurelius’s Meditations—personal musings and philosophies that the second century Roman Emperor probably never meant to publish.

Smith accepts the risks and potential pleasures of writing from the short view, without waiting to see how her impressions and ideas shift as the pandemic continues. She acknowledges upfront that her personal meditations are “small by definition, short by necessity,” yet her themes—suffering, isolation, and the challenges of adapting to new realities—expand far beyond our current pandemic. 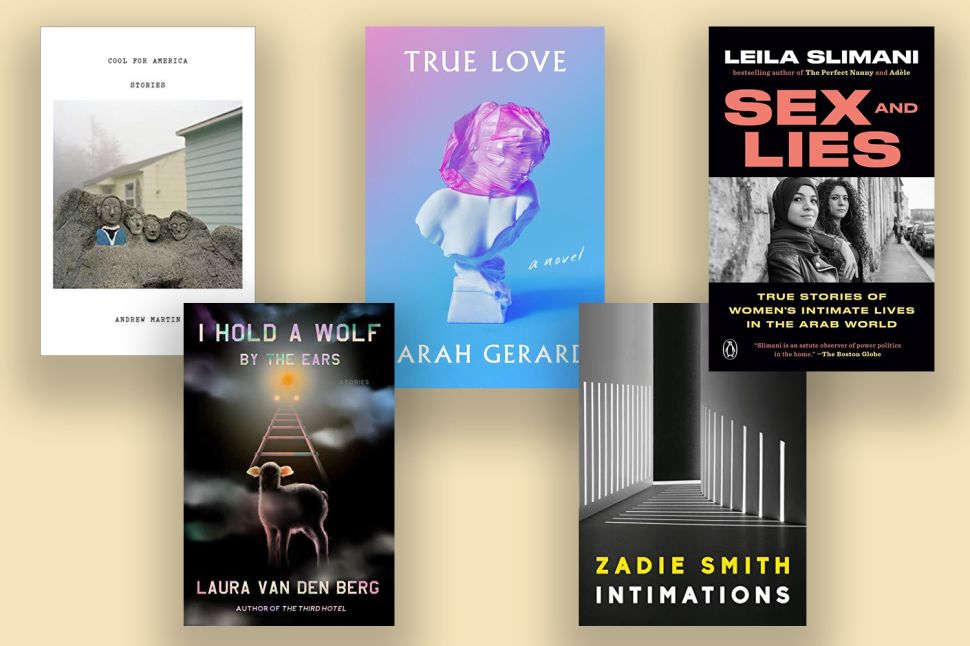