Billy Budd, Benjamin Britten’s epic, seafaring masterpiece that was adapted from Herman Melville and set entirely aboard the battleship HMS Indomitable during the Napoleonic Wars, might be the most claustrophobic opera in the standard repertoire. So, it’s a strange coincidence that, with most of the world practicing some level of home isolation, two wildly different opera companies would both drop performances of Billy Budd the same week: the dynamic, forward-thinking Des Moines Metro Opera (DMMO) and the elegant prototype for English country house opera, the Glyndebourne Festival.

Billy Budd finds Britten, and his librettists, E.M Forster and Eric Crozier, at a place of sweeping, introspective ghostliness. It’s a return to the theme of the outsider, a recurring fascination in Britten’s works, and a hyper-focused yet monumental examination of what happens when the delicate balance of order on a battleship (and in polite society) encounters an enlightened disruptor. As tools to make this point, Britten uses over a dozen named characters, a full male chorus and the largest orchestra of any of his operas (though notably there’s not a single female character).

Kristine McIntyre, director of the Des Moines production from 2017 says, “I love directing Britten because I see so clearly what he’s getting at not only in terms of disruptive influences, but also what feelings like fear, guilt, and loss can do and how fragile closed societies are—how easy to break, how hard to put back together.” The disruptive influence in this 1951 opera is the title character himself, a handsome, cheerful, stuttering sailor, both Christ-like and Apollonian, pressed into service on the Indomitable at the beginning of the opera.

As the story unfolds, recollected by the aged Captain Vere, Billy’s fate spirals beyond control after the ship’s villainous Master-at-arms, John Claggart, falsely accuses him of inciting a mutiny. In McIntyre’s production, the first ever to feature a slightly reduced orchestration by the Britten-Pears Foundation and staged upon a massive, detailed reconstruction of a battleship that juts out into the audience, this spiral has a blithe and heart-wrenching immediacy that makes DMMO’s production unique.

Des Moines’s Billy is baritone Craig Verm, who exudes hornpipe swagger and sings with a smooth, covered sound. But it is the titanic John Claggart of this production, Zachary James, who most effectively seizes on this intimate re-envisioning. Claggart’s hatred for Billy, Iago-like in its inexplicable vehemence, seems to seep from a place of self-denying homoerotic desire for the angelic sailor. James etches this trait of the opera, a nuance informed by Britten’s own experience as a gay man in 1900s England, in terms of chilling cruelty and dramatic power—and at 6-foot-7, James radiates these qualities right through the screen.

If McIntyre’s production ebbs and bristles with the intensity of live theatre, Michael Grandage’s 2010 Glyndebourne production takes a cinematic approach amidst Christopher Oram’s striking set, a somewhat stylized cross-section of the Indomitable. Here, South African baritone Jacques Imbrailo gives a celebrated performance in one of his calling-card roles as Billy. Vocally secure and adept at concealing under a guileless exterior the emotions projected onto him by the other sailors, Imbrailo sets a high bar for his costars and is met most convincingly by John Mark Ainsley, as the conflicted Captain Vere, whose ductile tenor rings out nobly and authentically. And with Sir Mark Elder and the London Philharmonic Orchestra in the pit, the reading of the score is detail-rich and slack-free.

Billy Budd remains an enigmatic piece, both for the way it holds its audience at arm’s length to the action onstage yet simultaneously pulls spectators directly into the world of the Indomitable as we attempt to unpack the complexly drawn characters, just like the deckhands that pack the hull. But despite the all-too-familiar senses of claustrophobia, confinement, and stifling this opera deals in, back-to-back viewings of the opera, surprisingly, did not foment an urge to mutiny in my living room. In fact, in 2020, McIntyre grounds the message of Billy Budd quite readily: “We are living in very difficult times where a lot is being asked of us. This opera shows us what happens when good people fail to act—and so it challenges us to be better, to take responsibility, to be brave.” Whether sheltering in place or protesting in the streets, the unanswered and unanswerable questions of Billy Budd now give us reason to ponder them anew. 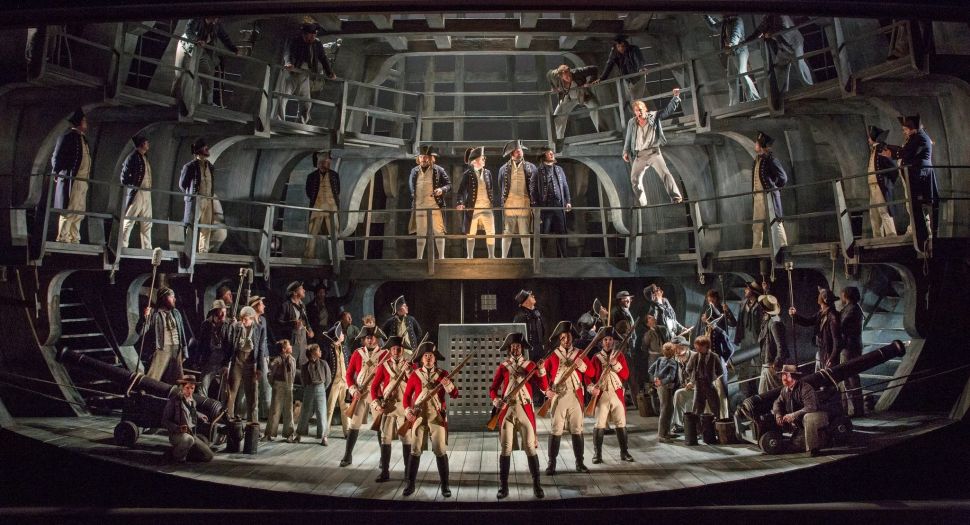