Earlier this month, an Instagram account called Change the Museum that was created so people could anonymously share their stories of discrimination, racism and harassment as employees of art institutions eventually brought about the resignation of Gary Garrels, the former head curator at the San Francisco Museum of Modern Art. Now, a more recently-created Instagram account called Cancel Art Galleries has begun similarly posting submissions about galleries in many different cities, and the numerous allegations being made on the account are both visceral and upsetting. A consistent theme in many of the submissions is simple exclusion: BIPOC are simply not represented in the art world as they should be.

Pay us our fucking CHECKS #cancelartgalleries

In one post, an anonymous commentator alleged that Paul Kasmin, the since-deceased founder of Kasmin gallery, employed a Black personal trainer who he referred to as “black fitness,” rather than identifying her by her real name. Other posts allege a toxic environment at New York-based Gladstone Gallery: “Many of my colleagues were racially abused and treated badly based on their sexual orientation by [Barbara Gladstone’s] senior staff, especially by one person in particular,” one entry reads. “On top of this, Barbara Gladstone is not a friend to women and treats them as inherently lesser than her male employees based on gender alone.”

Still other posts point out how even supposedly well-meaning institutions have the ability to further marginalize and exploit people of color. “I used to work at a small photo gallery,” one person wrote. “I still follow them on social media—as the BLM protests started gaining momentum across the country, they tried to use the moment (on Instagram!) to promote the gallery and sell work (for profit) of a white photographer that had taken photos of the civil rights movement. The owner/director of the gallery is a white woman. The tone deafness is baffling.”

Because of the specificity of many of the posts on the account, it’s likely that the fallout for individuals accused of misconduct will continue to unfold. But anonymous whistleblowers speaking out in tandem in this manner are endlessly important to effecting institutional change on every level: processed together, these voices are demanding that the current power structures be completely torn down. 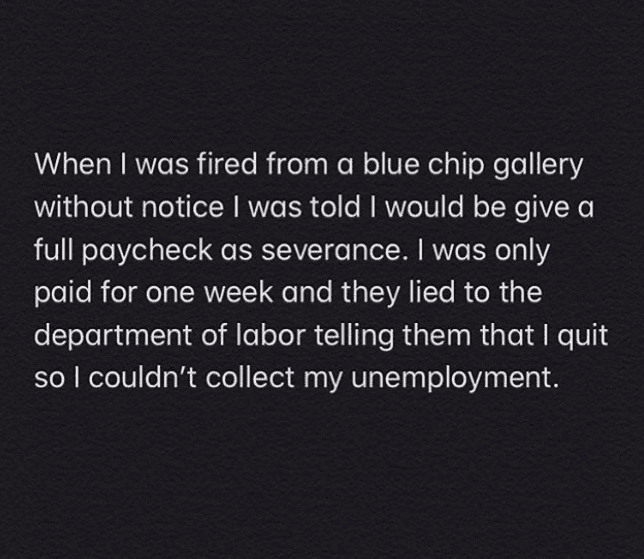