On a terrace of the Clark Art Institute’s hillside Lunder Center galleries stands a creature in white-painted bronze with the name Thaelab, or fox in Arabic. With two back legs fused together, and a tail that points to the left, the sculpture is the outdoor component of “Arrival of the Animals,” Lin May Saeed’s new show at the reopened Clark Art Institute.

“This piece is normally shown with hazelnuts on its back, because Lin doesn’t think public sculpture is enough on its own, and she wants some of the local wildlife,” explained the show’s curator, Robert Wiesenberger, “but it turns out that bears love hazelnuts.”

Most museum visitor services departments don’t monitor bear appetites on a 24-hour camera. “We’ve never confronted this problem before, so unfortunately we’re not showing it with hazelnuts,” he said.

At the Clark’s 140 acres in Williamstown, Mass., three hours’ drive from New York City, creatures of all sorts are still coming. With distancing guidelines, six humans at a time can visit Saeed’s’ first museum exhibition that runs through October 25.

Saeed, 47, who lives in Berlin, works in multiple styles and multiple media. You can take the show’s title at its word. It’s about animals reclaiming the landscape. As you enter the show, a “cave” rimmed with transparent curtains shows a selection of animal images from the Clark’s collection—tigers in a drawing by Eugene Delacroix, an etching of St. Jerome and a lion by Albrecht Dürer. There’s also a gruesome 1854 print by Felix Bracquemond of moles killed by farmers hanging from a tree like trophies of war.

The first works by Saeed that we see are painting-sized “gates” welded in steel frames, one of a bull with a toreador under its feet that looks like a wire drawing imagined by Alexander Calder. Another plays on a Christian motif, with a young St. Jerome pulling a splinter out of a lion’s paw, all inside a frame that seems designed for stained glass.

Next comes a revelation. Several walls of painted sculptural reliefs are of a whitish or light-colored material. There’s a scene of ship—an outline in found metal—in a storm at sea.

In another, a dark panther is in the foreground, with the towers of an empty city in shady detail in the distance behind it. It’s a swampy post-apocalyptic vision, as if humans had been washed away in a sludge that’s a new animal habitat. The city is in the Middle East. No coincidence. Saeed’s father left Iraq for Germany in the 1960s. The frieze’s expressive material—with surprising  texture, shape and shadows—turns out to be Styrofoam, mostly scrounged from someone’s garbage or from construction trash piles.

“I think it’s a good thing when you can make something different out of something that is complete and utter trash. That’s a genuine transformation,” Saeed states in the show’s catalogue. “Carving a relief out of a beautiful piece of fruitwood makes no sense. Having ugliness as your starting point is far more interesting.”

So is Styrofoam the new plaster, only cheaper? It’s enough of an achievement that Saeed gets effects in this material that you could get from limestone, yet Styrofoam is within anyone’s budget.

“For her the history of sculpture is a man’s world. It’s about macho brawn, and you can’t work at scale unless you have money and resources and assistants,” said Wiesenberger.

Styrofoam presents a paradox for the artist. It’s a throwaway material that’s not biodegradable, although anyone who has held hot food in Styrofoam (or stepped on a coffee cup) knows that it comes apart. The future of Saeed’s reliefs, like the future of the fragile world she depicts, is all the more uncertain.

If that sense of uncertainty weren’t enough, in the center of that room, on a pedestal built like a shipping crate, is a sculpted pangolin (also in Styrofoam), the highly-trafficked animal that made news for possible links to the spread of COVID-19.

The exquisite work belies its origins in polystyrene foam. The crate is a reminder that these animals are smuggled as widely as the virus has spread.

Lin May Saeed’s show still sounds an alarm for a calm, wooded place like the Clark. Sterling Clark of Manhattan chose to put a museum of his collection here, in part, because it was thought to lie beyond the range of a nuclear blast that might target New York City. Masks, distancing and limits on visitors in the galleries show that fears of the virus have spread beyond that radius.

Mr. Clark was also known for his love of horses. “Lin would sooner find beauty in a pangolin, which takes a special kind of love,” said Wiesenberger, who noted that Saeed works alone.

Lin May Saeed, COVID-grounded in Berlin, has not seen her retrospective. She oversaw the lighting, with Wiesenberger, on Skype.

On email, she imagined what the setting might look like: “Wild animals cross the area, there is no exclusion here.” Except for the hazelnuts. 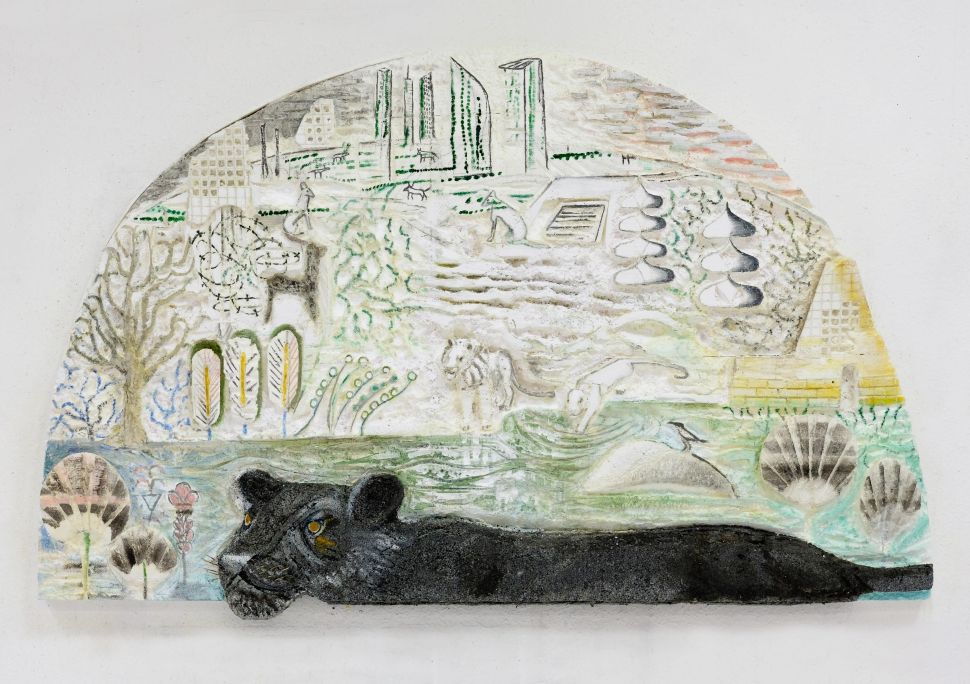