A rare, super-bright comet called NEOWISE is flying across the night sky right now. Several space missions have captured dazzling imagery of the shooting star in recent weeks. And you may have a chance to spot it with the naked eye soon.

The comet was discovered by NASA’s Near-Earth Object Wide-field Infrared Survey Explorer (NEOWISE) on March 27. As it flew closer to the sun and Earth in late June and early July, it became visible to spacecraft originally placed to observe the sun.

From June 22 through June 27, the Solar and Heliospheric Observatory (SOHO), a joint effort between NASA and the European Space Agency (ESA), tracked NEOWISE’s trajectory toward perihelion, or its closest approach to the sun, with a coronagraph, which uses a solid disk to block out the sun’s bright surface so as to reveal its surrounding objects.

On June 24, NASA’s sun-studying probe, the Solar and Terrestrial Relations Observatory (STEREO), snapped a clear photo of NEOWISE, in which the comet looked like a fireball zipping through the night sky.

Then, on July 5, another NASA sun-observing spacecraft, Parker Solar Probe (PSP), took an ultra-high-resolution image of NEOWISE right after the it passed perihelion. The PSP photo, released on July 10, shows two tails on NEOWISE—a broad, fuzzy tail made of dust and a thinner upper tail made of ionized gas. There might be even more to unpack, NASA said.

“Parker Solar Probe’s images appear to show a divide in the ion tail. This could mean that Comet NEOWISE has two ion tails, in addition to its dust tail, though scientists would need more data and analysis to confirm this possibility,” NASA officials wrote in a description of the photo.

Also on July 5, the International Space Station captured an image of NEOWISE flying near Earth’s atmosphere when it orbited above the Mediterranean Sea.

If you wish to catch a glimpse of NEOWISE yourself, the best time to look up is right before dawn or just after sunset. The comet will make its closest approach to Earth on July 22 and should be visible low in the northwestern sky any day now.

NASA will host a “Science Live” broadcast talking about NEOWISE at 3 p.m. EDT on Wednesday. 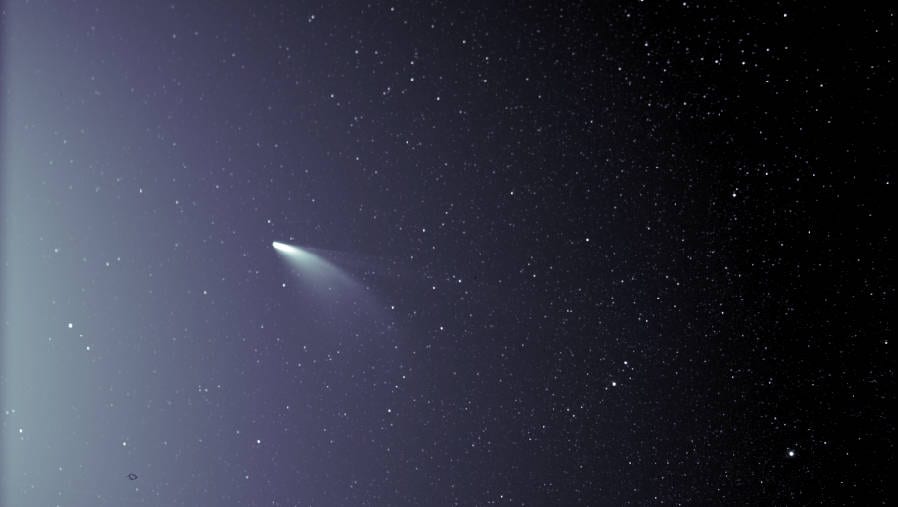