On March 17, the coronavirus pandemic had just been declared a national emergency in the United States, and multidisciplinary artist Rachel Klinghoffer was taking stock of her new reality. Some of her rainbow-hued, alien-like sculptural work was on display in a solo exhibition at The Skirt, a site-specific installation space run by Ortega y Gasset Projects in Gowanus, Brooklyn, and Klinghoffer wasn’t sure whether her show would be closed. “I know I’m going to have to pick up the work at some point, but I don’t know if it’s going to be the date that we planned,” Klinghoffer told Observer, adding that she also had multiple sales of her artwork in progress, and was uncertain about whether the transactions would still take place. On top of her professional concerns, Klinghoffer, who has asthma, was battling intense anxiety about her family’s health and her own.

In “normal” times, the multiplicitous global dance that makes exhibiting art possible is fraught with innumerable complications and essential details that are generally left up to the industry’s logistics experts to sort out: those in charge of the safekeeping and transport of works of art. In the midst of a deadly pandemic, fine art logistics experts found they suddenly didn’t have the answers to the questions they were hearing from galleries, museums and artists like Klinghoffer: could work be deinstalled and returned, should work hanging in empty galleries be stored, could sold work be transported to its new owner? An industry was suddenly forced to throw out the playbook and make up new rules.

SEE ALSO: Behind the Scenes at 5 New York City Galleries Preparing to Reopen

Things came grinding to a halt essentially overnight. In February, amid fresh fear in response to the emergence of the virus that had already spread dangerously in China, Art Basel Hong Kong was called off. Galleries that had been planning to exhibit at the fair were offered a refund of 75 percent on their booth fees, which can often amount to $125,000 for large spaces, but the abruptness of the cancellation still sent art transporters into a tailspin. The New York Times reported that two shipping containers carrying artwork being offered by five different dealers were still at sea and en route to Hong Kong when the fair was cancelled, forcing the galleries to pay around $15,000 to get their art shipped back.

At the initial shock wore off and the virus continued to spread globally, museums began to close, while staffers threw all their energy into putting together digital content. Auction houses postponed or cancelled their live events and started hosting new rosters of digital sales. Galleries closed up shop and began launching online exhibitions. In the midst of all this, the question of what would happen to artwork itself had yet to be fully answered.

Jonathan Schwartz, CEO of Atelier 4, a North American fine art shipping and logistics company headquartered in New York City, told Observer that before the pandemic hit, “We were a company that spread its services between domestic transport, climate storage, custom casework and international forwarding. After the March 22 shutdown, we became a storage company.” In-process shipments were called off, ongoing transactions were suspended and panicked European dealers called in last-minute favors in the hopes of satisfying skittish yet demanding clients.

In a moment when only the shipment of certain commodities was considered to be “essential,” fine art handlers were operating in a grey area; not entirely certain about how to move forward and questioning whether they even should. Schwartz described an incident wherein an overseas client demanded that a work being held in a New York Atelier 4 facility be shipped to them after the state’s March 22nd PAUSE shutdown took effect, which the company refused to do. However, around the same time,the company went ahead with shipping a work of art from one of their storage facilities in Florida to a client in Switzerland because COVID-19 laws and restrictions differed from state to state, and continue to do so.

Professional art shippers have also had to rush to come up with new social distancing and customer-interaction protocols for their employees and clients. At Atelier 4, customers are now asked to place items “in a single pre-designated location where distancing protocols can be maintained” when shippers arrive to pick them up. But the extreme variety of materials used in different artworks introduces a host of new questions for every job. How long does the virus last on alloy? What about marble? Should wooden crates be wiped down with something alcohol-based? What about cardboard containers? And so on.

Additionally, it’s become essential for art shipping businesses to ensure that their various facilities are safe to navigate, and these types of necessary undertakings can get very expensive. “We spent tens of thousands of dollars trying to secure masks and sanitizers,” Paul Cannon, the Managing Director at Gander & White Shipping Incorporated, told Observer. “They’re a bit more readily available now, but there was one point where I came into the office every day just trying to source all that. It was really difficult.” In preparation for the art market to reopen somewhat, Gander & White, which has American locations in New York, Los Angeles, Miami, Palm Beach and San Francisco, has been preparing a handful of viewing rooms for galleries or private clients who may want to make use of them.

“Each location is following either state mandate or government mandated guidelines,” Cannon said. “Visitors who’re coming for a view will have to complete a form with various obvious questions. Have you had any COVID-19 symptoms? Have you been around anybody who’s had symptoms? Have you travelled abroad? We’re all wearing masks, we’ve got hand sanitizing stations and wipes in each viewing room. We’ve got all types of new gadgets to try to keep people safe.”

For employees and management, maintaining the cleanliness of art storage facilities is just as essential as ensuring that client-facing spaces are safe to navigate. “Anything in your warehouse that’s a fixture like a light switch or doorknob is being disinfected regularly,” Schwartz said. “At the interior loading dock, we treat everything like it’s contaminated and focus on wiping down everything. Every time we address a task, when the task is over, we disinfect ourselves. We don’t relax until we’re in a designated safe zone.”

Of course, long before these new precautions were put in place, many institutions in the art world found it necessary to lay off or furlough huge swaths of staffers. “When the pandemic first hit, we furloughed the majority of our staff, which enabled us to continue paying their benefits which was really important for us,” Cannon said. “In the last four to five weeks we’ve been bringing staff back, and I think we’re probably at around 90 percent at the moment, and the layoffs were less than 5 percent or so.” According to Schwartz, Atelier 4 initially furloughed 75 percent of the company, or 65 employees, but has since brought half of them back. In and of itself, the return process can be extremely fraught for furloughed fine art shippers.

With Paul Cannon’s employees, “it’s a spectrum from ‘I’m so glad to be back at work,’ to ‘I’m not leaving my house, I can’t come back,’” Cannon said, “and you get everything in between. But what I find is that once they’re back in the environment for at least a week, they are genuinely beginning to relax and seeing that the world is still continuing. I think they see that management is trying to take them extremely seriously because we’re people too, with families who need that kind of reassurance.”

Although art shipping employees are now tentatively coming back to work, there’s much that’s still unclear about how global art transportation will sustainably function going forward. The pandemic has severely reduced the amount of flights being made by commercial and cargo airplanes, meaning that international shipment rates have become much more expensive. Similarly, social distancing protocols have necessitated that shipment businesses incur the cost of additional vehicular ground transport. “Before, there might be three people on a truck; we can’t send three out now,” Cannon said. “Two will go on the truck, and then we’ll get a van or a car for the third person to meet them.”

For another example, traditionally, museums loaning out fine art for exhibitions will insist on the supervision of a courier, or a person who stays with a work of art through every step of its transport from point A to point B. Because of the degree to which the pandemic has made person-to-person interaction more dangerous, members of the fine art shipping community have begun exploring the possibility of using virtual couriers (an apparatus that could track the location and status of a work of art) so that art could potentially be moved largely without human intervention. The sudden absence of art fairs is also a huge concern in the shipping industry: without those events, the volume of work simply won’t be there at the capacity it had been.

The one fact that everyone seems to agree upon is that no matter what happens, art collectors will continue to want to purchase art. Knowing this, the challenge for the art shipment industry becomes adjusting to the new needs of their customers. “We’ve seen, for example, Sotheby’s and the other galleries open up pop-up shops in the Hamptons, because that’s where a lot of the New York wealthy have disappeared to,” Cannon said. “How do we keep up with that? What new services can we come up with to serve galleries and clients and auction houses?”

In the foreground of all this uncertainty is the fact that the United States is being hit harder by COVID-19 than any other country in the world. Due to a toxic combination of a woefully insufficient federal response and the corrosive effects of American individualism, it’s highly likely that infection rates will continue to spike and fluctuate all across the country until a vaccine is developed. In the midst of a crisis that’s very much still unfolding, art world professionals from every corner of the industry are taking things day by day, and counting their small victories.

During the last week of June, which she described as “a very intense art moving week,” the artist Rachel Klinghoffer finally began to feel optimistic. “I literally have just acquired back most of my work, and most of one other show that I was in that opened but no one ever physically got in there; there’s just images of it,” Klinghoffer said. “That show is coming back, they’re bringing it back up at the end of August.” Even better, the sales that Klinghoffer had been uncertain about in March ultimately went though.

“It makes me feel hopeful that there are collectors buying and supporting artists out there,” said Klinghoffer, who added that she’s discovered renewed liberation in her artistic practice. “I’ve reached a whole other level of appreciation, enjoyment and longevity in a different type of way that I’d never even thought about before. I don’t want to be doing anything the same way; everything’s completely reevaluated. The disparities in this world are too great not to recognize that if you are human.” 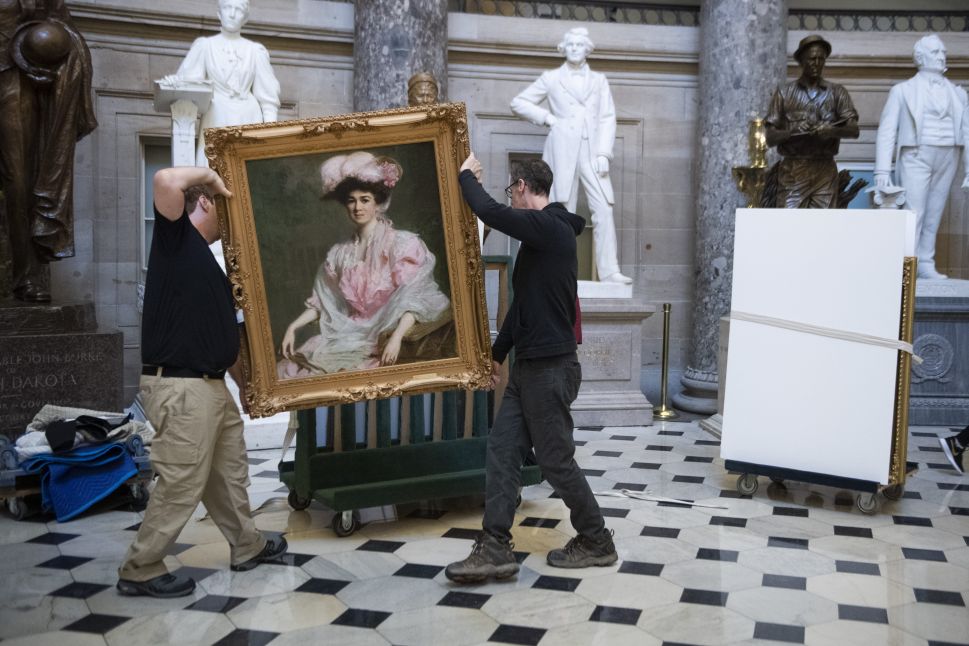