Frida Kahlo‘s extraordinary work has captivated consumers of art for generations, but one work in particular, The Wounded Table, has always represented a unique lure. Made in the aftermath of Kahlo’s divorce from Diego Rivera, the artist depicted her grief by painting herself sitting at a long table that is held up by human legs and covered in bleeding sores. The canvas, however, has been famously missing ever since Kahlo donated it to the former Soviet Union. This week, the Associated Press reported that a Spanish art dealer is claiming that he has the original painting in storage, but experts consulted by the AP say that this supposed “original” is likely nothing more than a copy.

SEE ALSO: Can Frida Kahlo Be Separated From Her Commercialized Image?

The dealer who is selling the work, Cristian López, told the AP that “whoever proves genuine interest and the ability to pay the figure of 40 million euros, can spend as much time as wanted with their experts analyzing the work.” However, it’s clear to experts that there are distinct differences between the photograph of the painting proffered by López and older photographs of the original painting. Additionally, López is offering a work on canvas, whereas Kahlo’s original was known to have been painted on wood.

Susana Pliego, the director of cultural programming at the Casa de México in Madrid, is certain that López’s offer is likely nothing more than a wild goose chase. “Fridamania has been a marketing invention,” Pliego told the AP, “because her paintings are sold so expensively, someone makes a proposal to see if anyone falls for it.”

Even though nefarious instincts cause dishonest dealers to try to make a quick buck, it’s easy to understand why everyone is so captivated by The Wounded Table. It’s Kahlo’s only other large painting besides The Two Fridas, and Table‘s spectacularly gothic surrealism telegraphs Kahlo at her most imaginative. The Frida in the painting is flanked by her sister Cristina’s two children; a reflection of the artist’s desire for children of her own. On the painting-Frida’s other side is a Nayarit figure and a Judas figure representing her ex-husband, and his betrayal. But the bleeding, peg-legged table feels like the most important innovation: this is Kahlo taking Biblical imagery and the perils of domestic discord and combining these themes to make them entirely her own. 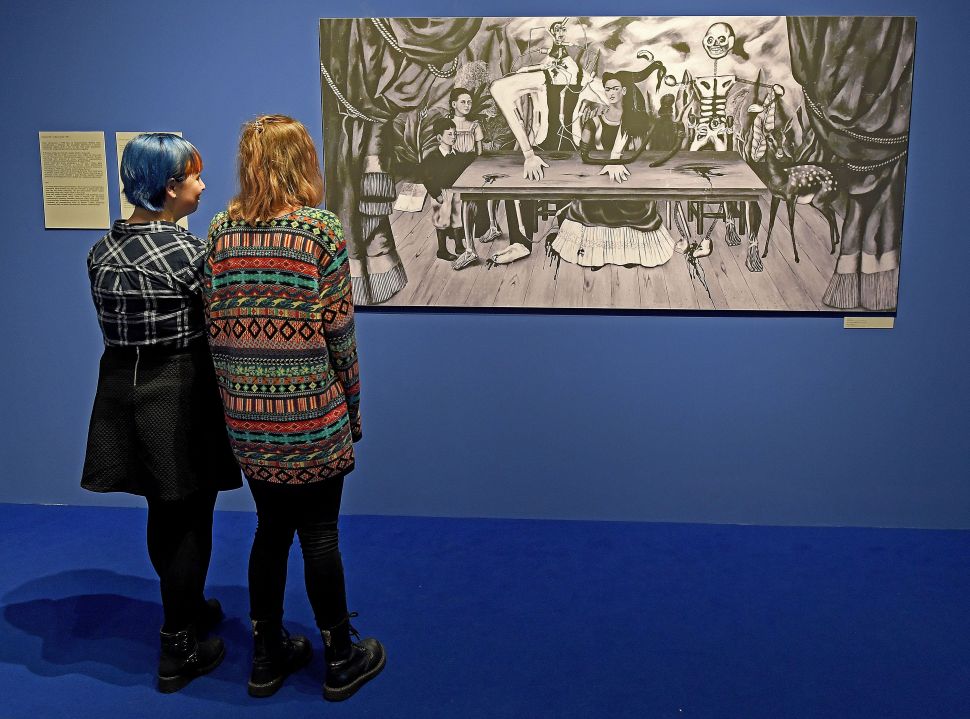