Tom Hanks has affectionately held the post of America’s Dad for close to a decade, but didn’t fully embrace the vaunted title until he hosted Saturday Night Live in 2016. It was there, in a precursor to his Oscar-nominated work as Mr. Rogers last year, that he threw on a sweater and gave this country a pep talk in his opening monologue. According to our meticulous research, every single American soul woke up the next morning feeling a bit better about the state of the world.

As America’s Dad, Hanks has toyed with the proverbial Dad Movie—a simple, straightforward concept that usually involves a World War or another historical true story that imparts some sort of moral wisdom on the viewer, often in vaguely paternal fashion—for years without ever fully diving in with both feet. Captain Phillips, Saving Mr. Banks, Bridge of Spies, Sully are all vaguely Dad-esque in their upstanding morality, whimsy, or matter-of-fact storytelling, but not full-blown Dad Flicks for one reason or another. (Key Dad Movie examples include Ford v Ferrari, Rudy, Field of Dreams, Miracle.) But as Hanks, who turns a spry 64-years-old on July 9, continues to age, he’s transitioned beautifully into his Old Man on a Mission phase. Greyhound, which Apple TV+ acquired for a whopping $70 million, firmly cements this transition.

While Tom Cruise (58), Denzel Washington (65), and Liam Neeson (68) have maintained blockbuster appeal with a series of Old Man Action Movies, Hanks has pivoted towards playing beloved and/or heroic real-life American figures to do the same. In Greyhound, he plays Captain Ernest Krause, an inexperienced U.S. Navy captain on his first command tasked with leading an Allied convoy stalked by Nazi U-boat wolfpacks in World War II. Ernest is far from a Superman, but he’s patient and competent, much like the film around him.

Greyhound isn’t as game-changing or compelling as Hanks’ earlier work with Robert Zemeckis, Steven Spielberg, Penny Marshall or Sam Mendes—films that challenged status quos or mined deeply emotional cores. Its characters are flat out of necessity and its shades are glaringly black and white, leaving you a bit empty. But it is efficient and economical as it mimics its Navy subject matter in its intense focus on the precision of operation. Just as the bridge of a battleship hums from task to task with assembly line-like productivity, so too does Greyhound, a 92-minute series of chess moves between opposing forces. Action, counter move, attack and parry. A bit flavorless in characterization, but entirely competent in the procedural work.

There’s little doubt that the vast seas and skies and hail of winds and bullets would have been better suited for the big screen. Witnessing the rolling, crashing waves and the hulking man-made mechanical leviathans of Greyhound succeeds in reminding you what movie theaters are best used for. But Hanks guides you through it all with the steady calm and control of a veteran Dad, a man whose job it is to make his crew feel safe even when he is afflicted by self-doubt.

Greyhound avoids delving too deeply into Ernest’s own insecurity as an inexperienced Captain thrust into extraordinary circumstances. The script, written by Hanks himself, is stripped bare and streamlined so as to move as swiftly as the subs his character stalks. His inner turmoil instead manifests itself in a lack of appetite throughout the film, a practical expression if nothing else. What is surprisingly solid is that Greyhound is very much about surviving failure and valuing life over victory. Ernest must constantly make the tough choice between saving innocent lives or barreling forward with the mission. He laments his choices as not being good enough, to which his second-in-command appropriately points out, “What you did yesterday got us to today.” You don’t need to be perfect to get the job done and completing the job also means accepting loss along the way.

Greyhound doesn’t move you emotionally the same way a war film like Hanks’ own Saving Private Ryan, but it does fulfill its purpose. Outside of the screen, it also offers Hanks another leading vehicle, which is increasingly rare for 60-something actors not willing to jump out of helicopters and the like. Hanks will always have greatness within him, but if the remainder of his career is occupied by feel-good Dad movies that do just enough to simply satisfy, well, that’s okay too. 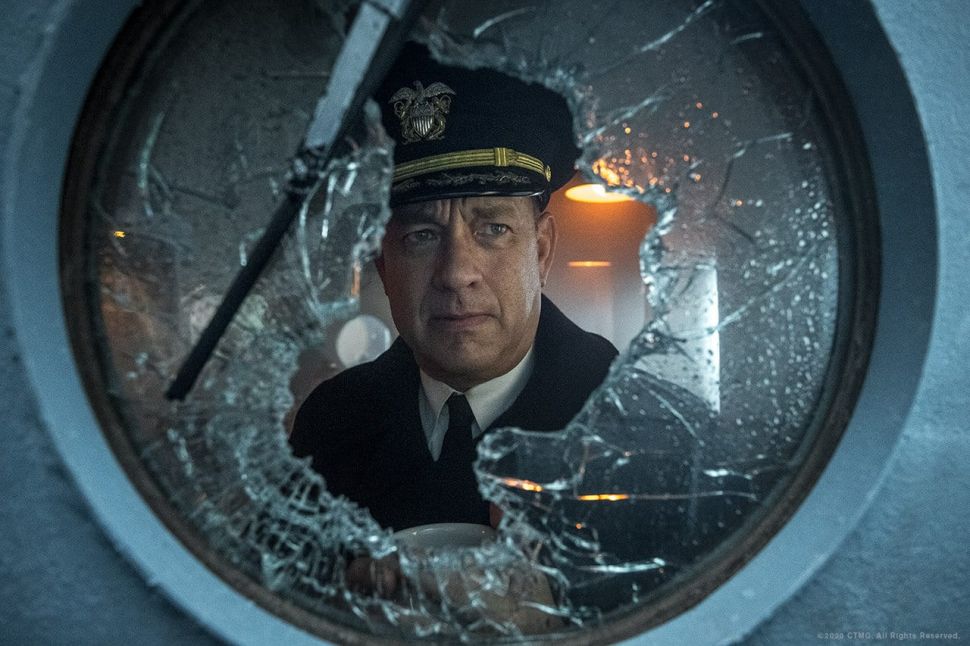