Good news, folks: the filmed version of Hamilton arriving on Disney+ this weekend to coincide with Independence Day is superb. That’s the most critical piece of information we can relay to you, but it isn’t the only important detail. The story surrounding Hamilton‘s migration from Broadway to the Mouse House is a fascinating one on its own and you’ll need to be prepped and ready for your Hamilton marathons this weekend. As such, here are the essential details you need to know.

Why Is Hamilton such a big deal?

Hamilton is considered the first of its kind as a Hip-Hopera, a show that blends elements of rap, hip hop, R&B, pop, jazz and musical theater. Inspired by the 2004 biography Alexander Hamilton by Ron Chernow, its unique musical style quickly propelled it to phenomenon status upon its arrival five years ago. Creator Lin-Manuel Miranda also cast non-white actors as Founding Fathers and other historical figures, enlisting a diverse cast of performers.

Hamilton premiered at the Public Theater, Off-Broadway on February 17, 2015 and had transferred to the famed Richard Rodgers Theater by August 6 of the same year, a remarkably quick transition to the big leagues. At the 2016 Tony Awards, Hamilton received a record-setting 16 nominations, eventually claiming 11 awards on the night, including Best Musical. It received the 2016 Pulitzer Prize for Drama. It has since been recreated in Chicago, the West End in London, and other key global locations. As of January 2020, shortly before the coronavirus pandemic shutdown Broadway in March, Hamilton was the seventh highest-grossing Broadway musical of all time with $622.4 million in gross ticket sales, per TheWrap.

“No other artistic work in the last decade has had the cultural impact of Hamilton—an inspiring and captivating tale told and performed in a powerfully creative way. In light of the extraordinary challenges facing our world, this story about leadership, tenacity, hope, love and the power of people to unite against the forces of adversity is both relevant and impactful,” Bob Iger, Executive Chairman of The Walt Disney Company, said in May. “We are thrilled to bring this phenomenon to Disney+ on the eve of Independence Day, and we have the brilliant Lin-Manuel Miranda and the team behind Hamilton to thank for allowing us to do so more than a year before planned.”

How did Hamilton end up on Disney+?

In February, it was announced that Disney had spent a jaw-dropping $75 million for the filmed version of Hamilton, the largest single-film acquisition in movie history. The filmed version, captured over the final two weeks of the original cast’s run, was initially going to receive a theatrical release in October 2021.

“Our biggest issue has always been accessibility,” Miranda said on Good Morning America following the news. “I am really glad we had the luxury basically to shoot an independent film in the first year and now the world can see what it felt like to be in that room in June 2016.”

However, due to the coronavirus pandemic, the decision was made to reroute the film to Disney+ and release it this weekend.

When exactly will Hamilton hit Disney+?

“An unforgettable cinematic stage performance, the filmed version of the original Broadway production of Hamilton combines the best elements of live theater, film and streaming to bring the cultural phenomenon to homes around the world for a thrilling, once-in-a-lifetime experience. Featuring a score that blends hip-hop, jazz, R&B and Broadway, Hamilton has taken the story of American founding father Alexander Hamilton and created a revolutionary moment in theatre—a musical that has had a profound impact on culture, politics, and education. Filmed at The Richard Rodgers Theatre on Broadway in June of 2016, the film transports its audience into the world of the Broadway show in a uniquely intimate way.”

It’s an American holiday weekend, so you might as well stay up late to catch the show.

Who stars in Hamilton?

Remember, this is not a film adaptation of the Broadway play. This is a filmed version of the Broadway play, the majority of which was captured live in front of paying audiences at the Richard Rodgers Theater. The movie provides viewers with the best seat in the house thanks to a series of well-edited close-ups, wide shots, and roving camera movement that puts you as close to the action as can be.

“We filmed a live performance with cameras in the audience on a Sunday matinee,” Miranda said on GMA. “Then the audience left and we continued to film close-ups, dolly shots and crane shots all night Sunday and all day Monday. We filmed close-ups and steady cam — and all the coverage you would want to get in a movie on our day off on Monday — continuing to film Tuesday morning. All the way to another live show Tuesday night with all the cameras in the audience in different positions.”

Disney is literally putting us in the room where it happens (sorry, had to).

How to watch Hamilton on Disney+

Disney+ is The Walt Disney Company’s standalone streaming service currently available in North America and select countries around the world. On its own, the service costs $6.99 per month, which compares favorably to Netflix’s most popular package ($12.99 per month). Consumers can also opts for the Disney bundle, which includes Disney+, Hulu, and ESPN+ for $12.99 per month. If you do not subscribe to Disney+, you will not be able to watch or live stream Hamilton. 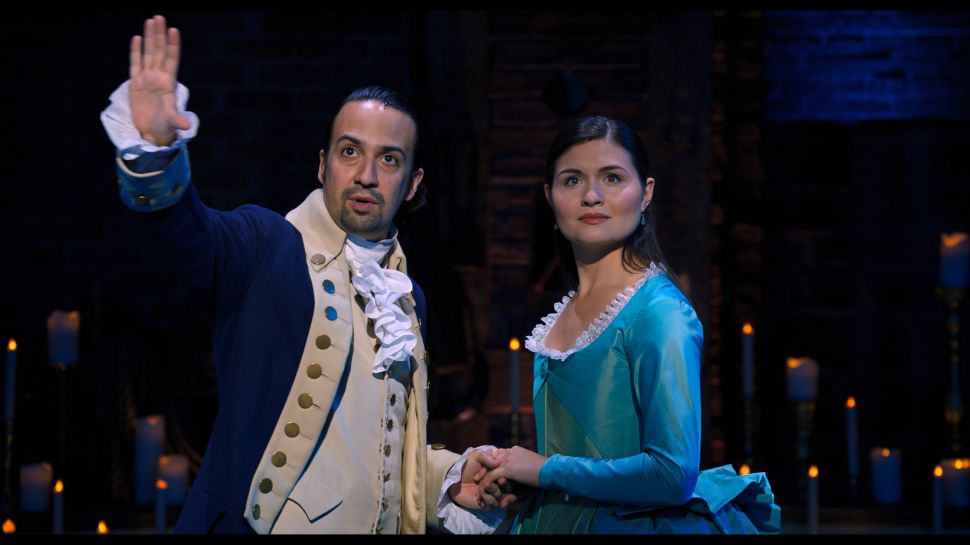