Since 1999, pedestrians in London have been able to expect periodically captivating works of art from Trafalgar Square’s Fourth Plinth Project, which allows contemporary artists to have their most ambitious public works seen and appreciated on a wide scale. Although installation was delayed four months by the novel coronavirus, London residents now have the chance to see The End, an enormous new sculpture by the artist Heather Phillipson. Phillipson’s creation gives off the illusion of tantalizing precariousness: atop a huge dollop of steel and polystyrene melting whipped cream sits a cherry, a drone and a fly.

On top of its engaging visual ambiguity, The End also has a few hyper-modern additional qualities: the drone atop the sculpture is rigged with a camera producing a live feed of the surrounding area, meaning that the work of art is literally surveilling its audience. The End also has the distinction of being the first Fourth Plinth commission to be fully accessible to the visually impaired; there’s a braille panel on sculpture’s plaque and an audio description of the artwork online.

Phillipson told the Guardian she got the idea to create the sculpture in the wake of the 2016 United States presidential election. “For me, we’ve been at a point of some kind of entropy for a long time,” Phillipson said. “When I was thinking of this work there was a sense for me of an undercurrent that was already there…this feels like a continuation of that.” Plus, the artist elaborated that the sculpture’s title didn’t necessarily indicate doomsday. “In the end there is the possibility of something else forming,” Phillipson continued. “There’s the chance of radical change inside any ending…there is potentially hope for something else.”

People anxious to visit the sculpture in person have a long time in order to do so: Phillipson’s sculpture will remain in Trafalgar Square until the spring of 2022. Plus, you can access  The End‘s livestream, captured by the drone’s cameras, from anywhere in the world—engaging with art by spying on unsuspecting passers-by in true dystopian fashion. 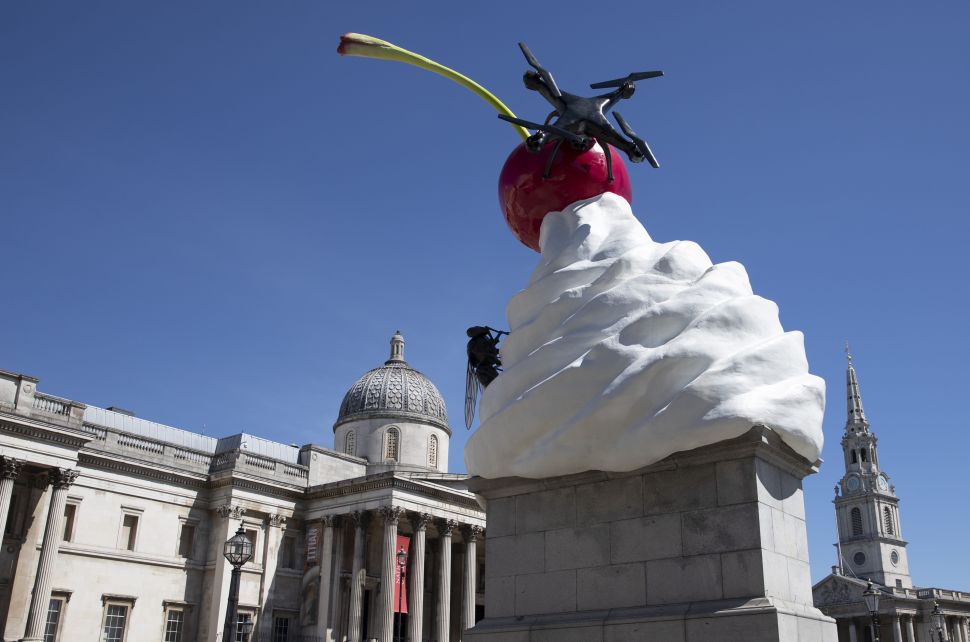