I’m always baffled by applause at magic shows. Appreciative clapping never seems the proper response to the base trickery by which a magician guesses the card in my hand or regenerates a rope cut into pieces. I will gladly cheer a barnstorming speech or virtuosic dance, even circus acrobatics—but my own gullibility? Nevertheless, illusionist Helder Guimarães had me slapping my paws together like a five-year-old at The Present, his gently bedazzling Zoom solo from Los Angeles’s Geffen Playhouse.

The setup for The Present is designed to intrigue. After you buy a ticket, the Geffen mails you a “mystery package”—a small cardboard box wrapped in twine. At the performance, you enter the secure Zoom meeting and are checked in by a friendly concierge. As you wait for show time, you scan fellow audience members filling up the virtual gallery (each group numbers 25); it’s not so different from theater in the round or traverse seating, with spectators facing each other.

SEE ALSO: ‘Hamilton’ Review: Did the Hit Musical Throw Away Its Shot on Disney+?

Eventually our perky prestidigitator appears at a table upon which is fanned out a deck of cards. Speaking in a Portuguese accent with excellent diction, the youthful Guimarães resembles a helpful librarian or Lisbon tour guide—nice but formal, trivia at the ready. Early in his 80-minute display of close-up magic, Guimarães instructs you to open the package, which contains, among other things, a pack of cards and a word puzzle.

Memories mingle amusingly with feats of mentalism and conjuration that baffle logic and imply supernatural origin. As a boy, our host survived being hit by a car but lay in a coma for three days. Recuperating at home, the young Guimarães spent time with his grandfather, a methodical retiree and stamp collector who sparked the kid’s interest in cards. The grandfather would also try to solve the daily word jumble in the newspaper, which leads to the prop puzzle in our box and Guimarães guessing the word chosen by one of the audience members.

How to describe the contents of the show (gracefully staged by Frank Marshall) without spoilers? (The Present is sold out through October 11, but the Geffen suggests entering the weekly lottery.) Playing cards morph from one suit and color before your eyes, arranging themselves in numerical order by some mystic alchemy. The cards in your possession—even torn in half and repeatedly shuffled—are controlled by Guimarães’s all-seeing gaze. A woman in the audience hid a pack in her apartment, later opened it, and found a card that… no, I can’t explain it. I’m starting to sound insane.

It’s a challenge to review an event in which the illusionist achieves effects I can’t even begin to explain. (“He fooled me: five stars!”) I can better account for how and why Stephen Sondheim wrote “A Little Priest” in Sweeney Todd than legerdemain which defies the laws of physics and statistical odds. And yet, my rational mind knows there’s a logical, empirical explanation to the trick, whereas creative genius will always be an intangible mystery.

Paradoxes like these make me admire magicians while resenting them on intellectual grounds. However, if you can let go of such churlish biases (we need escape where we can get it), the wry, gentle humanism of The Present is a treasure. The wizardly Guimarães creates a brief, enchanted circle in which you and two dozen others may partake of great wonder and flashes of wisdom. 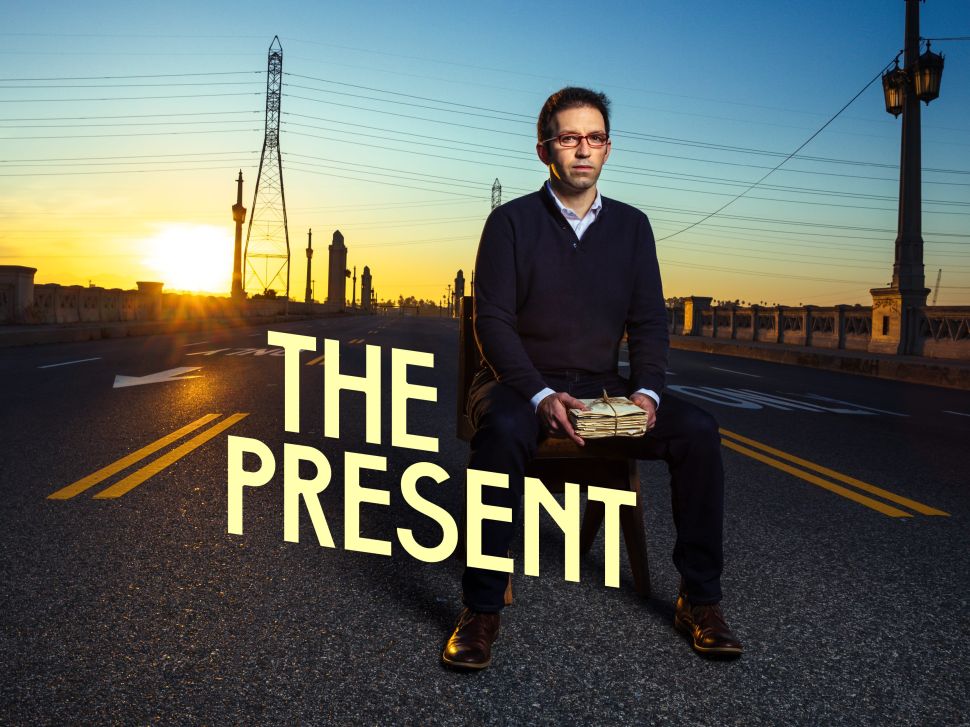